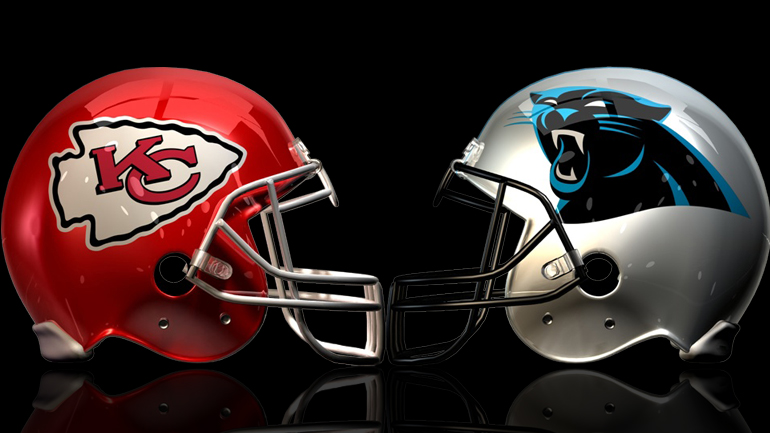 Sunday’s matchup between the Carolina Panthers (3-5) and Kansas City Chiefs (6-2) at Bank of America Stadium, serves as a must-win game for the Panthers.
After a 1-5 start, Carolina is trying to keep their playoff hopes alive. They have won two straight, picking up victories against the Cardinals and Rams, however, neither team  has winning records. The Panthers strong defensive line has only allowed 3.3 yards rushing per rushing attempt. Offensively, Carolina’s own rushing game that features Jonathan Stewart has averaged nearly 110 yards per game.
A MondayMorningQB.com article gave reasons why the Kansas City Chiefs are the NFL’s most complete team. A defense led by linebackers Justin Houston and Tamba Hali and Safety Eric Berry and an offense led by Travis Kelce, Jeremy Maclin and Alex Smith–The Chiefs are riding a four-game winning streak and remain unbeaten at home, allowing the Chiefs to keep pace with the AFC West-leading Raiders.
The Chiefs offense are 15th in points per game. 19th in yards per game. 20th in yards per play and first downs per game. 23rd in third-down conversion rate. Though KC’s offensive stats does not jump out at you, they have remained solid on that side of the ball. They can come through in key moments and they’ve proven they value protecting the football. Their seven giveaways are third-fewest in the NFL. Quarterback Alex Smith will be making his return under center after missing the Chiefs week 9 victory against the Jaguars due to injury. Backup Nick Foles took the start and threw for 187 and a touchdown in that game.

Keys to the game for the Chiefs:

The big problem is Kansas City’s defense against the run. It has been ugly, allowing 4.8 yards per attempt. Only the Washington Redskins and San Francisco 49ers have been worse. If the Chiefs can neutralize the Panthers dual-threat of Newton and Stewart, they’ll keep themselves in position to win.

Carolina led the league in turnover differential last year, but that has not been the case in 2016. The Panthers are -6 in turnovers, largely because of seven fumbles to go with 10 interceptions (six from Cam Newton). I expect the Chiefs defense to force Newton to throw the ball.

.Keys to the game for the Panthers:

The Panthers are always going to be a challenge on the ground. Carolina has a dual-threat in Cam Newton, who is on pace to rush for nearly 500 yards. Combine him with Jonathan Stewart, and it’s a potent attack. However, the offensive line is poor and holding them back, with Stewart averaging only 3.7 yards per attempt. As a team, the Panthers rank 18th with 4.1 yards per carry, while the Chiefs sit 21st at 4.0.

Get the pass rush going:

Carolina now ranks fourth in the league in sacks. They came up with just 12 sacks over the 1-5 start but have recorded 12 in their last two victorious wins. They’re now on pace for 48 sacks.