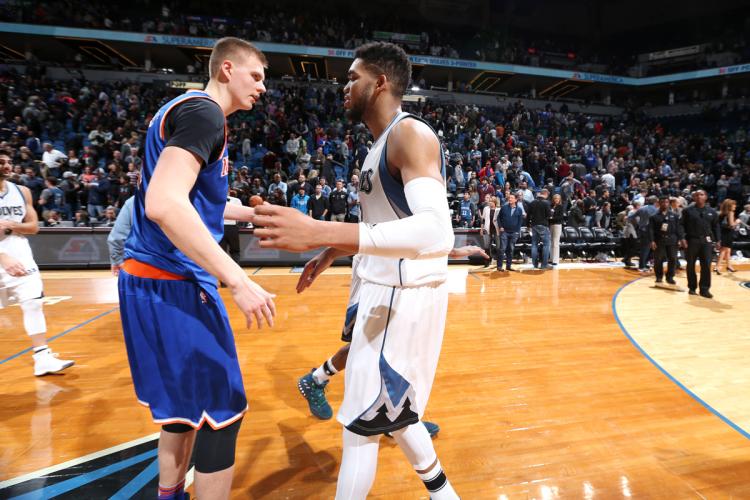 Kristaps Porzingis and Karl Anthony-Towns are two of the best players drafted in the 2015 NBA Draft. Towns and Porzingis finished one and two respectably in the NBA Rookie of the Year voting in 2015. Blowing away the competition was Towns who finished with 650 total vote points and taking all 130 first-place votes becoming the 5th unanimous Rookie of the Year in NBA history. Other players to accomplish this feat, Damian Lillard (2012-2013), Blake Griffin (2010-2011), David Robinson (1989-1990) and Ralph Sampson (1983-1984) who are all great players in their own right. Porzingis finished the voting with 363 vote points and 117 out of 130 second-place votes.

Towns averaged 18.3 points, 10.5 rebounds which were the best by any rookie in 2015. Towns also led all rookies in double-doubles (51) and finished second in blocks at 1.68 per game. Having 51 double-doubles is really a telling stat to me because it’s rarely ever done this early in a career and shows his effort on the glass which I think is all important for big men. He also played all 82 games last season, the only rookie to do such and one of only 18 players in the entire NBA to do such. Durability is a major factor in determining a big man’s greatness because as we seen in history, injuries can ruin a career (Yao Ming, Greg Oden, Eddy Curry and others).

Porzingis was the most surprising selection of the 2015 NBA Draft being that not many Americans ever heard his name before let alone watch any tape of his style of play. After selecting him 4th in the draft behind D’Angelo Russell (2nd pick) and Jahlil Okafor (3rd pick), the legendary former NBA coach and now Knicks’ General Manager Phil Jackson said that Porzingis was “3 or 4 years away” which frighten most if not all Knicks fans but boy was he wrong. NBA Commissioner Adam Silver announced his name at the Barclays Center in Brooklyn, New York, the many Knicks fans in attendance booed him out of ignorance but he didn’t let that deter him from the challenge. After jumping out the gates to a fast start in October/November, December and January he won the corresponding Rookie of the Month. Also set an All-Time Rookie record ending the season with 1,000+ points, 500+ rebounds, 75+ three-pointers made and 100+ blocks; a truly amazing accomplishment. Porzingis averaged 14.3 points 7.3 rebounds and 1.9 blocks in his Rookie year; a very solid start to a promising young career.

Porzingis and Towns are off to fast starts in 2016. Porzingis is averaging 20.6 points and 7.4 rebounds and Anthony-Towns is averaging 22.6 points, 10.2 rebounds. My personal synopsis of their future is I think Porzingis has a higher ceiling than Towns.

Towns has a reliable jumper for a seven-footer, quick feet with good use in both hands and an array of back-to-the-basket and face-up post moves. The only aspect of his game that maybe could improve is his tenacity on defense. Averaging only 1.5 blocks a game this year, Towns could takeover more on the defensive end of the floor as well as offensively if he really wants to make the Minnesota Timberwolves a real contender in the Western Conference.

Meanwhile, Porzingis is a 7’3 mobile big shooting 40% from three-point this season. His post game is slightly under-developed but possesses a decent jump hook, which is where you need to start to build a proper post game and is working on stealing Dirk Nowitzki’s patented one-legged fadeaway.

Right now Towns is the better and more talented player I can’t deny that. But sit back and think, how much room does he really have to grow? Porzingis can still improve defensively, improve on the block, become a more consistent scorer and rebounder; I think his potential knows no bounds. As of  2016 Towns is the better player but I challenge you to revisit this article in 3-5 years and you’ll see major growth in Porzingis that you won’t see in Towns.