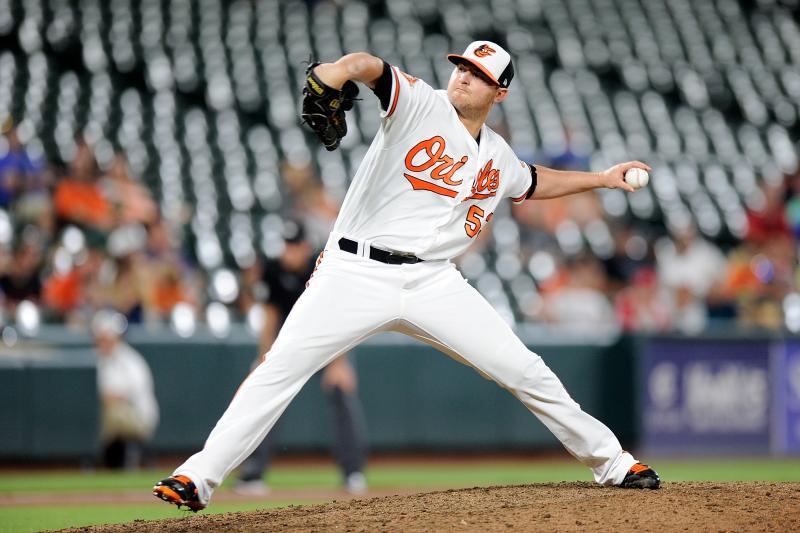 According to a report from FanRag Sports’ Jon Heyman, the Los Angeles Dodgers and Chicago Cubs have interest in Baltimore Orioles closer Zach Britton.

Britton, 29, went 2-1 last season, with 2.89 ERA in 37.1 innings pitched. He battled through forearm and knee injuries for the majority of the season. It was a drop from his magnificent 2016 season, where he led the American League in saves (47) and had the lowest ERA among ML relievers (0.54).

Heyman stated in his report:

The Orioles are said to be willing to at least listen on Britton since they need to reallocate monies for the rotation, he’s expected to get upwards of $13 million via arbitration after making $11.4 million last year — high for a small-to-medium market like Baltimore — and he’s a free agent after the year.

The Dodgers were one of the prime players for Britton last summer, but ultimately they traded for two lefty relievers instead — Tony Cingrani and Tony Watson. The Orioles had a tentative agreement with the Astros at the July 31 deadline, but Baltimore pulled out of it, either due to the medicals of players coming from Houston or owner Peter Angelos’ cold feet — or both. Angelos remains a wild card who could ultimately decide he doesn’t want to trade Britton, but it makes sense to shop him now, at the very least.

The Cubs are in need of a closer with Wade Davis a free agent, and last year were happy to take Davis on a one-year deal in a trade with Kansas City, a deal that worked out nicely for Chicago. Greg Holland is the other star free agent closer on the market, which is deep in bullpen arms but not star closers, meaning Britton could bring a decent haul.

Last season, the Orioles almost moved Britton to the Houston Astros for infielder Colin Moran and other players, but the deal fell through. There were conflicting rumors that the trigger wasn’t pulled due to Baltimore’s ownership being unwilling to part with Britton and Houston’s management being unwilling to move coveted prospects.

At this point now, however, the Orioles could gain a great deal from a trade with Los Angeles or Chicago and I don’t think that they will balk at the ability to improve their team. Baltimore desperately needs starting pitching, with the departure of Chris Tillman, Wade Miley and Ubaldo Jimenez and the fact that Baltimore had the 27th-ranked ERA in the MLB in 2017.

he Dodgers currently have four starting pitchers among their top-10 prospects in Walker Buehler, Yadier Alvarez, Mitchell White and Jordan Sheffield. The Cubs have eight different pitchers in their top-10 in Oscar De La Cruz, Jose Albertos, Adbert Alzolay, Alex Lange, Brendon Little, Thomas Hatch, Trevor Clifton and Justin Steele. It’s a possibility that of all of these names, a few could be headed to Baltimore’s system.

Though they may move Britton, the Orioles could still have an extremely successful bullpen and be able to build upon their starting pitching in the process.