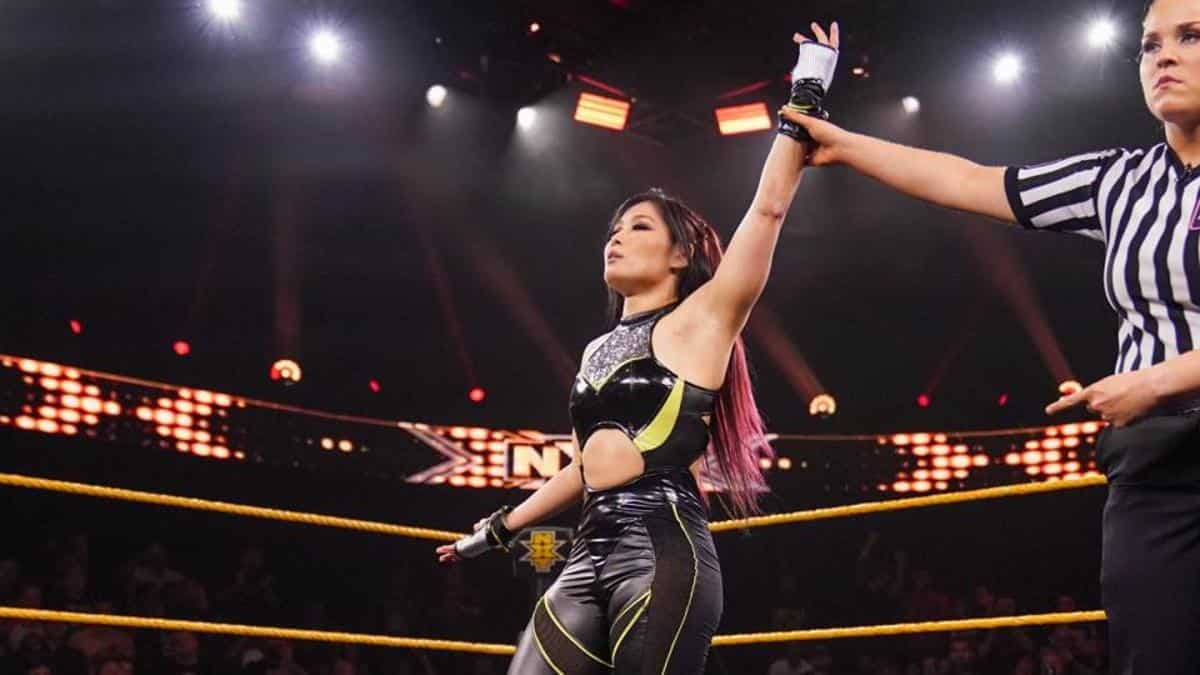 Io Shirai won the NXT Women’s Championship in the main event of NXT TakeOver: In Your House on June 7th and now she has a big target on her back. What can we expect from Shirai’s reign?

Shirai challenged Charlotte Flair for the NXT Women’s Championship on the May 6th episode of NXT. “The Genius of the Sky” earned that opportunity after beating Candice LeRae, Mia Yim, Tegan Nox, Dakota Kai and Chelsea Green in a Six-Woman No. 1 Contender ladder match on April 8th.

Shirai’s in-ring skills, charisma and great look make her a deserving champion. She’s paid her dues and her matches in NXT never disappoint. Shirai has been in WWE since 2018 and she’s proven that she can succeed as a face or as a heel.

This is Shira’s time, she’s been very entertaining since turning heel last year. The problem was that she always had someone take the spotlight from her since debuting in NXT.

She lost in the 2018 Mae Young Classic Final against Toni Storm. Then, Shayna Baszler was a step ahead of her in their NXT Women’s Championship matches last year, with her friends Marina Shafir and Jessamyn Duke making them unfair fights.

This was a blessing in disguise for Shirai because it led to her heel turn when she attacked her former best friend Candice LeRae. Baszler was still the top heel in NXT and Rhea Ripley just debuted as the top face in the brand. This meant that it wasn’t Shirai’s turn on top but she kept thriving.

Now Io Shirai finally has her first championship in WWE and she should a have long, dominant reign. Shirai and Sasha Banks main evented NXT The Great American Bash Night 1 and delivered an instant classic. Their dream match ended with Shirai on top after Asuka appeared and spit green mist into Banks. This gave Shirai a chance to deliver her moonsault and pin Banks.

Tegan Nox has been getting a decent push as of late and she is a future NXT Women’s Champion in my eyes. Just not yet. Nox beat Dakota Kai, Mia Yim and Candice LeRae in a Fatal 4-Way Elimination Match to earn the right to challenge Io Shirai.

Nox, Mia Yim and Shotzi Blackheart got defeated Candice LeRae, Dakota Kai and Raquel González in an entertaining Six-Woman Tag Team match at NXT TakeOver: In Your House. She hit the Shiniest Wizard on Kai and pinned her to pick up the victory for her team.

“Lady Kane” then fell short alongside Blackheart in their bid to become WWE Women’s Tag Team Champions a few weeks ago but it was an incredible match and she proved that she can keep up with Bayley and Sasha Banks.

Kai cut promos after these matches, saying that she’s after Io Shirai’s NXT Women’s Championship. She didn’t appreciate that NXT General Manager William Regal made her face Nox, Yim and LeRae to earn the match. Dakota Kai clearly has unfinished business with Tegan Nox and I can see her and Raquel González getting involved on Wednesday’s NXT Women’s Championship match, attacking Shirai and Nox.

This is the best possible outcome for this match. It makes perfect sense because Shirai and Nox would keep their momentum going and this establishes Kai as a threat. It can lead to Io Shirai and Tegan Nox facing Dakota Kai and Raquel González in a tag team match. Also, NXT would have former best friends Nox and Kai trying to prove that they deserve a shot at Shirai.