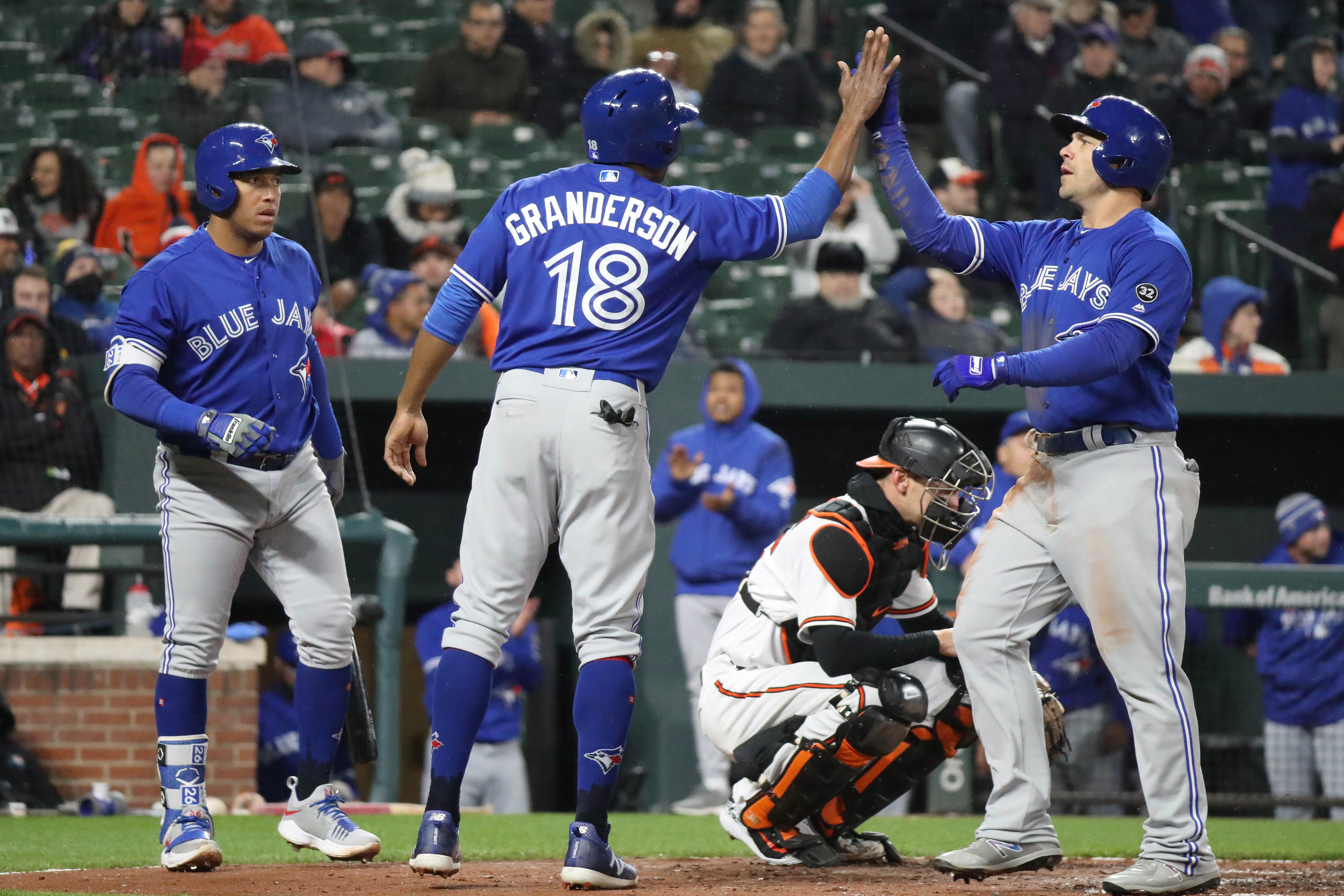 The Baltimore Orioles fell apart in the ninth inning for a 7-1 loss in front of the smallest crowd in the history of Oriole Park at Camden Yards.

BALTIMORE – Josh Donaldson‘s fourth career grand slam put a rather close game out of reach in the top of the ninth inning for the Baltimore Orioles as the Toronto Blue Jays picked up a 7-1 win in front of the few Orioles faithful to come to the ballpark on Monday night.

The team announced the attendance at 7,915, the smallest paid crowd in Oriole Park at Camden Yards history, outside the no fans game in 2015. It was very cold in Baltimore, to say the least. It was 44 degrees at first pitch and there was some rain mixed throughout most of the game.

The Orioles had their chances to take a lead several times in the ballgame, but could not come up with the clutch hit to get runs on the board. Baltimore finished the game with nine hits, but also left 11 players on base and were 0-for-12 with runners in scoring position. Furthermore, they strikeout numbers continued to rise.

J.A. Happ struck out the side in the first two innings, a concerning trend of Oriole hitters going down on strikes. Happ would finish the ballgame with nine strikeouts, and the O’s struck out a total of 11 times on the night. Baltimore led the Majors in the category entering the night, and have increased their lead in that department with another game with double-digit strikeouts.

Orioles starter Dylan Bundy was also mowing down the competition in the early part of the game, striking out the side in the third, but not before giving up a couple runs as it was in the third inning that both teams put their first runs on the board. Former Oriole Steve Pearce sent a 3-0 fastball into the left field seats with a man on base to make it 2-0 ballgame. It was the third home run of the season for Pearce, who continues to excel whenever he plays at Camden Yards.

Manny Machado answered as the leadoff hitter in the bottom half of the inning with a no-doubt-about-it home run to left field that cut the Jays lead to 2-1. It was an absolute laser from Machado as the exit velocity was 111.5 mph on the 437-foot homer. The Orioles shortstop now has four home runs on the young season and is batting .316 with 10 home runs in 44 career games against Toronto at Oriole Park.

Baltimore looked to have a great opportunity to at least tie the ball game in the sixth, but Adam Jones could not capitalize with the bases loaded on a controversial call at first base. The Orioles center fielder was hit in the back on the throw to first base and was ruled for interference to end the inning. If the interference call was not made, the O’s would have tied the game. Buck Showalter was visibly upset with the call and spent several minutes talking with tonight’s umpire crew.

“By the letter of the law, yes,” when Showatler was asked if he agreed with the call at first base. “Umpires are calling the way their instructed to call it. I understand that, but it’s just not fair to the runner… Just about every hitter, especially right-handed, is going to start out away from the bag. So in other words, you’re being asked to run longer than 90 feet to get to first base to get back into the line… It’s just one of those things that’s just not fair.”

Both starting pitchers continued to rack up the punch outs in the middle innings before making way for the bullpen. Happ finished with nine strikeouts in his six innings of work, while Bundy tallied 10 strikeouts in his seven innings. It is the fourth time in Bundy’s career that he reached double-digit strikeouts. He pitched seven innings, allowing the two runs on four hits and two walks. Despite sporting a 1.35 ERA to start the 2018 season, the O’s Opening Day starter has yet to record a win.

“He was outstanding,” said Showalter about Bundy’s performance. “He was great. He was outstanding at a time of need. He knew what was at stake with five or six guys down in the bullpen that weren’t going to pitch tonight.”

Danny Barnes come on in relief of Happ in the seventh inning for Toronto and the Orioles quickly had a runner in scoring position following back-to-back singles by Trey Mancini and Machado. Jonathan Schoop got good wood in the ensuing at bat, but it was in the vicinity of Kevin Pillar, who can cover a lot of ground and made the out. Jones had a chance to redeem himself in the next at bat, but the Orioles captain lined out to left to end the threat.

Mychal Givens came on to pitch the eighth and ninth, and loaded the bases in both innings before being pulled with bases loaded and two outs in the ninth. Nestor Cortes would relieve Givens, and it could not have gone any worse for Baltimore. The Rule-5 reliever walked in a run just before Donaldson hammered one to straight center for a grand slam to make it 7-1 in the final frame. Givens was charged with three runs and his ERA has ballooned to 7.04 this season.

“We did real well until it got away from us at the end,” Showalter said. “Mychal was having trouble gripping the ball a bit, but it’s kind of the situation we are in… We had a chance to win it though. Had a chance to overcome it, but just couldn’t get that big knock.”

Kendrys Morales left the game with a right hamstring tightness and it was later revealed that he has a grade one strain. He will be re-evaluated by the Blue Jays medical staff tomorrow.

The Orioles announced before the game that they have recalled Hunter Harvey from Double-A Bowie and optioned Tanner Scott to Triple-A Norfolk. With the Orioles playing two games in extra innings in New York, depth was needed in the bullpen as Showalter hinted that as many as five relief pitchers would be unavailable tonight. Buck said if the Orioles would have gone to extra innings once again, Harvey would have taken the field for the first time.

Speaking of pitching, Alex Cobb participated in an extended Spring Training game against the Twins in Sarasota. He lasted six innings, allowing two runs (one earned) on six hits and a walk, with eight strikeouts on 93 pitches. He will make his Orioles debut Saturday against the Boston Red Sox.

Mark Trumbo also played in the extended Spring Training game as he makes his return from a . He went 2-for-3, with a walk and a home run. He will play the next two days in Bowie before a decision is made about when he will join the Orioles.

The two teams will square off in game two of the three-game set tomorrow evening in what should be another not-so-warm night. Andrew Cashner (1-1, 4.09 ERA) will be on the hill for Baltimore, while Aaron Sanchez (0-1, 5.40) will take the bump for Toronto. First pitch is scheduled for 7:05 p.m.