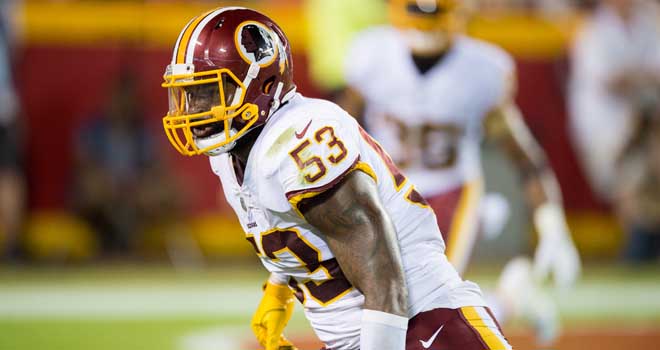 We take a look at the Washington Redskins pending free agents and whether or not they will be on the 2018 roster.

The NFL Draft Combine has now become a two-fold operation for NFL front offices. Along with scouting eligible players teams meet with free agents, theirs and others, to start to work on possible deals. Before a team can look at needs for the draft teams need to look at what free agents in house they want to keep and resign.

OL Tony Bergstrom- Bergstrom was one of the mid season offensive lineman signings that the Redskins had to make. Bergstrom ended up being the swing tackle after Ty Nsekhe was injured and ended up starting when Trent Williams could not dress and play. Bergstrom played well and should be brought back, especially if the Redskins lose Nsekhe. Keep

ILB Zach Brown- The biggest free agent question for the Redskins is Zach Brown. Both sides like each other but the problem however is money. Brown, who led the Redskins with tackles with 84 in 13 games, is rumored to be  looking for around $10 million a year. Unfortunately ILB’s are rarely paid at that level. Only the Rams Luke Kuechly, Seahawks Bobby Wagner, and Rams Alec Olgetree are paid at that level and the Redskins may not want to go that high. I feel that at $7 million a year for 3 years should get this deal done. If Brown walks then expect the Redskins to make a move for a ILB in the draft. Keep

LB Chris Carter- Carter made the team out of camp as a backup outside linebacker with the injury to Trent Murphy. Carter made his mark on special teams, playing in 13 games until a broken leg ended his season. With the uncertainty with Murphy and Junior Galette, bringing back Carter on a cheap deal would be smart. Keep

LB Will Compton- Compton has been the ultimate work hard player. Making the team as an undrafted free agent, moving from a great special teamer to a starting inside linebacker. Compton went back to a backup role when the team signed Zach Brown last season. Compton ended up playing in 9 games, starting 3, before going down with a season ending injury. If the team resigns Zach Brown, I believe the Redskins will still draft a LB and they will let Compton walk. If Brown somehow gets away, then the Redskins will resign Compton. Walk

OLB Junior Galette- 2017 was a prove it year for Junior Galette. When signed in 2015 Galette partnered with Ryan Kerrigan was going to solve the Redskins pass rush issues. An Achilles injury in 2015 and one to the other Achilles in 2016, it looked like Galette was never going back to his form from the New Orleans Saints. Galette proved his health by playing in all 16 games. While he finished with 3 sacks, he was a terror off the edge. Galette would like more opportunities to play and if he stays in Washington he will be behind Kerrigan and Preston Smith. The team would like him back but will another team make a huge offer and give Galette the opportunity to start? Keep

S Deangelo Hall- The longest tenured Redskin made a pretty good comeback in 2017. Recovering from an Achilles injury Hall spent half the year on injured reserve. When he came off Hall started the Seattle Seahawks game and played the entire game as a deep free safety. Hall started one more game but only dressing for five games with a few DNP’s. It looks like Hall’s career has come to an end and he should be appreciated for what he has done for this franchise. Walk

K Dustin Hopkins- Hopkins worked himself back from an leg injury. The Redskins signed Nick Rose and he performed well. However when Hopkins returned Rose was released and Hopkins was brought back. While Hopkins has a strong leg on kickoffs he missed his two field goals over 50 yards this season. Expect him to be signed but another kicker brought him to challenge him during training camp. Keep

G Shawn Luavao- Luavao was brought in 2014 as the big offensive line addition in Jay Gruden’s first year. While showing flashes of toughness and work in the running game, his pass block ability has been an issue. Luavao has never finished a season in Washington healthy and played in only nine games this season. I fully expect the Redskins to find a replacement for Luavao. Walk

TE Niles Paul- Paul since being drafted in 2011 as a wide receiver, has been one of the longest tenured and loved Redskins. Anything that has been asked of Paul he has done. Never being a starter, he has contributed on special teams and has lined up all over the offense. The Redskins would be wise to keep him around, if nothing than as a safety blanket for Jordan Reed. Keep

WR Terrelle Pryor Sr.- Pryor was a big free agent signing last season to help replace the losses of Pierre Garcon and Desean Jackson. Pryor, the converted quarterback, had just come off of a 1,000 yard receiving season with the Cleveland Browns. At 6’4″ and 4.4 speed, he was built to give QB Kirk Cousins another big target with Josh Docston to throw the ball to. On the first offensive play of the season Cousins and Pryor missed on a deep shot which was a sign of what was to come. A combination of badly timed drops from Pryor, mixed with a lack of throwing the ball into dangerous situations, Pryor did not have a good season. Most fans forget that Pryor is a converted QB so he is not a refined receiver yet. While I think Pryor is an exceptional talent that Alex Smith can use, I believe the Redskins will part ways with Pryor. Walk

WR Brian Quick- Another receiver signed to replace Garcon and Jackson. Quick made to active roster, however he was far down the depth chart and didn’t dress early in the season. When finally dressing he played on special teams and made a few catches on offense. Expect him to resign and try and make the roster again. Not sure he makes it but I expect him to sign. Keep

DT Phil Taylor- Taylor was trying to make a comeback with the Washington Redskins. Taylor was out of football for three years but the Redskins gave him an opportunity. Taylor was impressing during training camp and the preseason until he was injured. Wouldn’t be a bad move for either side to try one more time to see if Taylor can get back to form. Keep

The following players are restricted free agents which means they can negotiate with other teams, if they sign the Redskins can match.

S Deshazor Everett – Everett was originally signed as a cornerback by Tampa Bay in 2015 and the Redskins signed him to the practice squad and he made the roster later that season. Everett was moved to safety this officially this season he played in 14 games and started 8. Everett finished with 52 total tackles and should provide depth in the secondary. Stays

T Ty Nsekhe- Nsekhe was a major find for the Redskins. Originally signed by the Colts in 2012 after years in the arena league, Nsekhe was playing in the CFL when the Redskins found him. Nsekhe has turned into a important player as the backup swing tackle. He has started 11 games in three seasons for the Redskins. They would love to keep him around but a needy team may ask a higher price. Signed by another team.

The following player is an exclusive rights free agent.

G Tyler Catalina- Another one of the lineman shuffle of last season. Made the roster as the backup guard, ended up dressing in seven games and starting two. Expect him to be on the team through training camp for depth. Stays

Hopefully clarity on the free agents on the team will come quickly for the team as the new NFL year approaches.