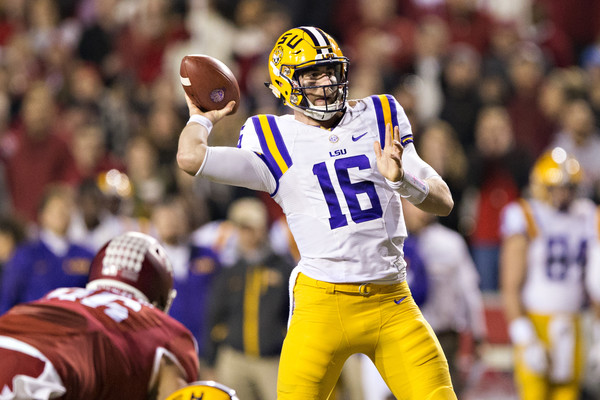 To get over a bitter loss to a rival, simply go out and take care of business in the next game. The 24th ranked LSU Tigers carried out that task on another SEC rival on Saturday night.

After a tough 10-0 loss to #1 Alabama last week, the Tigers took out their frustrations on the 25th ranked Arkansas Razorbacks (6-4, 2-4 SEC) 38-10 to improve to 6-3 on the season and 4-2 in SEC conference play. With a head coach Ed Orgeron-type mentality, LSU simply rode their dynamic duo at running back in Leonard Fournette and Derrius Guice to the tune of 390 rushing yards, with Guice getting a career-high 252 yards on just 21 carries.

The two backs combined for five rushing touchdowns as well, with the team jumping out to an early 21-0 second quarter lead behind Fournette’s two rushing touchdowns and one from Guice. Arkansas quarterback Austin Allen connected with receiver  Dominique Reed for a 44-yard touchdown on the very next drive to finally get on the board 21-7 with a little under six minutes remaining in the first half but the tone set by LSU was already established.

In a big way, the LSU defense came through as well by limiting Arkansas to just 291 total yards while also totaling three sacks and three turnovers.

Coming off a huge win over Florida last week, the Razorbacks were hoping to build off that win and get an even bigger win this week. However, Allen had himself a rough night by throwing for just 210 yards, one touchdown, and two interceptions and that productive Arkansas running game was held to just 81 yards.

As if a 31-10 lead wasn’t backbreaking enough, Guice’s 96 yard touchdown run in the fourth quarter with six minutes left in the game was a true knockout blow to the Razorbacks and was the cherry on top for the Tigers as they took home the Golden Boot trophy which is given to the winner in the LSU-Arkansas series.