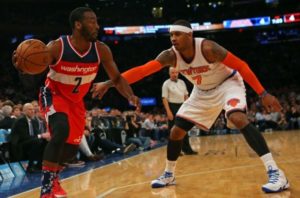 The Washington Wizards swept the season series with the New York Knicks with a 106-103 win.

Although the Knicks are out of the playoff race, they gave Washington a problem early.  They started the game outscoring the Wizards 14-12 in front of their home crowd.  The Wizards have been struggling on the road this season, but ended the first quarter on 21-13 run to take a six-point lead into the second quarter.

The Knicks only had two active starters in this game in Carmelo Anthony and Courtney Lee.  Washington took full advantage of that in this game.  In the second quarter, they maintained their lead by playing well on both sides of the ball.  At halftime, the Wizards shot 53 percent and held the Knicks to 38 percent.  This led to Washington leading 59-51 at halftime. Wall lead the team with 12 points and five assists.  Anthony led the Knicks with 12 points and four rebounds.

Every time the Knicks made a comeback, Washington had an answer.  After going MIA for the last couple of months, Marcin Gortat was having a good game.  At the end of the third quarter, Gortat had 16 points (7-7 from the field).  Despite the Wizards strong play throughout the quarter, New York only trailed by seven points after the third quarter.

The Wizards bench has been very good in the second half of the season.  That play continued with a 7-2 run to start the fourth quarter, led by Ian Mahinmi and Bojan Bogdanovic.  In spite of the good start, the Knicks would not give up.  They kept fighting back and cut the lead down to six points halfway through the fourth.  Head coach Scott Brooks made a gusty call by only having two starters in down the stretch in Wall and Gortat.  Bradley Beal came back in late, but New York had come within five points.  With 2:49 left in the game, New York tied the game up.  The rest of the game went back and forth with both teams wanting this win.

Holding On For Victory

Anthony hit a clutch jumper with 1:09 to tie the game.  However, Beal came back with a three pointer to give  Washington a three-point lead with 49 seconds left.  Anthony came right back to draw a foul on Kelly Oubre, Jr.  Anthony hit two free-throws with 32 seconds left to cut the lead down to one point.  Beal drew the foul on the next play and hit a couple of free-throws as well, giving Washington a three-point lead with eight seconds.

New York put the ball in their all-star hands for the final shot.  With Oubre guarding him, Anthony took a three for the tie but missed it off the back rim.  Wall grabbed the rebound to give Washington a three-point win.

The Wizards backcourt combined for 49 and nine assists.  The Wizards bench had 29 points between four players.  Mahinmi led the way with 13 points, five rebounds and two blocks. Anthony led his team with 23 points and Justin Holiday added 16 off the bench.

Last time these two teams met in D.C., the heat won by three despite Wall and Beal combining for 68.  The Heat may be without one of their key players in Dion Waiters.  Goran Dargic and Hassan Whiteside have been the Wizards killers the past two games.  Whiteside kills the boards while Dragic is the scorer and floor operator.  These two are the reason Washington can not beat the Heat this season.

With the new pieces to the bench and the Wizards playing good ball again, they have a much better chance of winning.  Washington is tied with the Toronto Raptors for 3rd place while the Heat are half a game out of the playoffs.  Both teams need this win for different reasons so it will be a hard-fought battle throughout.  Washington has to play better defense against them and has to play better second half ball.  If they do this, the outcome should be different this time around.