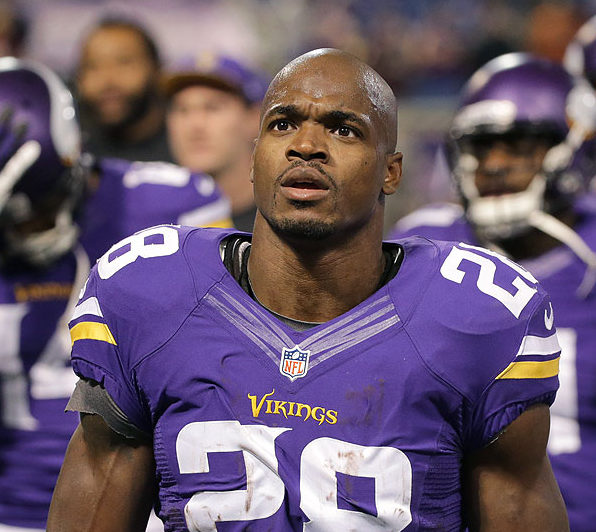 The Minnesota Vikings and the internal conflict with reconstructing running back Adrian Peterson’s contract have taken an interesting turn. As of right now, the Vikings have not conversed with Peterson about making a new deal yet. There is speculation that the Dallas Cowboys are interested in Peterson if the Vikings release him before March 9th.

If the Vikings do not make a decision before the deadline, they will have to pay Peterson $18 million for him to play next season. According to inside sources, General Manager Rick Spielman has not spoken with Peterson or his representatives yet but had this to say about Peterson.

“Adrian Peterson has a significant contract coming up. We have to make a decision,” Spielman said. “I’m not going to announce anything, but that will get addressed here before free agency starts. The one thing I will say is, if we don’t exercise that option, we will always keep the door open on all of our players. But in my mind, regardless if Adrian is here or not here next year — because of whatever happens — he will always be a Minnesota Viking. If he’s fortunate enough to go in the Hall of Fame, and fortunate enough to go in the Ring of Honor. In my mind, he’s a Minnesota Viking.”

Peterson is coming off a leg injury that kept him sidelined for a couple of months last season. He came back in December, played a couple of games, but did not have the burst and speed that he usually displays. He had only 37 carries for 72 yards and no touchdowns.

If the Vikings decided to part ways with Peterson, they have backup running back Matt Asiata. Even though Asiata had a tough year with having 121 attempts with only 402 yards, he has the potential to add some offense to a team that has the right pieces in play to make a successful run next season.

“I know where Peterson is at today. No one knows where he’s going to be three months from now,” said Spielman. “You just have to react, and how he’s reacting to his rehab, he’s pushing it as hard as he can, and when it happens, it happens. But I don’t have any concern that he’s going to do everything that he possibly can to get back as quickly as he can.”