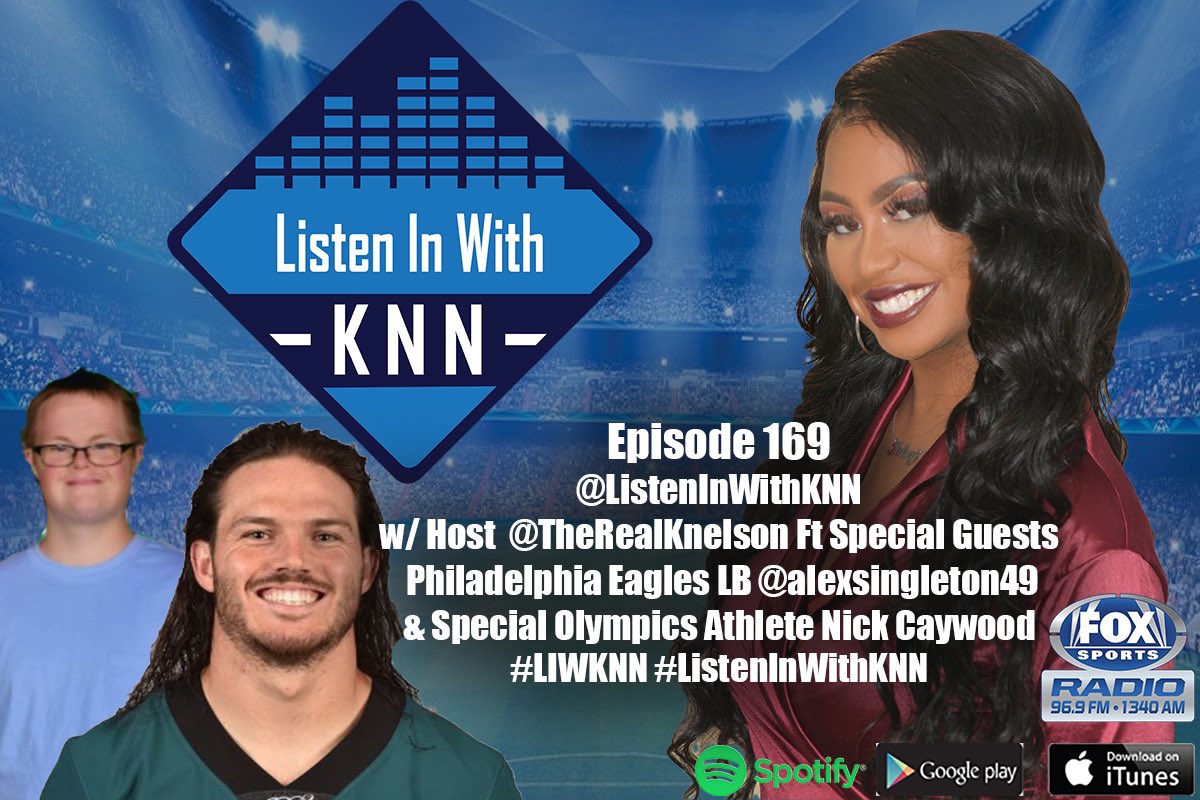 On the 169th episode of Listen In With KNN on Fox Sports 1340AM, host Kelsey Nicole Nelson welcomed Philadelphia Eagles linebacker Alex Singleton and Special Olympics Pennsylvania athlete Nick Caywood to the show.

Singleton started off his football journey as an undrafted free agent when he signed with the Seattle Seahawks in 2015 but was released at the end of training camp. Then, he took his talents to the Canadian Football League where he learned how to be a professional.

“When I was in Seattle, I was a young guy trying to learn everything as fast as you can and it was a lot. I had to go to Canada to become a pro and how to play the game the right way. It was awesome to be able to learn those experiences there for the three years and be able to come down here and play the way that I always knew I could play,” Singleton said.

When he came back to the NFL in 2019, the linebacker signed with the Philadelphia Eagles. Singleton had a breakout year this past season as he became a starter in Week Six and had a career high 120 tackles. Off the field, he and his sister Ashley filmed their workout sessions for all levels of athletes, including Special Olympians.

“Last summer with COVID and all the sports being canceled, a lot of athletes didn’t have anywhere to turn to work out. So I was asked with a bunch of other ambassadors to be able to lead these online workouts. Me and my sister decided that we really enjoy doing those in the times we got to film them. We do twice a week for the whole offseason that I’m home,” he said.

One of the athletes that took part in Singleton’s virtual workouts is Nick Caywood. He has been with Special Olympics since he was 11 years old as he’s played basketball, soccer, track and flag football.

“I love being a part of a team and I could see my friends. “I do the Teflon and it’s an exercise for agility, strength and endurance. I also did Alex Singleton’s workout,” Caywood said.

This season, Singleton helped to raise over 11,000 dollars through his Pledge It Campaign to help tackle inclusion as fans were pledging money for every tackle he made this season. He and his sister have been a part of Special Olympics throughout his 27 years of life and believes that everyone is included.

“Their entire thing is to include everybody and that’s the best thing in the world. It’s kind of like how I do our workouts as Special Olympics is the same thing with every single level of ability from someone who can hardly walk to one of the fastest sprinters on the planet. You can find all of that in Special Olympics competing on the same day on the same track and pool. That’s what I think makes it so special and also supporting each other, which is what almost more of that inclusion is,” Singleton said. “It’s not just having more participants but also seeing them supporting and cheering each other on and that’s what is really the most special part of about Special Olympics.”

Meanwhile, Caywood has dreams of working for the Eagles and had an opportunity to meet with some of Singleton’s teammates. Currently, he is helping the Eagles work on their picks for the 2021 NFL Draft.

“I’m on my computer researching and getting ready for next year. You should keep your eye on two players: Ja’Marr Chase and Dylan Moses,” said Caywood.

Throughout Singleton’s experience with Special Olympics, the biggest lesson that he has learned is the importance of doing what you love to do.

“It’s truly the best thing in the world and I think that has been what I’ve been able to carry over into football and life. I enjoy everything a little more because of that and I think athletes all the time makes you feel better, happy and love the game again. Those are the things that I’ve always carried with me and used to fuel my fire.”