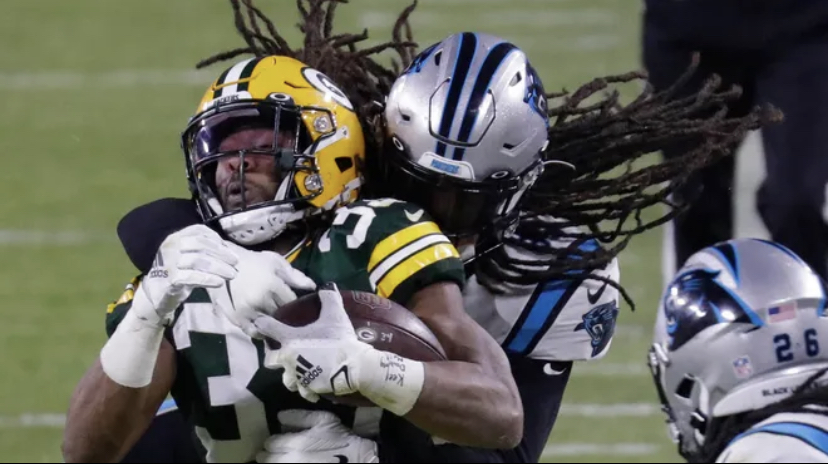 Coming off another one-score loss, the Carolina Panthers traveled to Green Bay to take on the 10-3 Packers.  The Packers went into the game with their sights set on the No. 1 seed in the NFC but if this season is any indication; there’s no such thing as a guaranteed win.

From the beginning of the game, the first half was all Green Bay with the Packers scoring on their first three possessions and went into halftime with a 21-3 lead.  Aaron Rodgers only had 99 passing yards in the first half but it was more than enough.  Rodgers completed a 1 yard touchdown pass to tight end Robert Tonyan and rushed for a score himself.  Running back Aaron Jones rounded out the scoring for Green Bay in the first half.  The closest the Panthers got to pay dirt was first and goal from the 1-yard line where quarterback Teddy Bridgewater lost the ball as he tried to reach it over the goal line.  Packer cornerback Kevin King scooped up the loose ball and returned it 48 yards.  It was Carolina’s fourth turnover in the red zone this season.  The Panthers’ only points in the half came courtesy of a 36 yard field goal by Joey Slye.

The second half saw a motivated Carolina defense who forced 5 straight punts before Packers kicker Mason Crosby booted a 51 yard field goal in the fourth quarter.  The Panthers chipped away at the lead with a 13 yard rushing touchdown by Bridgewater and two field goals from Joey Slye.  A would-be touchdown was negated by a holding call against guard Jon Miller early in the fourth quarter.  Still, the Panthers were able to stay within striking distance thanks to continued pressure on Rodgers; he was sacked 5 times as the defense held the Packers to 49 net yards in the second half after giving up 242 in the first two quarters.

Down 8 with 55 seconds remaining, everything that could go wrong for the Panthers, did.  A holding penalty during the punt return put the Panthers at their own 20 to start the drive.  Bridgewater was also flagged for intentional grounding resulting in a loss of down and 10-second runoff.  That left the Panthers with 37 seconds to go 90 yards; they simply ran out of time and head back to Charlotte with yet another one-score loss.  Receivers DJ Moore and Robby Anderson both surpassed 1,000 yards on the season and Green Bay’s Rodgers has his 3rd career season with 40 or more passing touchdowns. Packers running back Aaron Jones finished with 145 rushing yards – 114 in the first half – and one touchdown.

Green Bay moves to 11-3 while Carolina drops to 4-10.  The Panthers will face the Washington Football Team, and former head coach Ron Rivera, next week at FedEx Field.