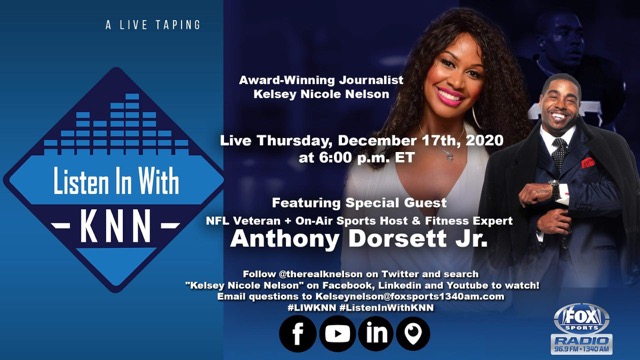 On the latest episode of Listen In With KNN on Fox Sports 1340AM, host Kelsey Nicole Nelson welcomed former NFL player, On-Air Sports host and Fitness expert Anthony Dorsett Jr. to the show.

The son of NFL legend Tony Dorsett was born and raised in Aliquippa, Pennsylvania which also produced NFL Hall of Famers Mike Ditka, Curtis Martin and his cousin Ty Law. So football became a natural progression for him.

“Just being in the western Pennsylvania, Ohio and West Virginia area, there’s a lot of football that comes out of there. I grew up on the University of Pitt campus and I was in the locker room and been around it my whole life. Aliquippa, Pennsylvania produces some of the best athletes out of one of the smallest towns in the United States,” Dorsett Jr. said.

The ex-defensive back said that his father was a big influence in his life and once told him that small things make big things happen.

“You can take that into your personal life or professional life and that’s been one of the most important lessons that I got from him. Throughout the years, there’s always been moments and times where a certain word is dropped on you at the right and precise moment,” he said. “It’s been great to have someone with his knowledge and experience in my corner,” he said.

He attended the University of Pittsburgh to play football and graduated with a degree in communications. Although Dorsett knew that his dad was a football player, he didn’t understand his impact until he got to Pitt.

“I knew anywhere I went to school, there was going to be some pressure because of my dad. Growing up, I watched him play and being a part of that from his first college game all the way through his NFL career. I just got caught up with being with my dad and you understand he’s the football player and everybody loves it,” he said.

“I watched the Draft the whole day and you go through a range of emotions. When I actually was drafted, I think I was doing something in the yard and my cousin Ty Law called me. He rang the phone before the Oilers called and was like, ‘yo, they just called your name.’ I was in Dallas when the Draft was on and we celebrated together,” he said.

During his first four seasons in the league, Dorsett Jr. witnessed the Oilers move to Tennessee and became the Titans. In 1999, they defeated their division rival Jacksonville Jaguars three times, including the AFC Championship Game that got them to the Super Bowl where they lost to the St. Louis Rams.

“I do remember Coach Jeff Fisher told us before we left for Jacksonville to pack our bags for the Super Bowl. Unfortunately, we didn’t win that game but it was one of the better Super Bowl games that people have seen up until that point. We never thought in a million years that they were going in there and run up and down the field on us and putting up a gang of points,” Dorsett Jr. said. “One of the things about that Titans team was we were scrappy.”

He left the Titans in 2000 to sign with the Oakland Raiders, who were an up-and-coming Super Bowl contender. They went to the Super Bowl in 20002 where they lost to the Tampa Bay Buccaneers. Even though Dorsett Jr. could’ve had two Super Bowl rings, he remembers the relationships and friends he made.