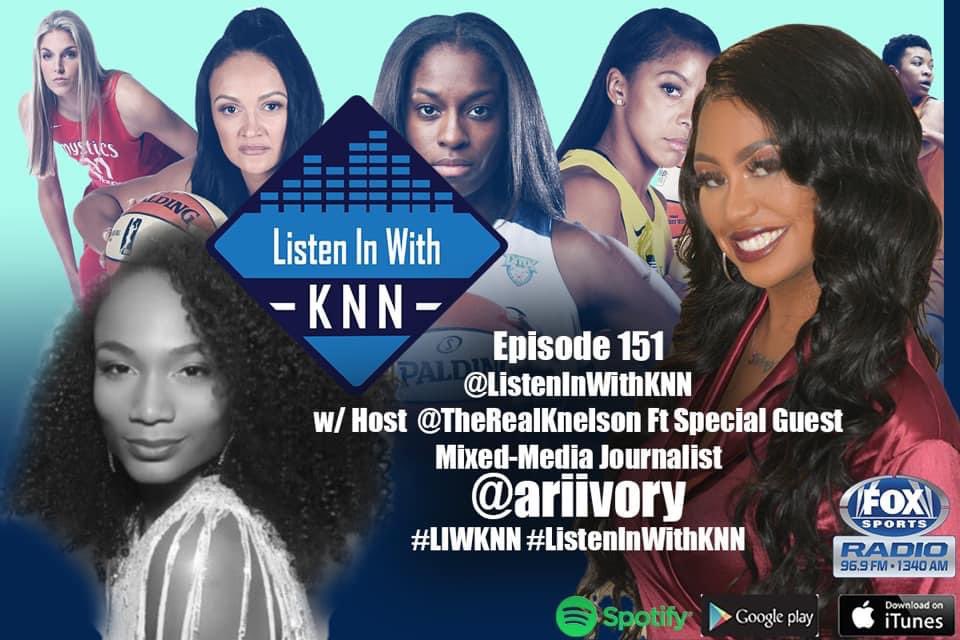 On the 151st episode of Listen In With KNN on Fox Sports 1340AM, host Kelsey Nicole Nelson welcomed mixed-media journalist, model and social media producer at Bleacher Report Arielle Chambers to the show.

Additionally, she’s a model for Model Management Group, Foot Locker and the Jordan Brand. Chambers is grateful to have built relationships so she can be strategic about the job she chooses for modeling.

“A lot of clients realized that there’s a voice behind that and the face behind the body. We’re just now coming to a place in society where we’re allowing models to have opinions and be influential. I feel the need to inform them that women cannot only rock the runway but they can dribble down the court,” she said.

The North Carolina native has lived her life with gratitude and doesn’t want to be in a position where she’s the only Black woman in the room.

“That’s why I go so hard for us because not everybody needs to go through that. If somebody is down there breaking down barriers, then it should set you up to be able to navigate that space better. LaChina Robinson, Cari Champion, and Jemele Hill did it for me so why can’t I do it for the next generation,” Chambers said. “That’s what set me up for the right path.”

She has her own show on Bleacher Report called Highlight Her that’s about women in sports and cultural realm with an emphasis on community.

“I want it to feel like you’re with your girls in a group chat. The whole point is to get people excited about women in a place where we’ve been undervalued and underrepresented. Bringing that attention to the general public is necessary and we’re one of a few,” Chambers said.

One of the biggest attention brought to the public is social justice, which has been a big movement in men’s and women’s sports. Chambers admires the athletes for playing during a global pandemic while using their platforms for social change.

“They play for an America that doesn’t even view them as human and can’t come to a general consensus that their lives matter. Some of them had their children in the Bubble and you have to explain to your child why this is happening? While you’re having these discussions, you’re fearing for your child and husband or wife and then you have to play a game for an audience that tells you to shut up and dribble,” she said. “Salute to the players.”

One of her favorite players was the late great Kobe Bryant and was excited to see the Los Angeles Lakers win their 17th championship to honor his memory.

“I love L.A. basketball because I’m Sparks fan and the purple and gold reigning supreme is really cool. Seeing LeBron (James) still bask his greatness is incredibly dope especially doing so much in the community. The fact that LeBron won his fourth title in 17 seasons is the same thing that Sue Bird (of the WNBA’s Seattle Storm) did. I was pulling for the Lakers just because of Kobe’s legacy and having that full circle moment.”