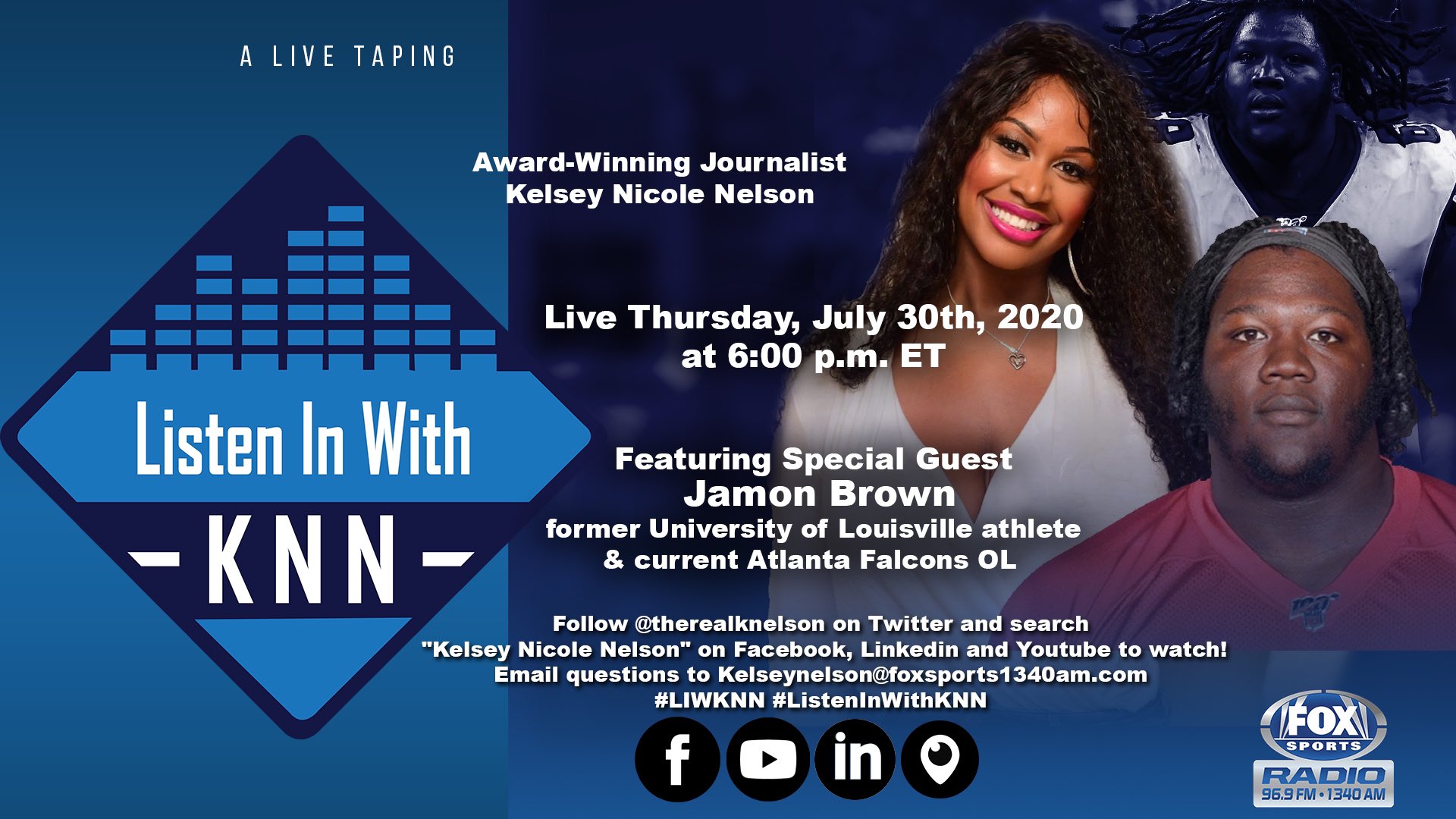 On the latest episode of Listen In With KNN on Fox Sports 1340AM, host Kelsey Nicole Nelson welcomed Atlanta Falcons offensive lineman Jamon Brown to the show.

Speaking on his journey, he was born and raised in Louisville, Kentucky where there aren’t any pro sports teams. Brown started playing football when he was seven years old and grew up supporting the Louisville Cardinals college football team. Eventually, his love of the team led him to play for the University for four years while earning a Bachelor’s degree in Criminal Justice.

“I played under Coach (Charlie) Strong and we were Sugar Bowl champions in 2013 when we beat the Florida Gators. Being a hometown kid, that always feels good to hear your school being a powerhouse in football. Makes me want to smile from ear to ear,” Brown said.

He was one of 11 Louisville players in the 2015 NFL Draft when he was selected in the third round by the St. Louis (now Los Angeles) Rams. For the six foot four, 340 pounder, that moment felt like it was a long time ago.

“Getting that phone call and my dream becoming reality is breathtaking. I knew that what people may say is impossible can be possible as long as you wholeheartedly believe in it,” he said. “I made it my goal to make sure somebody else experiences that same thing.”

Brown was with the team when they moved from St. Louis to Los Angeles in 2016 and was featured on Hard Knocks. The Rams had some rough years as they went 13 straight seasons without making the playoffs. However, that soon would change with the arrival of head coach Sean McVay.

“When he ended up becoming the head coach, we got things turned around. Experiencing that (2017) season by making it to the playoffs for the first time since 2004. Being part of that turnaround was awesome,” he said.

After a short stint with the New York Giants, Brown became the first millionaire in his family when he signed a three year, 18.75 million dollar contract with the Atlanta Falcons in 2019. It was one of the greatest moments of his career.

“I see the money as a tool to ensure security for my family. Being able to show my daughter that if she believes in herself and works hard enough, it’s attainable. That’s been the best feeling for me and make sure I do whatever I can to help my community and others,” said Brown.

With his salary, his main objective is to be more educated in the financial realm and to have a financial team to make sure that he’s saving and investing his money to ensure generational wealth.

As a result, he started the Jamon Brown Foundation in Louisville during his second year in the league. The mission is to impact the lives of people who struggle with poverty, violence, youth, and homelessness.

“We educate those areas like financial literacy and healthy lifestyles. Getting the community to help itself because, at the end of the day, the people that we need to change our community live in the community.”