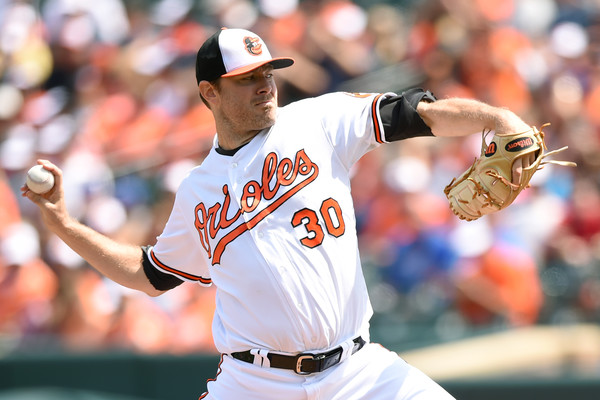 The Baltimore Orioles will re-sign starting pitcher Chris Tillman to a one-year/$3 million deal, per Jon Heyman of FanRag Sports.

Chris Tillman is returning to orioles. Deal agreed to.

SARASOTA — Tillman, 29, can still receive up to $7 million in incentives, according to reports. It was reported that the Detroit Tigers, Kansas City Royals and Minnesota Twins had interest in Tillman. The Tigers watched Tillman throw yesterday. The Twins acquired Jake Odorizzi from the Tampa Bay Rays on Saturday, so their interest waned in Tillman.

He was acquired by the club in a deal with the Seattle Mariners for starting pitcher Erik Bedard. The deal also included fellow All-Star center fielder Adam Jones and former Orioles closer George Sherrill. Tillman is an nine-year veteran of the Orioles, first pitching with the team in 2009 and spending his entire Major League career with the team.

On a one-year deal, Baltimore will be able to bring back a starter who has had some success in the past. If Tillman can stay healthy and return to some semblance of his 2016 season, he will be a welcome addition to the club.

Baltimore also signed starting pitcher Andrew Cashner last week, after not having any proven starting options outside of Dylan Bundy and Kevin Gausman. It can be assumed that Tillman will be competing for a role at the back end of the rotation, either as the number four or five starter. Miguel Castro, Nestor Cortes, Jose Mesa Jr., Mike Wright and Gabriel Ynoa will all join him in the battle for the final two spots.

Though the Orioles have now signed Cashner and Tillman, one shouldn’t expect them to be done in their search for starting pitching. Baltimore has only committed $11 million this season in signing free agent pitchers. The team still could greatly improve in the rotation and there are other available free agent starters like Alex Cobb and Lance Lynn out there, as well as Collin McHugh being available in a trade, so it wouldn’t come as a surprise if Baltimore wasn’t done with adding to their rotation.

Alex Presley is a 32-year old left-handed hitting outfielder and the Baltimore Orioles just signed him to a minor league deal.