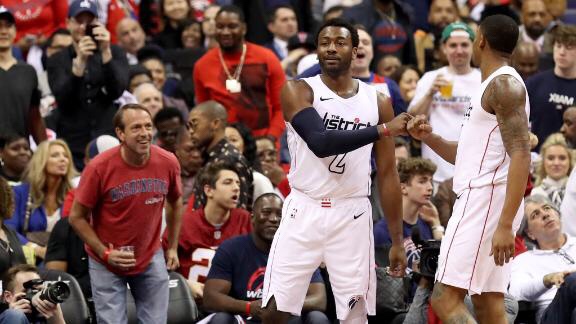 WASHINGTON- The Washington Wizards led by Bradley Beal and John Wall in the final stretch, protected their house and tied the series with the Toronto Raptors in a 106-98 victory.

Despite the final score, things didn’t look promising for the Wizards who came out lackluster in the first half shooting 34% from the field and 14% from beyond the arc.

However, the Wizards turned up their playoff magic and shot 65% from the field and 83% from beyond the arc in the third quarter. That movement was led by Bradley Beal who had 12 of his 37 points in that quarter and Otto Porter who scored 10 of his 11 points.

Going down the stretch during multiple lead changes, Beal was fouled out with just under five minutes remaining in regulation. Markieff Morris, Kelly Oubre Jr., and John Wall stepped up in Beal’s absence and finished off the game to head into Toronto on Wednesday with the series tied.

When Coach Brooks spoke on the last five minutes of the game without Bradley, he said, “You have to have resolve to win in this league. We’ve had some tough moments this year with John [Wall] missing half the season, but we found it and it put us in a position to make the playoffs through resolve. You win playoff games and you win playoff series with having that.”

Beal verbalized his frustration over the fifth foul and thought he was going to get kicked out of the game for his antics, “When they initially called me for my sixth I was beyond emotional, beyond mad, frustrated. Pretty much any synonym you could add on that list. I honestly thought they were going to kick me out of the game I was so mad, but I was happy they didn’t do that. I just gathered my emotions, gathered my thoughts and told my team we were going to win, regardless. I knew if we still had John [Wall] in the game I loved our chances.”

Wall certainly stepped up in the absence of Beal who finished the game with 27 points and 14 assists, scoring 10 of Washington’s last 14 points to close out the game. When speaking on his leadership he said, “Just go in attack mode. Even when Brad’s [Beal] in the game, he’s telling me ‘be aggressive.’ At the same time, I’m trying to find him, I’m trying to keep him going and play my game. That’s get my teammates involved and make the job easier for those guys. They are knocking down shots and cutting for me and I going to bet my opportunities to score the ball. When Brad went out, I knew I had to do whatever it took: guarding DeMar DeRozan, making plays, scoring the ball and passing the ball.  I just wanted to do whatever, so that we could advance to Game 5, tied 2-2.”

Washington certainly made the right adjustments in the third quarter to give them that push late in the fourth quarter. Game 5 will take place in Toronto where the Wizards will hope to take a 3-2 lead and finish matters off at home on Friday.