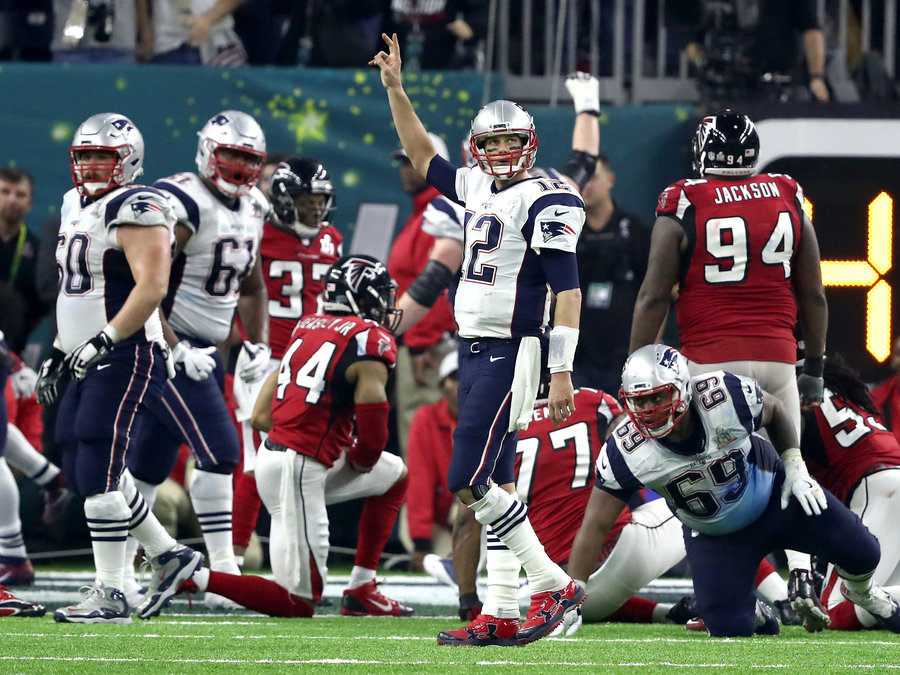 If there was ever a game that defined why football is a game of two halves, it was Super Bowl LI.

Down 21-3 at halftime, the New England Patriots used overtime to cap off the largest comeback in Super Bowl history by beating the Atlanta Falcons 34-28.

Things started off incredibly well for the Atlanta Falcons. A 21-point second quarter by Atlanta included a 5-yard touchdown run by running back Devonta Freeman, a 19-yard touchdown catch by tight end Austin Hooper and an 82-yard pick-6 by corner Robert Alford. New England finally scored their first points late in the second quarter. By then, the score was 21-3 and momentum was largely on the sidelines of the Falcons.

A 6-yard touchdown catch by running back Tevin Coleman gave Atlanta a 28-3 lead early in the third. Things truly looked up for the NFC Champions with a 25-point lead.

Patriots quarterback Tom Brady may have had the prettiest, ugly game of his career. Brady was sacked five times, hit three times that amount, and seemed to be rattled early and often. Yet somehow, the man they call Tom Terrific, suddenly looked, terrific.

Brady ended with game with 62 passing attempts and a Super Bowl-record 466 yards. The Patriots offense as a whole totaled 546 yards and possessed the ball for 40:31 of game time.

.A 19-point fourth quarter by the Patriots not only turned the tables entirely in New England’s favor. It also may have cemented Brady’s legacy as arguably the greatest quarterback of all-time. A 10-play, 91-yard drive with roughly three minutes remaining in the game helped tie up the game at 28. Thanks mainly to a 1-yard touchdown run by Patriots running back James White and a two-point conversion by receiver Danny Amendola. On that very drive, receiver Julian Edelman made a spectacular catch that may go down in history as one of the best in Super Bowl history. His 23-yard reception while corralling it between three defenders and maintaining a bobble got the Patriots in Falcons territory.

Regular season MVP Matt Ryan could not find his groove for Atlanta late in the second half. The veteran quarterback passed for 284 yards and two touchdowns with a 144.1 QB rating. The league’s top scoring offense posted 344 total yards on only 46 plays. Falcons receiver Julio Jones had 87 yards on four receptions. Falcons running back Devonta Freeman posted 121 total yards and a score.

The first Super Bowl to reach overtime only needed eight plays and 75 yards. Brady guided the Patriots down the field and capped it off with a walk-off 2-yard run by White to give the Patriots their fifth Super Bowl victory in team history. Brady’s Super Bowl MVP was the fourth of his career.