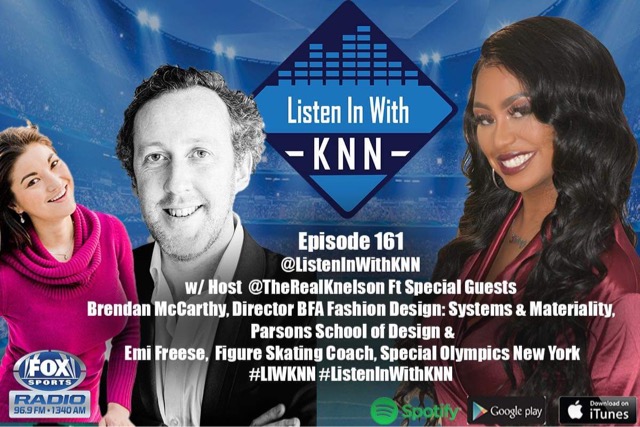 On the 161st episode of Listen In With KNN on Fox Sports 1340AM, host Kelsey Nicole Nelson welcomed Brendan McCarthy, who is the Director of BFA Design: Systems and Materiality, Parsons School of Design and Emi Freese, a figure skating coach with Special Olympics New York to the show.

Recently, Special Olympics partnered with Parsons School of Design to teach courses in design that would be used at global sporting sports. Parsons met with a Special Olympics team in Turkey and that’s where Special Olympics had this revolutionary idea to bring sport, fashion and design education together to create new possibilities.

“We established this partnership that led into this incredible class. The students worked with incredible coaches like Emi Freese one-on-one in a collaborative model to reimagine not great garments but imaging new futures,” McCarthy said. “That’s how it started and Emi was one of the most amazing people I ever met in my life.”

Freeze has been involved with Special Olympics New York for over five years as a figure skating coach. At first, the former figure skating star didn’t know what she was getting into until they started executing the project. However, the experience of working with Parsons School of Design was eye-opening for her and Special Olympics.

“I feel like through this whole process, everyone learns something. Through the students, athletes, professors, Brendan McCarthy and his entire team behind this, I really learned that it does take a certain type of person to work with these athletes. At the same time, anyone can learn how to do it and we learned that in a semester and it was incredible,” Freese said. “After my first week, I thought we had something big and really good here.”

Parsons will host a class every year as its partnership with Special Olympics have strengthened because of their missions around transformative possibilities with sports and fashion. It has been an incredible experience for the students working with the champions at Special Olympics and reimagining co-design possibilities for fashion in which opened up territories.

“I’m really proud to say that the leadership and the incredible work that Special Olympics and those athletes put into that class clearly had an impact because it was the first course to fully register and have a full waitlist for it. It goes to the possibilities that Special Olympics bring around what a catalyst for change truly can be,” said McCarthy. “Parsons is committed equally there.”

Like any discipline, fashion has faced some different challenges with a lot of their students coming from many different backgrounds. But Parsons’ goal is to look at how they can engage these communities, especially the most marginalized ones.

“What we’ve thought at Parsons is that I start with three basic questions: who do you love?, what communities do you care most about and what are the critical issues facing the people you love and the communities you care about? We are also transforming it aesthetically to match their dreams, hopes and what they envision in terms of self-confidence, beauty and everything that goes along with it,” McCarthy said.

His hope is that it can actually spread to different levels of education like at the university level.

“I definitely see these co-creative models that Special Olympics and Parsons are carving the path for supporting students at much younger ages. It could really change how we think about these critical issues in a big way. Being a fashion designer and athlete is a totally transformative way to think about how you can get an education, be a problem solver and critical thinker,” he said.

Freese wants to see the program become the norm for everyone. “I want to see anyone with an intellectual disability not be marginalized in any way.”