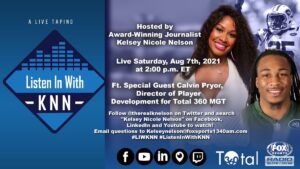 On one of the latest episodes of “Listen In With KNN” sports talk podcast/radio show presented by FOX Sports Radio 1340AM/96.9 FM, host Kelsey Nicole Nelson was joined by former NFL player and the current Director of Player Development at Total 360 Management, Calvin Pryor III.

Pryor is from a small town in Florida Port St. Joe. During the show, Pryor touched on how the town only has two stoplights. Though he started with humble beginnings a big change awaited him when he would later become the 18th pick in the 1st round of the 2014 NFL Draft by the New York Jets.

Going from the field to the front office, Pryor and Nelson first spoke about his new role at Total 360. Pryor has been friends with CEO & Founder, Desmond Davidson (who he refers to as Des), and told him “I don’t want to just be a client, I want to be at the table as well to help you brainstorm and come up with ideas…once I was done playing football, he had a position open up for me and I gratefully accepted the opportunity.”

Nelson kept the conversation going by asking him how he transitioned from once being on the field to now helping athletes in the office. “It’s been a slow transition kind of because I was one foot in, one foot out…so to have guys like Des who fully support me off the field and try to create ways to do something else out of football once you’re done playing, that’s been a great thing to have.”

Pryor shared that he will be going back to his former school, the University of Louisville, where he will finish his last year and become a communications graduate. Pryor spoke about his time in Louisville fondly, “I met some incredible people there, created some fantastic relationships, guys that I met in 2010, my first visit going to Louisville that I still talk with today. It was an unforgettable experience. It was one of those things that you wish you could stay in college longer.”

Devoted listener Mike Patton asked Pryor what his biggest adjustment in life was after football and he replied, “Being home with my kids all the time. With football, you go to work early in the morning and you don’t get home until probably late in the afternoon and spend a few hours with them until it’s time for them to go to bed.”

Another listener of the show, Jarrell Heslip, asked Pryor what he believes a gap is in player development when empowering players. Pryor answered, “Me being a former NFL player and on the collegiate level, the rights of do’s and don’t’s. Social media is a big thing nowadays.”

Pryor also spoke about the pros and cons that he found as a player as part of a management company. “The pros were creating working relationships with the guys, helping create a platform for guys to stand on, to build that brand that they want to build. I would say, you probably could do more in the community…all your time is tied up into school and football so you can’t do much in the community.”

Throwing it back to Pryor’s start, Nelson then asked Pryor how he got into the game of football. “My grandmother placed me in football at around the age of seven and I always had a love for it. I always loved the game. I watched my dad go out there and play college football…with him being my hero, I got a passion and love for it and became pretty good at it.”

Pryor was a multidimensional athlete back in high school being a center fielder in baseball, point guard in basketball, and a running back and safety in football. He admitted that he didn’t watch much pro football growing up and watched more basketball and football.

Nelson and Pryor also spoke about the rise of social media and how it can be hard for athletes who receive negative comments and messages. “You just gotta block it out, honestly. You can’t pay attention to it because it can mess with you mentally if you do try to pay attention to it,” said Pryor.

Nelson then asked Pryor for his thoughts on the players who are currently playing in NFL preseason games and the pressure that they must feel if they mess up. “Think about getting the next play. Because in football you know you’re not going to be perfect. You miss a tackle, you might drop a pass, or you might miss your interception. So just think about getting the next play and hopefully, things go your way.”

Towards the end of the show, Pryor touched on what Total 360 Management can mean to players. “Total 360 is a family brand management company. We’re trying to build a platform where guys can get paid for their likeness since we’re working with college athletes and then we have clients in the NFL so you can use your resources to branch out and have a partnership we these different brands,” said Pryor.