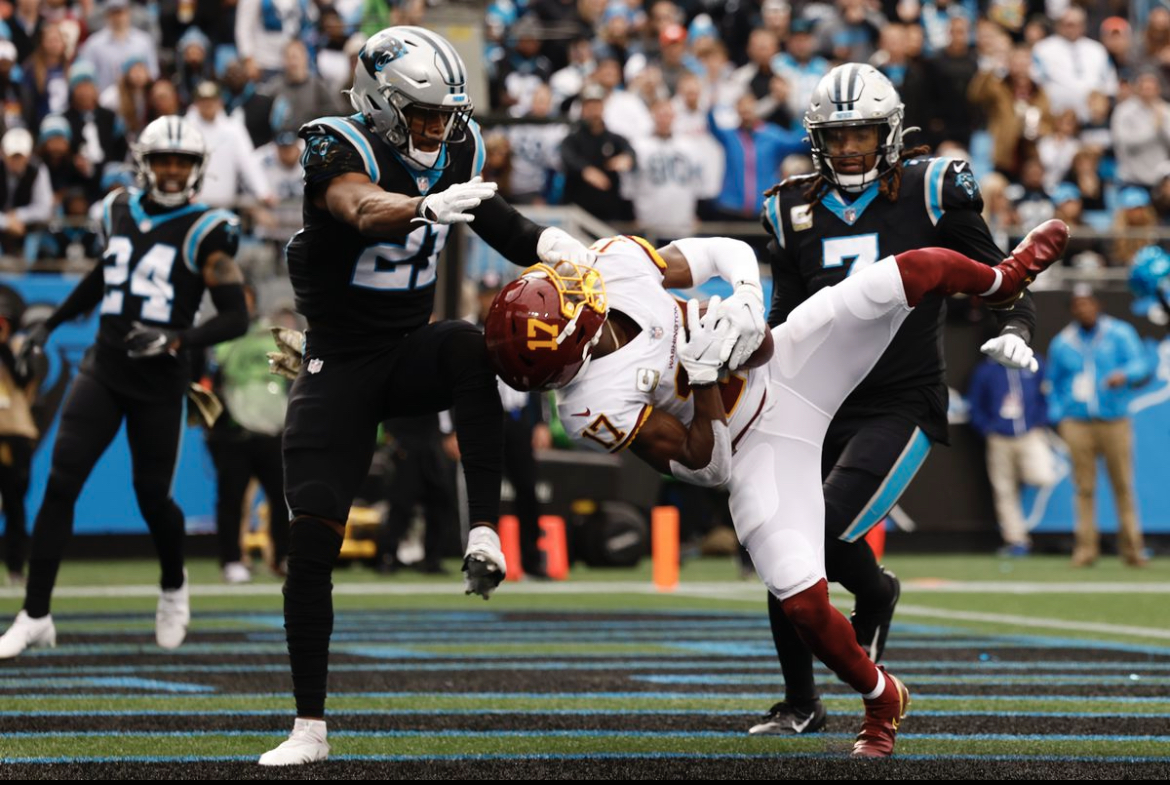 For the past week, the headline has been “Superman Returns to Bank of America.” But wait, there’s more – there was also the tidbit that former Carolina head coach Ron Rivera was returning to Charlotte for the first time since his firing in 2019. Cam Newton made it clear that there was a game to be played; regardless of personal relationships. There was no pre-game hug, at least as far as we could see.

The Panthers struck first, scoring on their first possession when Newton connected with DJ Moore on a 10 yard touchdown reception with 9:23 left in the first quarter. Two plays earlier, the Panthers went for it on fourth-and-1 and running back Christian McCaffrey rushed for 15 yards. A face mask penalty tacked on another 15 yards to give the Panthers the ball on Washington’s 20-yard line. Safety Juston Burris was flagged for the first of his two unnecessary roughness penalties to extend Washington’s drive on the next series. The Panthers were bailed out when linebacker Frankie Luvu recovered Antonio Gibson’s fumble on the Carolina 10-yard line. The Panthers punted on their next possession and a 39 yard reception by Washington receiver Terry McLaurin closed out the first quarter.

A few plays later, quarterback Taylor Heinicke finds Cam Sims for the 6-yard touchdown to tie the game with 13:29 in the first half. Another face mask penalty on Washington put the ball on the 24-yard line and Newton was in for the touchdown on the very next play to put the Panthers ahead 14-7 with 5:52 to play in the second quarter. xx   DeAndre Carter fumbled the kickoff return, but Washington was lucky enough to recover at their own 29. They went on to tie the game at 14 right before the half when Heinicke connected with McLaurin on a 12-yard touchdown reception. At the half, Newton was 9-of-11 for 78 yards, one touchdown, and a 126.5 rating. Heinicke, who also spent time in Carolina was 9-of-12 for 133 yards, two touchdowns, and a rating of 150.3.

Coming out of halftime, Washington went down and scored on their first drive when Heinicke hooked up with Carter for the 4-yd touchdown for their first lead of the game with 9:21 to play in the third quarter. Looking to get something going, Carolina looked to a throwback play that resulted in a 16-yard gain to the Washington 27 yard line. On the next play, Newton hit McCaffrey over the middle for the touchdown to tie the game at 21 with 10:44 left in the fourth quarter. Burris was flagged for his second unnecessary roughness penalty, two plays into Washington’s next drive, when he hit a sliding Heinicke. The penalty put the ball at midfield and eventually, the WFT capped the drive with a 46 yd field goal by former Panthers kicker Joey Slye. The score was 24-21 with 4:13 left to play.

Facing fourth & 3 from their own 32, there appeared to be some confusion on whether the Panthers would go for it or punt. They ended up burning a timeout to avoid delay of game and McCaffrey was stopped half a yard short of the first down, turning the ball over on downs. Already in Carolina territory, Washington kicked another field goal to extend the lead 27-21 with 1:50 left to play. The door was still slightly ajar but the Panthers could not get closer than the Washington 49 before Newton was sacked, ending their chance of a victorious homecoming for QB1.

Newton finished 21-of-27 for 189 yard, two passing touchdowns, one rushing touchdown, and a 120.5 rating while Heinicke finished 16-of-22 for 206 yards, three touchdowns, and a 141.3 rating. McLaurin was clutch for the WFT hauling in five catches for 103 yards and a touchdown while McCaffrey led a balanced receiving core for Carolina with seven catches for 60 yards. He finished with 119 scrimmage yards. One glaring statistic is the 46% third down efficiency percentage Washington was able to convert on the #2 ranked defense. In their worst defensive outing since the Week 4 loss to the Dallas Cowboys, the Panthers gave up 190 yards on the ground with Gibson leading the Washington running attack with 95 yards on nineteen carries.

Rivera’s successful homecoming comes on the heels of last week’s win over the defending Super Bowl champion Tampa Bay Buccaneers.  The WFT heads into their Monday Night Football matchup against the Seattle Seahawks with a 4-6 record while the Panthers will try to get back to .500 when they travel to Miami to take on the Dolphins ahead of their bye week.