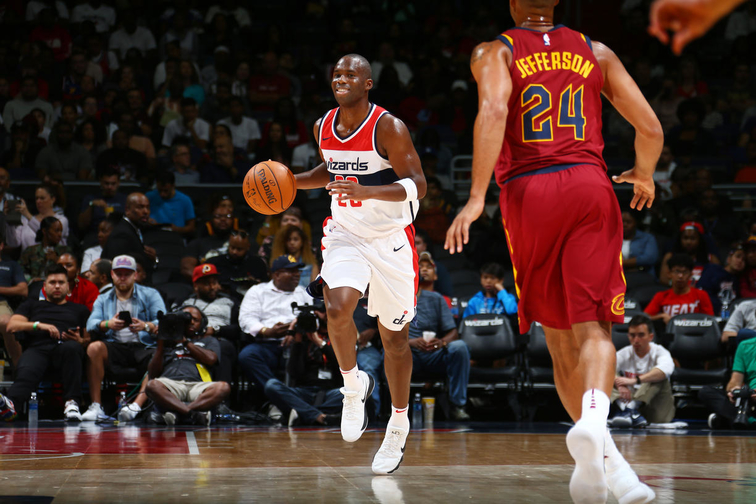 On Sunday afternoon, the Wizards hosted the Cleveland Cavaliers in the last exhibition home game before the season opener Oct 18th vs Philadelphia. Cleveland came to D.C. but rested half of the roster. That meant no Kevin Love, J.R. Smith, Tristan Thompson, Derrick Rose, Dwyane Wade and Jae Crowder. Lebron James missed his 3rd preseason game with an ankle injury.

“LeBron will be able to play the last two games and none of the guys have played with LeBron yet, so that will try to give the guys a chance to try and find a rhythm going into the season,” Cleveland coach Tyronn Lue said. “Kind of a different way than I wanted to do it, but didn’t expect LeBron to get hurt in training camp. This way they can miss this game and come back and play the last two and try to get in a little rhythm with Bron.”

Meanwhile, Coach Brooks didn’t need too much from the starters. Wall played less than eight minutes, finishing with six points and two assists. Beal, who led the Wizards’ starters with 11 points, finished his night after nine minutes 20 seconds of work.

“I guess they didn’t wanna show us all their cards.” said Bradley Beal in reference to Cleveland sitting half of their roster.

Through less than six minutes of the first quarter, the Wizards experimented with a smaller starting lineup. Kelly Oubre Jr. moved to the unit to play small forward while Otto Porter played stretch four.

Unfortunately, the test was brief as Oubre picked up three fouls in only 5:39, but in theory, the small lineup can switch defensively and score effortlessly.

“It’s definitely a tough lineup to stop,” Brooks said. “It’s a lot of offensive force. It’s a lot of players who can move the scoreboard.”

“It was cool. We were able to switch a lot on defense,” Beal said of the smaller starting lineup. “Our talking still has to be a little bit better, but as far as our spacing, the floor is very spaced and we have multiple shooters on the floor. I think it gives us a different dynamic that a lot of teams aren’t very used to seeing from us. We are usually a two big team and that will definitely give us a different look. I’m curious to see what Coach (Brooks) wants to do with it.”

When Sheldon Mac went down, the entire team surrounded him praying for one of the team’s most-loved teammates. Brooks said that Mac will get an MRI Sunday night or Monday morning to determine the extent of his injury. It certainly didn’t look good.

“It’s super tough. He’s a brother,” Oubre said of Mac. “Our hearts dropped when he went down on the floor. I said a prayer for him when he was on the floor and I was standing over him. All we can do is just pray that he has a speedy recovery and continue to support him no matter what.”

Will Felix make the roster:

Depending on how Mac’s injury looks, might open the door for Carrick Felix.  Felix, who was invited to training camp, played the entire second half for an efficient line scoring 13 points on 4-for-6 shooting. He could become a bench wing option if Mac’s injury holds him out awhile.

The Wizards will head to Miami for Wednesday’s tilt with the Heat.