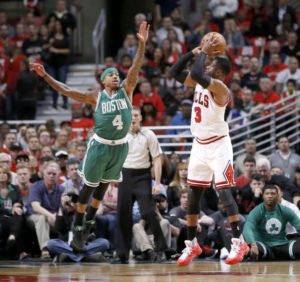 The Boston Celtics have finally did something that no team has yet managed to do in this series…and that is win a game at home. After 5 games the Celtics are the first team to win a home game in this best of seven series as they defeated the Chicago Bulls 108-97 Wednesday night at the TD Garden.

Isaiah Thomas and Avery Bradley scored 24 points apiece to help lift the Boston Celtics past the Chicago Bulls as Boston is now just one game away from winning a series that they were down 0-2 in less than a week ago. Bradley was the X-factor for the Celtics tonight as 17 of his 24 points came in the first half. Both teams were well rested as they have not played since Sunday.

The game was tied at 84 a piece but with just under 5 minutes to go in the fourth quarter Dwyane Wade and Robin Lopez were each called for technical fouls 32 seconds apart. This was a key moment as this changed the momentum of the game as the Celtics went to go on a 20-5 run that gave them a 104-89 lead which they never gave up.

Fred Hoiberg who had some remarks about Isaiah Thomas after their last loss against the Celtics said that Isaiah Thomas is impossible to guard when he carries the ball. When asked did Isaiah Thomas carry this game, Hoiberg shouted “No”.

Dwyane Wade had 26 points, 11 rebounds and eight assists for Chicago but it was not enough as the Bulls ultimately came out with the loss. If the Bulls hope to make it back to Boston for a game seven Jimmy Butler will have to play a little bit better as he only managed to put up 14 points tonight.

Both teams will be back at it on Friday for game 6 @ the United Center.

The game will be televised on ESPN.