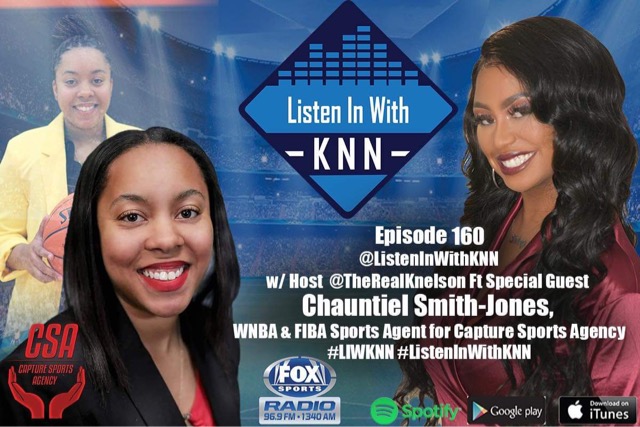 On the 160th episode of Listen In With KNN on Fox Sports 1340AM, host Kelsey Nicole Nelson welcomed WNBA and FIBA Sports Agent from Capture Sports Agency Chauntiel Smith-Jones to the show.

Speaking of her journey, she was born and raised in Fort Wayne, Indiana and started playing basketball at a young age. Smith-Jones would play in middle school and high school while running track at the same time. She had dreams of becoming a WNBA player but got a scholarship to run track at Indiana Tech and that’s where she found her true passion.

“I was running on the track team and thought I was going to be an Olympian. I realized the people I was running with were running like Zebras and I’m human and couldn’t keep up with that. After speaking to my sports management advisor at school, I realized I wanted to be in sports to help the people who look like me and athletes in general,” Smith-Jones said. “That’s what made me passionate about becoming a sports agent and making a difference in the industry.”

“I didn’t take the big agency route like a lot of people. That’s when God was talking to me and said I should bring the sports agency back to Fort Wayne, Indiana and give back to my community. When I heard this, I asked why and he said, ‘you’re qualified.’ From there, I started developing the agency and with a lot of different people and gained a lot of mentors over the past couple of years. I’m so thankful for them because I am where I am today,” she said.

“The sporting industry is so open but it’s not easy and they have to put in the work. We’re really big on helping our players become more than just athletes. We want them to be role models, entrepreneurs, business owners and owning a stake in a company. We want them to be able to have a life outside of that sport and that’s something we’re really passionate about as far as our services with Capture Sports,” said Smith-Jones.

Black women have faced challenges being in the sports agency business and Smith-Jones is no stranger to them.

“When we’re going after these athletes, you have to worry about how they, their girlfriends and wives perceive us. When we walk in the building, they automatically assume that we’re girlfriends or baby mamas and that’s not what we are. We are a sports agent and we deserve to be acknowledged as such,” she said.

Smith-Jones hopes that her presence as a sports agent will encourage more people like her to get into the business.

“If you are passionate about this, then you have to figure out what’s your why. The next thing is to be authentic for the most part. Secondly, stay open to knowledge because you don’t know. As long as you stay open minded about the industry, it will open the door for so many other different things.”