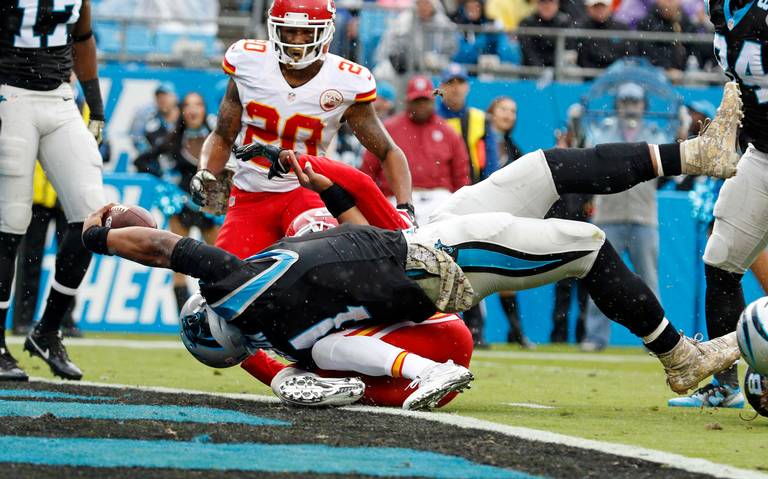 The game was knotted up at 17 when Benjamin caught a pass from Cam Newton, and Peters ripped the ball from his arms. Santos’ fourth field goal of the game went through the uprights, lifting the Chiefs (7-2) to their fifth straight victory.

Eric Berry returned a Newton interception 42 yards for a touchdown as Kansas City’s defense came up with big plays when needed. Alex Smith threw for 178 yards and Spencer Ware ran for 61 yards for the Chiefs, who failed to score an offensive touchdown.

A Chris Jones sacked Newton for a 12-yard loss on third-and-18 at the Kansas City 28, took the Panthers out of field goal range. Instead of making it a three-possession game, the Panthers were forced to punt.

The Chiefs kicked a field goal to make it 17-6 before Berry picked off a pass that Newton tossed into the air under pressure and returned it for the touchdown. Smith passed to Travis Kelce for the conversion, and Santos’ third field goal tied it at 17 with 4:25 left.

Berry displayed why he’s still one of the best safeties in the league with his first interception return for a touchdown since 2013 and the fourth of his career.

Newton established franchise records for pass completions and touchdowns rushing. Newton passed Jake Delhomme for the most completions in franchise history with 1,581 with a strike to Greg Olsen in the first quarter.

The Panthers had a 20-play drive in the third quarter that took more than 10 minutes off the clock but came away with no points. Newton took sacks on a second and third down, and the Panthers had to punt.
.
UP NEXT

Chiefs: Return home to host another NFC South team in the Tampa Bay next Sunday.

Panthers: The Panthers have a quick turnaround, hosting the New Orleans Saints on Thursday night.