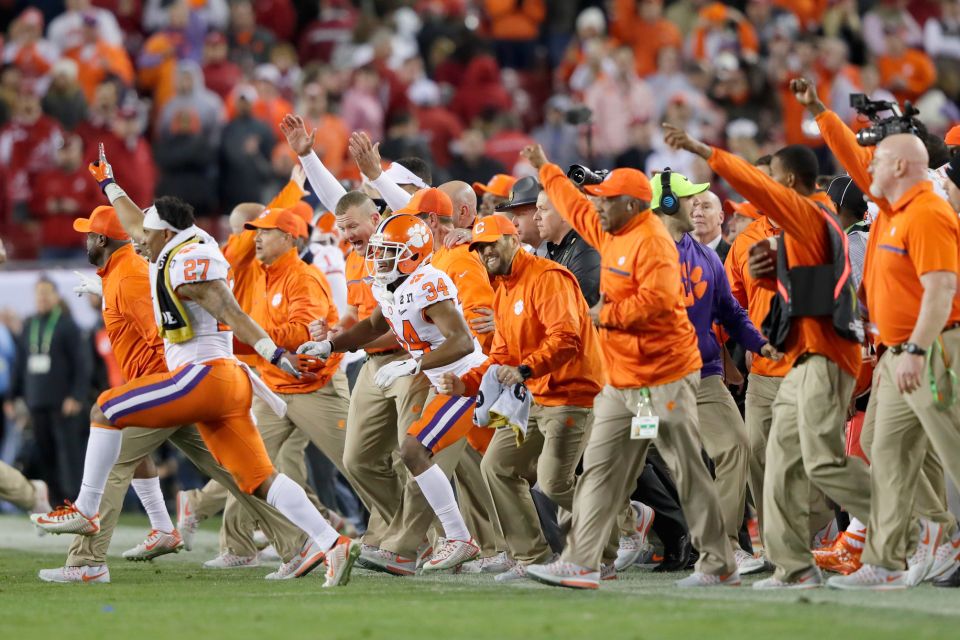 This time around, it was Clemson who stood tall.

Alabama took a 7-0 lead in the first quarter behind a 25-yard touchdown by running back Bo Scarborough. The massive back followed that up with a 37-yard touchdown to put Alabama up 14-0 in the second quarter. Freshman quarterback Jalen Hurts had an up-and-down night for Alabama. His 63 rushing yards gashed the Tigers (14-1) at times throughout the night. However, his passing (13-for-31, 131 yards, TD) left a lot to be desired.

Things almost seemed lost for Clemson late in the third quarter. Alabama tight end O.J Howard scampered 68 yards for a score to give the Tide a 24-14 lead in the third.

Which only made Watson buckled the chin strap a little more.

Watson connected with receiver Mike Williams for a 4-yard score early in the fourth quarter. The touchdown tightened the lead to 24-21.

Coming into the game, many called the 2006 Rose Bowl as the greatest national title game ever. In that game, former Texas Longhorns QB Vince Young cemented his legacy. Many compare Watson to Young. The last few minutes of the fourth quarter in this contest might have bolted Watson’s legacy as well.

A 6-play, 68-yard drive by Hurts and Alabama seemed to shut the door. Hurts diced through the Clemson defense for a 30-yard touchdown with 2:07 left in the game and a 31-28 lead. The run was a surprising one as Hurts dodged and broke tackles through a tired Clemson defense. On the night, Alabama totaled 376 offensive yards. With 221 of them coming via the run game. Scarborough led the team with 93 rushing yards along with his two touchdowns. Scarborough was also injured late in the game with a knee injury and missed significant time in the second half.

On the game’s last drive, Watson completed a key 3rd-and-3 to Renfrow with 28 seconds left. He also found tight end Jordan Leggett two plays later for 17 yards, down to the Alabama 9-yard line. Another two plays followed, then Watson found Renfrow in the right corner of the end zone for the game-winner. A touchdown that also ended Clemson’s 26-game losing streak to Alabama.