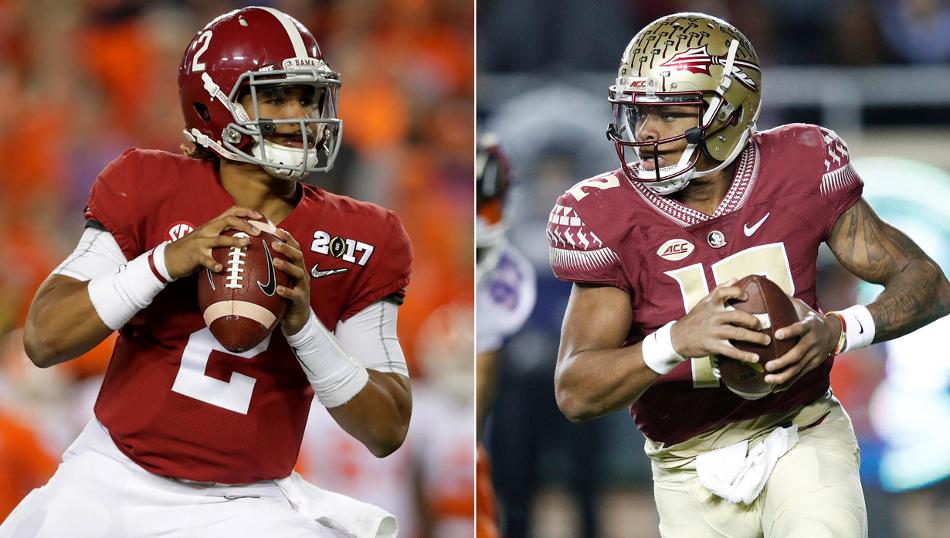 At least that is how many are viewing what may possibly be a National Championship preview in this year’s College Football Playoff. On one sideline is a Crimson Tide team coming off a last-second defeat at the hands of the Clemson Tigers in the national title game back in January. On the other side is a Florida State team that ended their season with 33-32 win over Michigan in the Orange Bowl and returns what may be the best secondary in the country. The Tide versus the Noles. Two heavyweights going at it to kick off the season. Oh, did I mention that both coaches (Alabama’s Nick Saban and FSU’s Jimbo Fisher) have history between the two? Let’s preview the elite matchup.

What To Know About Florida State

Many wondered how the Seminoles offense would operate with redshirt sophomore quarterback Deondre Francois under center as the season opened. After passing for 3,350 yards and 20 touchdowns while scoring another five touchdowns on the ground, questions no longer remain about Francois and his game. The Noles offense is in solid hands with him but he will have new faces behind him at running back. Exit former starter Dalvin Cook and his 4,464 career rushing yards and insert Jacques Patrick and Cam Akers, who have a combined 664 career rushing yards between them. The Noles offense averaged 35.1 points per game last season and posted six games of 35 or more points. The offensive line will have to replace a veteran starter at left tackle and the trio of Nyqwan Murray, Auden Tate, and Keith Gavin will now be called upon to be the primary targets at receiver.

On defense, the much anticipated return of safety Derwin James elevates the unit alone. The 2015 freshman All-American was sorely missed last season after suffering a meniscus injury in week two. In the same secondary is junior corner Tarvarus McFadden, who tied for the nation lead last year in interceptions with eight. Defensive ends Josh Sweat and Brian Burns combined for 15.5 sacks last season and are now viewed as the team’s main options to rush the passer after the departure of DeMarcus Walker. The team’s leading tackler, linebacker Matthew Thomas, returns as does stout defensive tackle Derrick Nnadi.

What To Know About Alabama

Even with a true freshman at quarterback, the Crimson Tide rolled right along through the season on their way to the National Championship. The powerhouse team were 14-0 entering the last contest of the season with nine of those wins coming with their opponent scoring 10 points or less. Sophomore dual-threat quarterback Jalen Hurts gained a ton of experience last season. Hurts started every game and totaled 3,734 combined yards with 36 touchdowns accounted for. Running back Damien Harris led the team in rushing with 1,037 yards while Bo Scarborough proved to be the most talented option in the backfield with 812 yards and 11 touchdowns. Junior receiver Calvin Ridley is one of the of the best playmakers in the SEC and the country. His 2016 season saw him post 72 catches and seven touchdowns

Year in and year out, one constant from an Alabama Crimson Tide team is a plethora of elite defensive talent. With the amount of key defenders lost last year, the team will have to replace 398 tackles, 74.5 tackles for loss, and 36 sacks from this past season. The leading returning tackler is free safety Ronnie Harrison but next to him may be the best defender in the SEC in corner/safety Minkah Fitzpatrick. Fitzpatrick was the SEC leader in interceptions with six and also recorded two pick-6s on the year. Linebackers Shaun Dion Hamilton and Rashaan Evans combined for 116 tackles and six sacks and are now the leaders at the ever-changing linebacker position for Alabama.

Outside of the preseason rankings and expectations for both teams, what makes this game also intriguing is the fact that both teams lost a considerable amount of important personnel. For the Noles, the main responsibility is replacing key production on offense at wide receiver and running back. For the Crimson Tide, many faces will be replaced on defense.

Both teams have experienced quarterbacks to rely on. Two different styles that will test the defense of the opposition. It helps both defenses that there is plenty of experience in the secondaries. The play of Fitzpatrick and James will entice many as they are two of the best defensive backs in the entire country.

The Crimson Tide have opened the season with top 25 non-conference opponents before. Wins over West Virginia, USC, and Wisconsin in recent seasons are clear examples as to how Alabama treat these type of games. Granted, this Florida State team is better than those three teams at the time they played Alabama. So the Crimson Tide will be tested and vice versa.

Where this game will lie is the run game and the ability to be efficient on offense. Alabama has the more reliable run game right now and they also have less questions on the offensive line than Florida State. Both teams will have elite talent on display but Alabama will win in the trenches enough to kick off the season with a massive win.