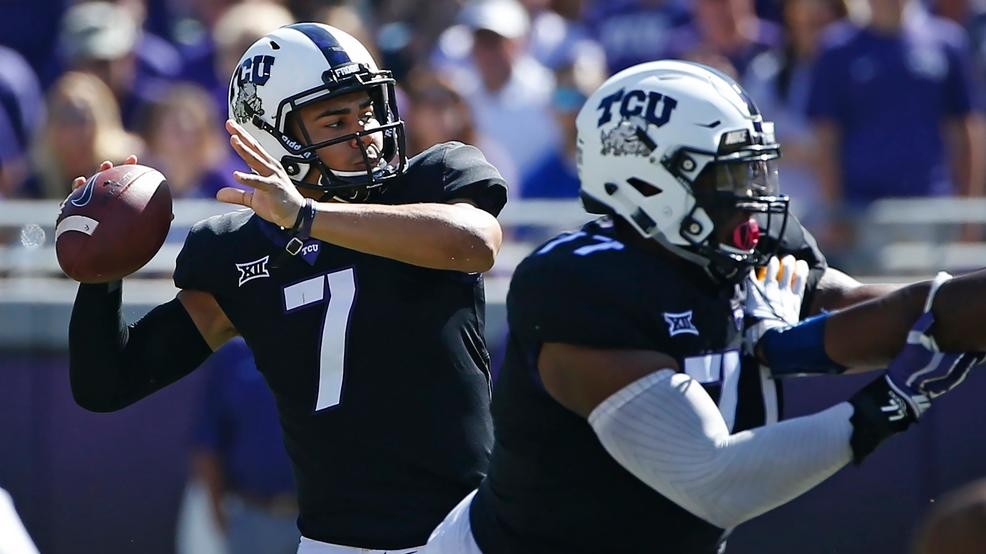 The overall slate of games across college football in week six was a little underwhelming but that does not mean there was not a decent share of excitement and interesting developments.

The biggest upset of the day came in Norman. Oklahoma as the #12 Oklahoma Sooners fell at home to unranked Iowa State as the Sooners defense allowed 368 passing yards and three touchdowns. The #1 Alabama Crimson Tide finally got tested for the first time since the season opener, which seems like years ago. For the fourth time this season in six games, the #9 Ohio State Buckeyes scored at least 49 points as they easily handle Maryland this past weekend. What else did we observed during this weekend in college football? Let’s take a look.

Michigan State Does It Again

For the eighth time in the last ten meetings, including four of their last five trips to Ann Arbor, the Michigan State Spartans scrapped their way to a win over arch rival #17 Michigan Wolverines. The 14-10 win for the Spartans came in the midst of a rainstorm late in the game and five turnovers by the Michigan offense. Spartans head coach Mark Dantonio is one of the most underrated coaches in college football and during a season where expectations were considerably low, Dantonio pulled the best out of his bunch to improve to 4-1 on the season.

It was a slow day overall for Penn State star running back Saquan Barkley, who only totaled 83 yards from scrimmage in Saturday’s 31-7 win over Northwestern. It was Barkley’s lowest scrimmage total since a late November contest against Michigan State last season. However, the story here is that even with an average outing from their superstar, #3 Penn State still steamrolled a conference opponent thanks to solid play from quarterback Trace McSorley and a defense that held Northwestern to just 265 yards. Its another sign that Penn State may be capable of winning games handedly without heroics from their elite running back. Seeing Barkley shutdown in that manner won’t happen often but it is a good sign that without their stud, the train keeps rolling along.

Coming into the season, it seemed that the ACC Atlantic Division would come down to a three-way dance between #2 Clemson, Florida State or Louisville. At this point in the season, #20 North Carolina State appears to be the biggest roadblock between Clemson and the ACC Championship. NC State’s 39-25 win over Louisville this past Thursday night has the Wolfpack sitting at 3-0 in the conference. Mark your calendars for November 4th. The Tigers travel to Raleigh to tussle with the Wolfpack with what is shaping to be a huge game with the ACC Atlantic Division on the line.

It isn’t the Texas Longhorns, nor the Texas A&M Aggies, it is the #6 TCU Horned Frogs that are head and shoulders the best team in the state of Texas this season and a team that may very well be the best team in the Big 12. A 31-24 win over West Virginia this past Saturday was their second straight win over a then-ranked opponent and with Oklahoma suffering an ugly home loss, the Horned Frogs are sitting alone in first place in the Big 12. Two road games lie ahead for TCU (Kansas St, Iowa St) and both have the features of what may be those tricky midseason games that look easily winnable. The talent is apparent led by quarterback Kenny Hill and running back Darius Anderson but can this team maintain the focus? It is definitely under the microscope in the upcoming weeks.

How Good Is The Defense, Really?

A quiet development so far this season has been a defensive unit in the Pac-12 that has been very, very productive. The unit that I am speaking of is none other than the defense of #8 Washington State Cougars. The defense is ranked 11th overall, allowing only 275.5 yards per game, tied for seventh in the country in sacks per game, and 23rd in the country in scoring defense. However, are they really as good as the stats indicate? So far, they have played the likes of Nevada, Oregon State, and Montana State. Not necessarily a gauntlet of opposing offenses but they have faired well against USC and this past Saturday, against Oregon. We will know more down the line with games against Arizona and Stanford, two teams who average 36 or more points plus their annual showdown against rival #6 Washington.

An Epic Rally By The Canes

It started off very ugly in the first half as the #11 Miami Hurricanes were on the road against their bitter rival Florida State on Saturday. It was also ugly when the Seminoles took a 20-17 lead with 1:24 remaining in the game as a result of a touchdown pass by Florida State true freshman quarterback James Blackman. By that time, Miami was staring at an eight-game losing streak to the Noles. With six seconds remaining in the game, that despair was dashed as the Canes pulled ahead for the win thanks to a 23-yard touchdown reception by wide receiver Darrell Langham Jr. Many used this game as a stage to determine if Miami was Miami. Their hard fought game against Florida State proved that head coach Mark Richt has the program on the straight and narrow path and the Canes are on the doorstep of college football nirvana.