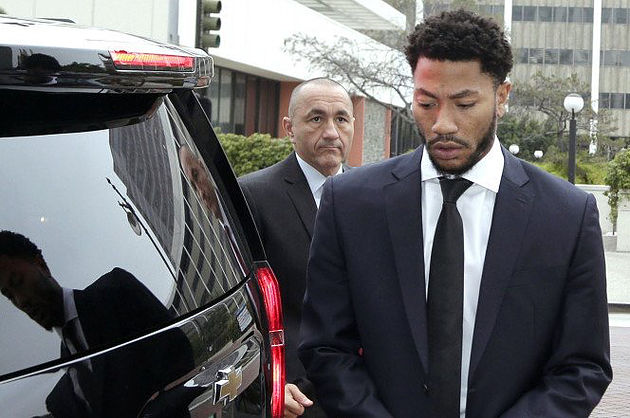 Today a Los Angeles jury found Derrick Rose, and his two friends, not liable and were cleared of any wrongdoing in the drugged gang-rape civil case against them. Taking a step back, Rose’s accuser alleged that Derrick and his two friends drugged her and then gang raped her. The case went on since the beginning of this month and a verdict was reached today. Whenever, you have a woman accusing a man, in this case, a high-profile athlete there’s always two extremes of opinions.

One of the main reasons women do not come forward when they are a victim of sexual assault is because of fear and the backlash that comes with it. Especially in a situation when the woman is accusing a man of power or have a high status in society such as an athlete or a politician. All to often, these women are victimized and are blamed for their own sexual assault. Some of the common questions they are asked are “Why didn’t you say something earlier?” or “Why are you suing for money and not trying to send your accuser to jail?” This is a dangerous way to think because it puts so much pressure on the victim and that’s part of the problem we have today as a culture. To be blunt, these women are facing a “Damned if you do, damned if you don’t” type situation. People should realize that there are men who are in power that feel as though they can make people do whatever they want. These men have power and money and often times have the means and resources to make things go their way. So, if a woman accuses them of sexual assault they find themselves feeling hopeless and alone because their voices fall on death ears. That is why it is imperative for men to not jump to this conclusion because it can have grave consequences. With that being said, this wasn’t the case in the Derrick Rose civil trial.

The second extreme line of reasoning is that the man is always guilty, or in a civil case, liable when a woman accuses him of sexual assault. This is also dangerous because of a bluntly honest fact that we hate to recognize due to the severity of the situation. There are women that lie about being sexually assaulted so they can be compensated unjustly in a monetary way. It is sad and sadistic and really hurt women who are real victims of sexual assault. Rushing to judgment and automatically deeming the man as guilty doesn’t do us any good. You may recall the Duke lacrosse team and how that story turned out. The entire world was against those young men and when it all played out it came to be that they were the real victims.

The point to be made here is that Derrick Rose’s case should not being used as a model standard for victims of sexual assault. Yes, Rose and his friends found themselves in a situation that could have been prevented. Nonetheless, it is not fair for us, the public nor the media, to automatically deem him as “guilty” or not “guilty.” We have a system in this country that isn’t perfect but we trust it nonetheless. Derrick Rose could have settled and made this go away a very long time ago. However, he risked public scrutiny, and his very private life to become hot takes on social media sites to vindicate himself. Rose said in a statement, “It was important to prove I did not do what I was accused of…even if that meant publicly sharing very private details.”according to Julia Marsh of the New York Post.

Yes, it is important for us as a society to keep the conversation going about sexual assault. We should inform men and young boys that by no means should you get someone drunk to make sexual advances; that is wrong! However, using Derrick Rose as a model isn’t the answer. We should encourage women to speak up and empower them and let them know that we will support them through this difficult time. At the same time, we should condemn women who lie about these things because they are hurting the greater cause. It is imperative to have all of these conversations and changed the culture. If anything, that is what should be taken from this Derrick Rose civil trial.