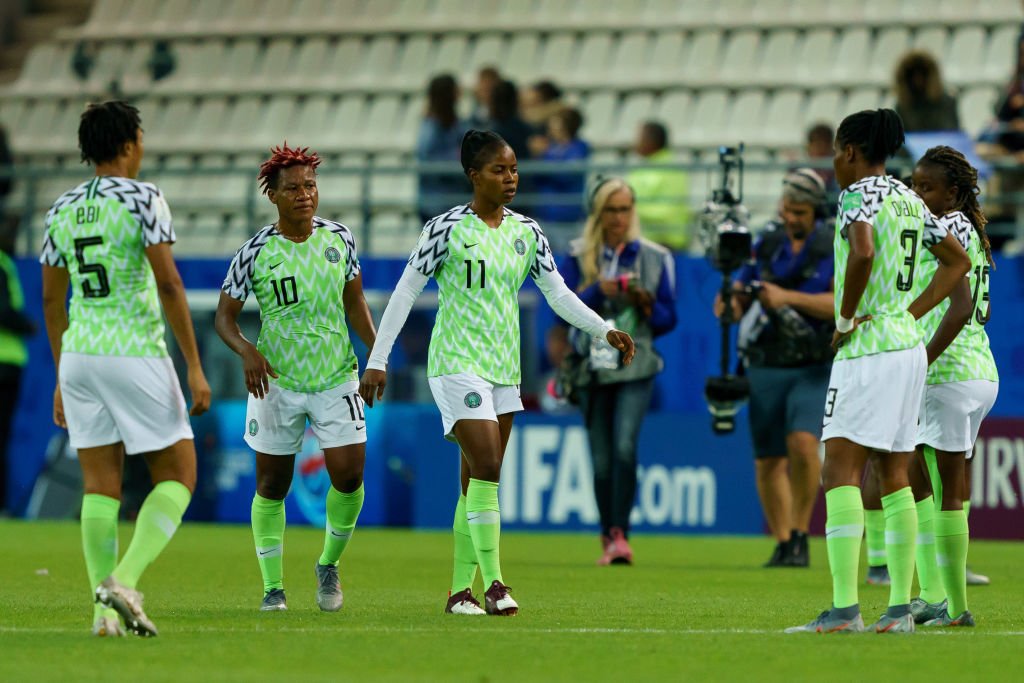 Nigeria kicked off their 2019 FIFA Women’s World Cup tournament on June 8 at the Stade Auguste-Delaune in Reims against Martin Sjögren’s Norway with a 3-0 loss courtesy of goals from Guro Reiten, Lisa-Marie Karlseng Utland and an own goal from Osinachi Ohale.

However, the Super Falcons confidently rectified their opening group game defeat four days later in their second group contest with an assuring 2-0 victory against South Korea at the Stade des Alpes in Grenoble. An own goal from South Korea defender Kim Do-yeon and a well-timed finish from FC Barcelona Femení star Asisat Oshoala settled the differences between the two sides.

After securing three points collectively from their opening two group encounters at the 2019 FIFA Women’s World Cup, Thomas Dennerby’s brave Nigeria side subsequently headed into their third and final group encounter against hosts France at Roazhon Park in Rennes five days after their 2-0 group win against South Korea. However, the Super Falcon’s pragmatism and defiance against the possession-dominating and commanding France remained fully intact against Les Bleues until France’s Wendie Renard comfortably converted a controversial second-take penalty to seal a 1-0 victory for Corinne Diacre’s side. Irrespective of Nigeria registering significantly less overall shots on goal (2 shots compared to France’s 22) and having less possession (31% in contrast to France’s 69% possession), the ever-persistent, hard-working reigning African Women’s Cup of Nations champions diligently fought against France throughout the course of the contest, which witnessed the Super Falcons robustly outmatch France in clearances (48), tackles (18) and cover 63km (France covered 66km) as a team throughout the game.
Nigeria finished third place in Group A behind group winners France and second place Norway. The Super Falcons, however, could potentially qualify into the final sixteen of the tournament based on the best third placed teams during the group stages. The outcome of the final results from the pending and remaining 2019 FIFA Women’s World Cup group contests: Scotland vs. Argentina, Cameroon vs. New Zealand, coupled alongside Chile vs. Thailand, will determine Nigeria’s progression into the final sixteen.
Before Nigeria’s final group game against France at Roazhon Park in Rennes, FOX Sports Radio 96.9 FM/1340 AM’s Dean Perretta quickly caught up with one of Nigeria’s most highly decorated and widely respected footballers, Onome Ebi, the first-ever woman to compete at five FIFA Women’s World Cup tournaments (2003, 2007, 2011, 2015 and 2019) with over 80 senior international caps, as well as a prestigious four-time Africa Women’s Cup of Nations champion with Nigeria (2010, 2014, 2016, 2018), to discuss the Super Falcons at the 2019 FIFA Women’s World Cup and the west African giants experience in France and beyond.

Dean Perretta: Onome, Nigeria still has an opportunity to advance into the final sixteen of the 2019 FIFA Women’s World Cup via the best third-placed teams. With that being said, what are your overall thoughts on the performances from the team so far?Onome Ebi: We didn’t start off well (in the tournament) but regrouped (after the opening loss 3-0 against Norway) to give ourselves a good chance of qualifying for the next round after the (2-0) win against South Korea. As the tournament has gone on, we have improved. We are pleased with our efforts and know we can do better.

Dean Perretta: The Super Falcons heart-breaking 1-0 loss to France, however, at the Allianz Arena in Nice was marred by a relatively dubious decision amongst officials which led to a penalty re-take. In hindsight, however, what positives do you take from this game in particular moving forward?Onome Ebi: We were very disciplined in the match throughout (against France) and always believed we could get something (from the game). The (Nigeria) team played for each other and till that turning point (the penalty which we conceded) we had more than held our own. So we look forward knowing that we can be a match for anyone (in the tournament).

Dean Perretta: Thomas Dennerby has described the Nigerian players as “heroes”. What does it mean from a personal and professional perspective to hear such a glowing tribute, especially from the Head Coach?Onome Ebi: I respect the coach (Thomas Dennerby), as do all the (Nigerian) players, and any positive words from him will always encourage us (to do better).

Dean Perretta: How has the overall reaction and support been back home in Nigeria with regards to the Super Falcons at the 2019 FIFA Women’s World Cup?Onome Ebi: You can see it on social media (during the tournament), the support (for us in our country) has been amazing and it shows how much women’s football has become global.

Dean Perretta: Lastly, and more importantly, can you talk about the quality within the Nigeria team and, of course, what it means to you as a woman to inspire the next generation of Nigerian women to get involved with football?Onome Ebi: You can see from our team, the mixture of experience and talent. We have a lot of young players coming through. For me personally, I always encourage young girls to take part in the sport.