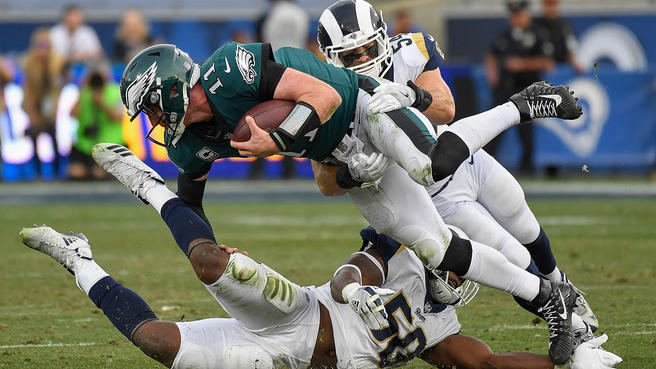 It seems like the plague of the “torn ACL” has hit the league heavy this year and the next victim of this unfortunate reality is Philadelphia Eagles’ star quarterback Carson Wentz.

After Sunday’s win against the Los Angeles Rams, Eagles’ fans were less excited about clinching the NFC East and were more worried about their chances of snatching the Lombardi without their star quarterback.

Late in the third quarter with the Eagles down by four, Wentz tore his ACL diving for a touchdown. While his sacrifice to take the lead was quite impressive, the result of it, not so much. Backup quarterback, Nick Foles, took the snaps for the remainder of the game and completed six of his ten pass attempts for 42 yards.

Foles and the Eagles were able to fly away with a 43-35 victory but at a cost that will certainly diminish their Super Bowl hopes. The worse case scenario for Philadelphia is that they will finish off with the second seed which isn’t entirely too bad of a reality compared to that of their division rivals, the New York Giants or the Washington Redskins.

Philadelphia will face the Giants, Oakland Raiders and the Dallas Cowboys to end the season. I’m more than positive that the six year veteran can handle that workload if his past performance starting for the Eagles while Michael Vick was injured was any indication.

In 2013, when Vick was injured against the Giants, Foles stepped in and started 11 of Philadelphia’s next 12 games. He completed 203 of his 317 pass attempts for 2,891 yards recording 27 touchdowns and two interceptions. The sophomore finished with a passer rating of 119.2 and led the Eagles to the wild card round of the playoffs.

Those statistics speak volumes for a young quarterback who stepped up when his name was called but now nearly four years later, the scope of the league has changed dramatically and the success of his early career doesn’t give Eagles fans much hope in the wicked NFC.