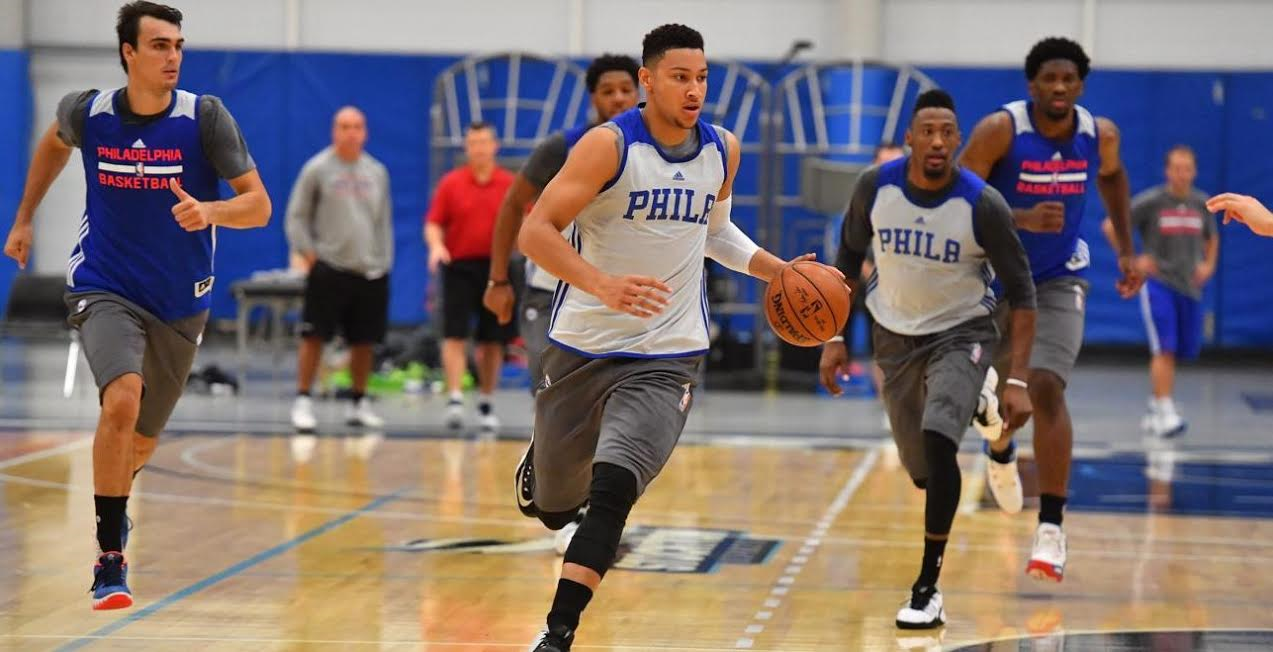 #TrustTheProcess was laughed at in its inception. First spoken by guard Tony Wroten, it seemed impossible to trust what Sam Hinkie was doing. How could you? The Philadelphia 76ers were mired in mediocrity and were trading away their best players, including Rookie of the Year Michael Carter-Williams, for draft picks way down the line. They drafted three centers in a row for God’s sake – Nerlens Noel (hurt), Joel Embiid (hurt) and Jahlil Okafor (bad).

But now? It’s a little easier to Trust the Process. Yes, their best players are still mending – Joel Embiid only got through 31 games this year despite being on a minutes restriction and not playing in back-to-back games. First overall pick Ben Simmons didn’t play a single minute this year because of a Jones fracture in his right foot, presumably from putting on too much weight at once. Still, the 76ers accomplished a few things – they found out that Robert Covington is a really solid 3 and D player, Dario Saric is a great 6th man and they won 28 games in the process after only winning 10 the previous year.

The 76ers are set to add a top tier prospect in the draft this year as they hold the #3 pick. Could they trade up for Markelle Fultz? Could they trade back and add Malik Monk? Could they stay at #3 and take Josh Jackson? It all remains to be seen. In addition, the 76ers are set to add the Laker’s first round selection in next year’s loaded draft class – hello Michael Porter Jr. or Luka Doncic! The point is, the 76ers have a ton of young talent now and are set to add more in the near future. They have their corner stone pieces in Embiid and Simmons, and could easily add a third by way of a Paul George/Jimmy Butler trade, trading up for Markelle Fultz or their own selection at #3. That makes their free agency direction a lot clearer: they don’t need to chase big names at all (sorry to dash your Kyle Lowry dreams), they just need to add some veteran pieces to a stable foundation. Here are five names that make sense to add to Philly’s squad.

George Hill is a great fit for any NBA team needing a point guard as he falls into that good, but not great Swiss Army knife category. I’ll get into why that can be a negative in a second, but first the positives.

Hill is a solid point guard. He can set the table on offense, as well as play-off-ball, which is crucial as Brett Brown has said he wants Ben Simmons to act as the point guard whenever he’s in the lineup. That works for Hill, as he’s a 38% shooter from three. When Simmons sits, Hill is more than capable of running the show. At 6’3” with a 7’0” wingspan, Hill has the size and the bulk to defend both 1’s and 2’s, something that would only help the 76ers defense. If the 76ers draft Malik Monk, he’s more than capable of playing shooting guard – conversely, if they draft Josh Jackson and go with an oversized lineup, Hill doesn’t have a problem at point guard.

The problem lies in his versatility, as weird as it sounds. Any team with a point guard need can slide Hill into their situation and he’d fit well. A return to San Antonio or Indiana is certainly plausible. If Jrue Holliday prices himself out in New Orleans, Hill could fit pretty well with the twin towers known as Anthony Davis and DeMarcus Cousins. He could bring stability to New York’s offense or return to Utah. Hill’s contract can easily run north of $20 million annually and while it’s not as if the 76ers are cash strapped, it wouldn’t be the smartest move to sink that type of money into an older PG. It’s worth calling his agent and gauging his interest however, as George Hill can add some legitimacy to the Philadelphia backcourt.

In many ways, Patty Mills should be the ideal target for the 76ers if they don’t add Malik Monk. He’s not a primary ball-handler, but that’s okay because Ben Simmons will get the lion’s share of those responsibilities anyways. He does function well as a secondary ball-handler and he’s a solid three point marksman, hitting 41.3% from three. While he wouldn’t be a secondary or tertiary scorer (depending on how Simmons is used and adapts to the NBA), he will do enough to keep defenders honest and not pack the paint.

The only problem is his defense. Standing at 6’0” and 185 pounds, Mills isn’t exactly the biggest guy on the court and has gotten exposed against bigger, faster point guards. It has helped that thus far in his career he’s played mostly off the bench, hiding his weaknesses: moving him to a starting role could expose that. While Joel Embiid and Robert Covington are good defenders, we’re not exactly sure who will be starting at the 2 in Philly or how Ben Simmons will be as an NBA defender. I am certain, however, that former Spurs assistant and 76ers head coach Brett Brown will know how to utilize him best.

Still, the 76ers could do a lot worse than Mills in free agency; so long as his contract doesn’t get too inflated, Philly should come calling about his services.

I promise that this is the last San Antonio tie-in. Brett Brown actually doesn’t have a direct link to Jonathon Simmons, as Brown left San Antonio before Simmons’ rise. Still, there’s plenty of Gregg Popovich’s philosophies in Philly and adding Jonathon Simmons would help propel the 76ers toward a playoff push.

Simmons is a springy 6’6” guard who is the definition of what Bulls color commentator Stacey King likes to call “heart, hustle and muscle.” His story has been well documented, and his hustle on gritty play on the court would endear him well with the Philly crowd. He may not be equipped to take on the best perimeter player as a defender, but rather  spearheading the defense on secondary options. His three point shot is still a work in progress at 29.4%, but Simmons isn’t the type of player to sit on his laurels. Once Kawhi Leonard went down in the Golden State-San Antonino series, Simmons was clearly the Spurs’ best player. The tandem of Simmons and Covington on the wings with Ben Simmons and Joel Embiid roaming the paint is a defensive nightmare and Philly could stand to capitalize on it.

The only real hurdle is that Simmons is a restricted free agent, meaning the Spurs will have all opportunities to match his contract. Thanks to a clause called the Gilbert Arenas provision, Simmons can’t make more than $8.4 million next season. It would behoove San Antonio to keep him in the fold, retaining as much athleticism and defense in this ever-changing NBA as possible. Still, the 76ers have plenty of cap room and could always just backload his contract; however, they will have to pay Joel Embiid and Ben Simmons somewhere down the line and a Robert Coving contract extension isn’t too far off.

Kentavious Caldwell-Pope is an interesting case. He garnered a ton of hype coming out of college as THE 3 and D prospect. He’s only somewhat lived up to the 3 aspect, connecting for 33.4% over his career and 35% last season. Caldwell-Pope has been an average defender thus far, although to be fair, none of his Pistons teams were great at defense. KCP seems to be a case of untapped potential and a change of scenery could do him some good.

That’s where the danger lies though. Potential doesn’t always turn into results. KCP was never truly blocked in terms of being on the court – he’s averaged at least 19 points a game for the last 4 years, including his rookie year. In terms of touches, his usage percentage – percent of plays ran for a player – has hovered around 20%. Sure, his teams weren’t great, but it’s also not like he was putting up stellar numbers on a bad team either. Brooklyn supposedly has a soft spot for KCP and with enough cash to throw around, you wonder if they don’t just offer him a max contract and be done with it. Kentavious Caldwell-Pope is a great fit basketball wise, but he might be outside of the budget for the 76ers, forcing them to turn to other gems such as Tim Hardaway Jr. or Ben McLemore.

I know, I know, I said no big names for the 76ers, though you might have a different definition of a big name than I do. Redick is most likely going to be heading back to Los Angeles as the Clippers foolishly keep the band together. He’s not a great defender, but he’s savvy enough not to be a total liability. He’s a great three-point shooter and solid enough putting the ball on the floor to not be labeled just a spot up shooter.

The problem lies with his contract. Redick is reportedly looking to get around $20 million annually. If I’m the 76ers, I’m not doing that. The team needs veteran players to start helping move the needle towards the playoffs, but not at that price tag. It could just be all rumors, and if he’s willing to take less than that on a shorter contract – say 3 years, $45 million with a team option on the third – then it’s worth having the discussion. But for now, Redick is out of their budget and likely doesn’t have them in his sights.