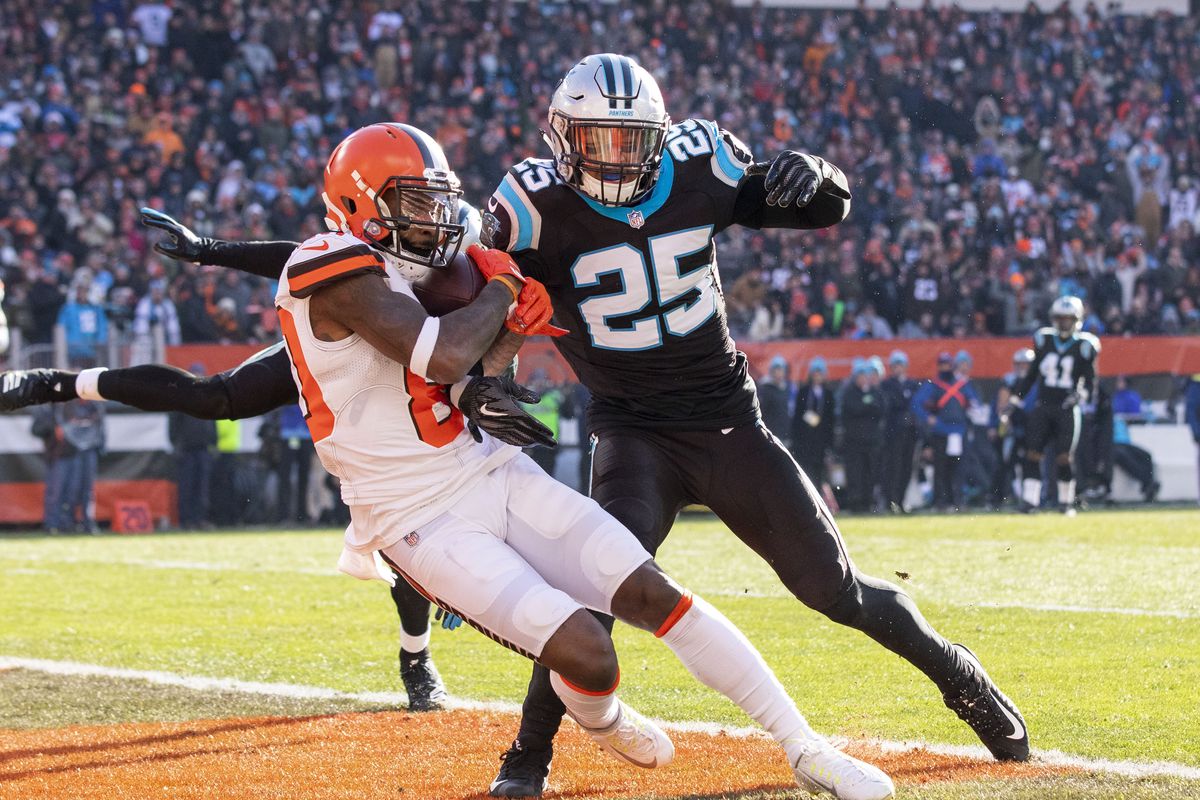 Different week, different opponent, same result,  After starting 6-2 the Panthers have dropped their last five games falling below .500 and all but out of the playoff picture.  The Panthers won the turnover battle and had possession of the ball a little over 7:30 longer than the Browns but still left The Land with a 26-20 loss.

The Panthers’ Achilles Heel continues to be large chunk plays and 20 plus yard plays over the top.  Baker Mayfield and the Browns went 75 yards on 3 plays – the bulk of that coming on a 66-yard pass to Breshad Perriman that set up 1st and goal from the 9-yd line.  Jarvis Landry scored a few plays later.  Then, facing 3rd and 17 from their own 49-yard line, Mayfield found Landry for a 51-yard touchdown reception in the end zone in the second quarter.  In the fourth quarter, Landry picked up 51 yards on a rush off the right guard to set up a 4-yard touchdown by Nick Chubb.

Its a narrative that has become all too common during this 5-game skid.  Speaking with media following the game head coach Ron Rivera said that they have worked on preventing the big plays everyday in practice but “its not sticking.”

“We try to get it rectified every day in practice. Unfortunately, it’s not sticking, and we need to continue to work on it as coaches to make sure we’re getting it across. The most important thing is that they have to understand how important it is to keep things in front of them, and not give up big opportunities. We had some opportunities that we missed. We had some opportunities to make plays, which we didn’t.  Again, we always have to make sure at the beginning that we are putting them in a position to be successful.”

Another shot in the Panthers’ foot came by way of penalties.  Although both teams had their fair share of penalty yardage, it was the timing of the penalties that were costly.  On 4th down, the Panthers got a delay of game penalty that took them out of field goal range and they were forced to punt instead.  Overall, the Panthers were flagged for ten penalties for a total of 68 yards while the Browns had seven penalties for 52 yards.

The red zone woes also continued as the Panthers had an opportunity to take the lead late in the game but instead turned the ball over on downs on the Browns’ 3-yard line.  Facing fourth and goal from the 3, Newton overthrew Jarius Wright in a play that was eerily reminiscent of the failed 2-point conversion a few weeks ago in the loss to Detroit.

Following the loss, Newton couldn’t quite come up with the words to say.

“I don’t know. It’s extremely frustrating to come up short each and every week with similar settings and not be able to push through. I wish I had the words to say but I don’t. In this league, that’s what I always come down to: finding ways to keep the game close. We just haven’t found a way to win.”

The Panthers final drive was halted when Newton threw an interception on the first play of the series with a little over one minute remaining in the game.  Newton finished 26/42 for 265 yards and one interception while Mayfield finished 18/22 for 238 yards and one touchdown.  Curtis Samuel led the Panthers in receiving with 80 yards while tight end Ian Thomas was impressive in his new elevated role finishing with nine catches for 77 yards.  Christian McCaffrey was the lead rusher finishing with 63 yards on 16 carries; he also added six catches for 38 yards.  Nick Chubb was the leading rusher for the Browns finishing with 66 yards on 13 carries while Breshad Perriman hauled in a whopping 81 receiving yards on only two catches.

The Panthers slide to 6-7 while the Browns improve to 5-7-1.  The Panthers return home for a Monday Night Football match-up with divisional foe New Orleans Saints.