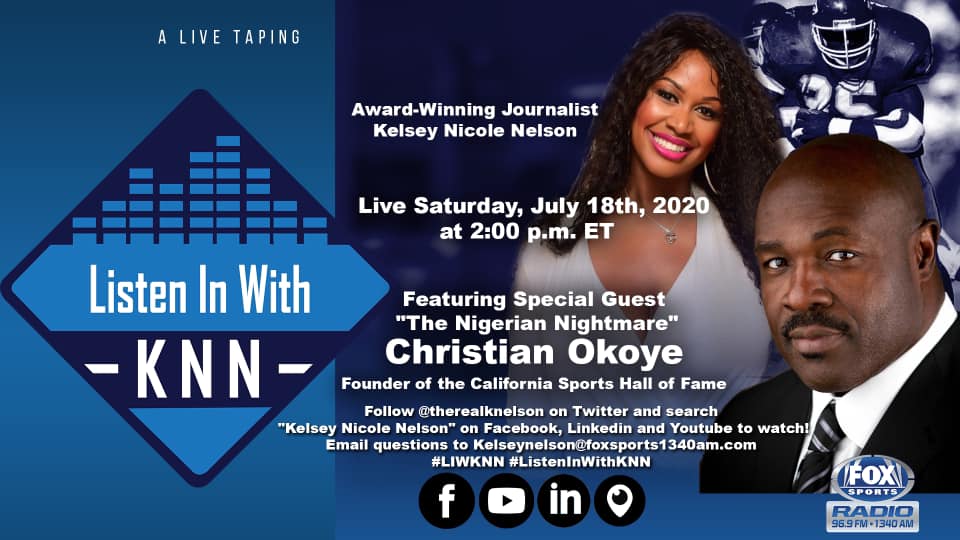 On the latest episode of Listen In With KNN on Fox Sports 1340AM, host Kelsey Nicole Nelson welcomed in former National Football League (NFL) running back and founder of the California Sports Hall of Fame Christian Okoye, also known as “The Nigerian Nightmare” to the show.

He was born and raised in Nigeria where he played soccer, track and field, shot put and discus. It was those skills that led him to America where he attended to Azusa Pacific University in 1982 with aspirations of playing in the Olympics. But Okoye was rejected by his native country and decided to play football.

“I did very well and the scouts came and tried me out to see what I could do. I was invited to go and play in the Senior Bowl and scored four touchdowns,” said the Nigerian native. “The (Kansas City) Chiefs drafted me in the second round in 1987 and the rest is history.”

Okoye spent six seasons with the Chiefs where he was a two time Pro Bowler and a First-Team All-Pro. He was nicknamed “The Nigerian Nightmare” for his running style and was grateful for playing with a great organization.

“They treat everybody well and the city is just incredible. Coming to the game, I would walk through fans who were barbequing and cooking and would offer me food. After the game, I would come out of the shower, sit and drink beer with them and eat. Kansas City is my second home,” he said.

Okoye was ecstatic when his former team won their first Super Bowl in five decades this past February and is a big fan of superstar quarterback Patrick Mahomes.

“During the Super Bowl with seven minutes left and we’re 10 points behind and then score three straight touchdowns. All those things are magical and (Patrick) Mahomes is just a godsend,” he said. “If you watch Mahomes play, he’s like a kid playing in the backyard having fun. When you enjoy your game like that, there’s no pressure at all.”

As of 2018, 30 of the 32 NFL teams currently have a first generation African player on their roster and it has a special meaning for the first African star.

“I remember when I wrote my dad a letter and told him I’m going to play football. He didn’t want me to play but went and played anyway. When I started playing, all the Nigerian and African parents started putting their kids in Pop Warner now. I’m very happy to see that,” he said.

As a result, Okoye has been working with the NFL and commissioner Roger Goodell to promote the game and have an exhibition game in Africa. He expects it to happen within the next few years.

“The first person I called was the late Bill Walsh and asked him if there was any California Sports Hall of Fame and he told me no. So I started calling all the other people asking for support. With their support, that’s how I started it,” Okoye said. “We had our first induction in 2006 and we inducted 19 individuals. The rest is history.”