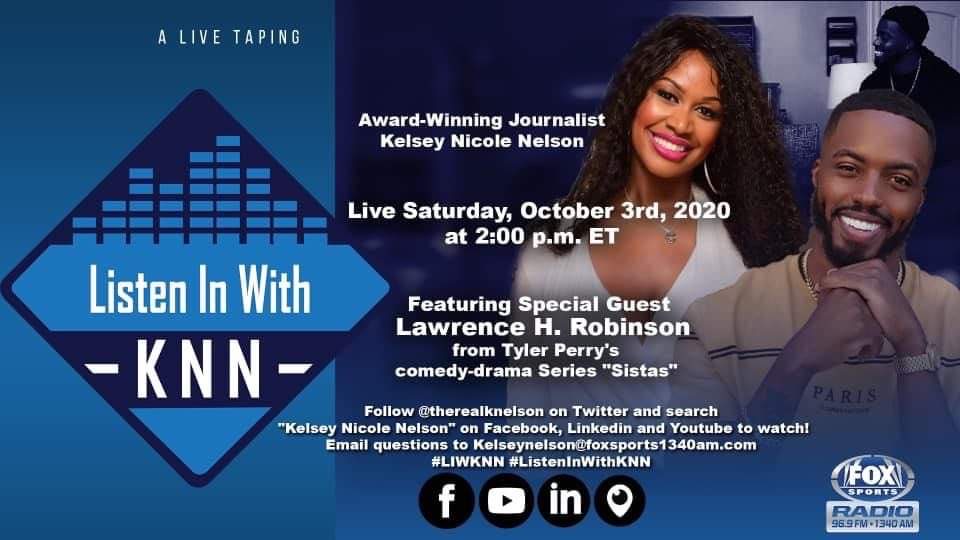 On the latest episode of Listen In With KNN on Fox Sports 1340AM, host Kelsey Nicole Nelson welcomed Lawrence H. Robinson from Tyler Perry’s comedy-drama series “Sistas” to the show.

Speaking of his journey, he grew up in West Philadelphia where it was rough. His mom was a housekeeper and his dad was a car salesman. In spite of these circumstances, Robinson was determined to get out of Philadelphia.

“You have to be a confident person in Philly because if you’re not, you’re going to get beat up. You got to be a strong person and I definitely got my strength and confidence from being born and raised in West Philly. I’m a regular kid from Philly who didn’t have a family member who was famous,” he said. “Everything I got was from the muscle.”

Robinson’s dream was to be an actor but started off working at an airport as a baggage handler to make ends meet. One day, he decided to pursue his dreams and moved to New York for five years and moved to LA for three years.

“Coming from a city like Philly or Atlanta, you’re always told you have to move to New York or LA. It’s been a lot of hurdles and no’s and I had to learn how to love the word ‘no’ because you’re going to hear it all the time. But I had a dream and kept moving forward but it’s been hard,” Robinson said.

In 2019, he took part in a one hour dramatic comedy series by Tyler Perry called Sistas and it follows four single girlfriends who have reached the milestone of adulthood in their 30’s. He plays a guy named Chris who had a rough childhood but beat the odds and opened his own construction business.

“I think all four of the women are amazing on and off camera and have distinct personalities. I feel like men can learn something because they can see how women think. The women can identify one of the sisters. It’s a huge hit for our community and Mr. Perry did a really great job,” he said. “Everybody should check it out because it is a feel good show.”

Season two of the comedy-drama series comes out on October 14th. Robinson enjoys working with Tyler Perry because of the attention he commands when he speaks.

“I love being in his presence because he’s so powerful but fun at the same time. It’s great working with him and then at the same time everything comes out great. He’s a man of many talents. We really had to make sure to take it seriously because we represent Mr. Perry as a cast,” he said.

Robinson encourages kids from West Philadelphia to be different while chasing their dreams at the same time.

“I was that kid that would watch 106 & Park and MTV. I knew that I had an eye for talent because I knew I had talent. When I went to community college in Philadelphia, I figured it out. I took an elective in acting and never looked back. If I was okay with being different when I was a kid, I probably would be one of the biggest actors in the world already. Embrace your difference.”