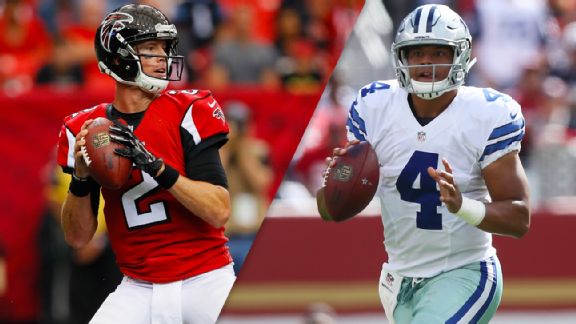 The stakes are high for both the Atlanta Falcons and the Dallas Cowboys as they go head to head in a wild card contending matchup.

If today were the playoffs the Seattle Seahawks and Carolina Panthers would snag the wild card spots at 6-3. Thankfully it’s only Week 10 so there’s still hope for Atlanta and Dallas even though the odds are stacked against them.

Atlanta has lost four of their last five games, leaving America to question if last year’s playoff run was a one hit wonder. The defending NFC champions have not had a tough schedule this season yet their 4-4 record is indicative of their inability to contend in the NFC.

It isn’t foolish to say that Atlanta didn’t see this coming thanks to their previous history.

Since 1998, every season the Falcons have a successful playoff campaign the following year they fail to make the playoffs.

The trend here is quite obvious. “History repeats itself and that’s just how it goes,” in my best J. Cole voice.

On Dallas’ end, this matchup is crucial to see how they can compete without their leading rusher Ezekiel Elliott. Dallas is second in the league in total rushing yards but that’ll certainly decrease with the loss of Zeke who contributes 66 percent of their total offense on the ground. It doesn’t take an individual with a master’s degree to know what the loss of Zeke means to the Cowboys.

Mercedes-Benz Stadium is going to be the scene of a crucial contest and how Atlanta and Dallas respond to their respective adversities will determine who truly controls their own destiny.