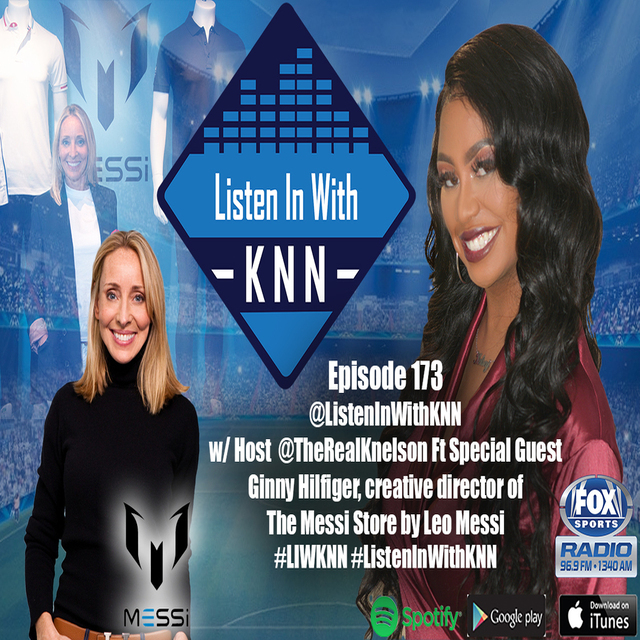 On the 173rd episode of Listen In With KNN on Fox Sports 1340AM, host Kelsey Nicole Nelson welcomed Ginny Hilfiger, who is the Chief Creative Officer of “The Messi Store” to the show.

The store is named after Lionel Messi, who is one of the top soccer players in the world. The superstar grew up in Rosario, Argentina and was picked up by Barcelona at the age of 13 where he became a prodigy in soccer. For Hilfiger, working on a brand with someone like Messi was an exciting task.

“We loved the idea because we had the feeling that the uniform in menswear is being more comfortable and casual. We just saw this trend coming of people wanting to be more comfortable and wearing things that were easier to do things like t-shirts, sweatshirts, hoodies, soft knit jackets, pull-on pants and comfortable jeans. We felt like the whole way of dressing in menswear is starting to evolve and thought this a great niche to jump on. That’s how we started,” she said.

Hilfiger is the youngest sister of famous American fashion designer Tommy Hilfiger. Her introduction into the fashion world began when she was a young kid. She worked at her brother’s boutique called People’s Place on the weekends.

“I was surrounded by clothes all the time since I was young. In junior high, Tommy used to let me come to New York City and trail him in his different companies before Tommy (Hilfiger) and I fell in love with the garments center and the fashion industry. Around age 15 or 16, I just knew that’s what I wanted to do,” Hilfiger said.

After high school, she started working at her brother’s new company called Tommy Hilfiger while attending the Fashion Institute of Technology. Hilfiger worked at the Tommy offices every day after school and helped create the first Tommy collections such as men’s sweaters, shirts and jeans.

“I did all the active and sport gear around the jeans, which was my forte. Then, I started going shopping in Europe and bringing all these track jackets and track pants back and that’s when we started doing sport tech denim in 1995. I’ve been doing menswear for so many years that it just comes naturally because I grew up with four brothers and have a lot of guy friends. I got a lot of men’s experience from designing Tommy under my belt,” she said.

Hilfiger rose up the ranks as she was the Executive Vice President of Design for the Hilfiger Brand for over 15 years. During that time, she helped with the launch of Tommy Jeans in 1995 and Tommy Girl in 1997, which became sensations around the globe.

“The fact that I was able to delegate and trust the people that worked under me and give the designers and assistants freedom to do their job without me being overly micromanaging. People need to have freedom to do their jobs without someone telling them what to do. I definitely think that it was teamwork and giving them credit and letting them bring up their own ideas,” said Hilfiger.

In 2012, she accepted a position as the Creative Director of Fila Global as her responsibility was to rebrand their apparel. They sent Hilfiger to their archives and then to the different field offices around the world to see what their speciality was.

“I loved going to the archives and going back to the beginning and doing fashion in a modern way but taking the inspiration from decade to decade. It turned out well as its stock is still growing. I love brands that have such strong histories and DNA’s,” she said.

In her career in the fashion industry, Hilfiger learned the importance of perseverance and finding solutions to every problem.

“No matter what comes my way, I know that there’s a way to figure out how to get it done. I just sit and work on it for a while until I figure it out. It’s just having faith and not giving up. If you feel insecure about a new project, you have to look back on projects you’ve done that were successful and say, ‘I can do this.’”