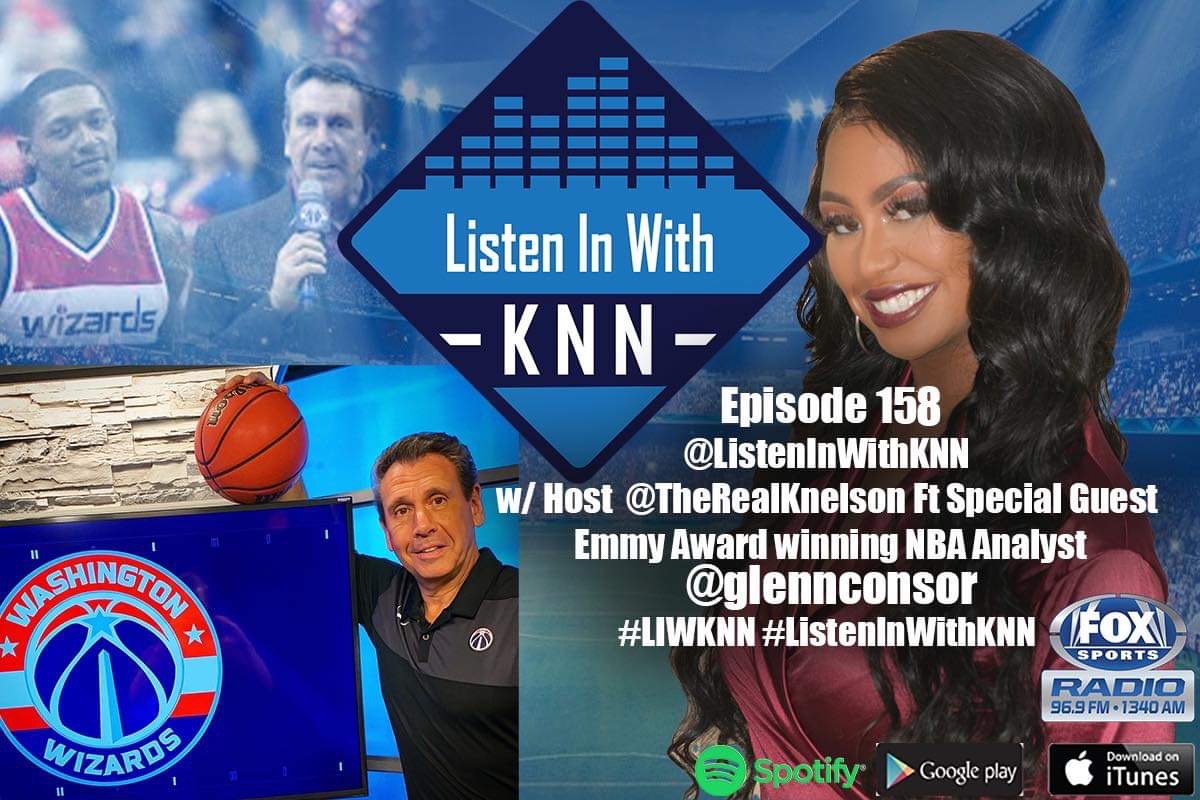 On the 158th episode of Listen In With KNN on Fox Sports 1340AM, host Kelsey Nicole Nelson welcomed Emmy Award-winning NBA Analyst Glenn Consor to the show.

He has been a broadcaster for the Washington Wizards for 22 years. During that time however, Consor was diagnosed with prostate cancer during the middle of the Wizards’ season and had surgery after the season. As a result, he became affiliated with the Zero Cancer organization and persuaded everyone to get their PSA’s (Prostate-Specific Antigen) checked.

“When I was diagnosed, I had no symptoms and was in great shape for my age and it made no sense to me. I needed to have it removed because of the amount of cancer that was in my prostate. If there’s fluctuation with it, you need to be on top of it because if you’re not, that’s when it gets really scary,” Consor said.

The Award-winning analyst will not be traveling with the team when they’re on the road because of the COVID-19 pandemic. Instead, Consor will be calling games for NBC Sports Washington from monitors as he did in the 11 games in August when the Wizards were in the Bubble.

“What makes our radio party so popular is we connect with everyone and have regular people there. People are tweeting at us and we tweet back live during the games. It’s not the same but we can do it and everybody is in the same boat,” he said. “It’s an adjustment but we’re gonna make it like we’re right there.”

Speaking of the Wizards, they shipped out long time franchise star John Wall to the Houston Rockets for fellow All-Star Russell Westbrook. The 2017 Most Valuable Player award winner averaged a triple-double for three straight seasons while on the Oklahoma City Thunder.  Westbrook is mainly known for his intensity on the court and it was something that the Wizards lacked.

“When the Wizards have played their best basketball, they’ve been the aggressors. What he brings is physicality, leadership, expertise and a unique skill set where he can rebound, pass and score from the guard position in which we really haven’t had in such a long time. He can defend multiple positions and brings that element of the nasty. To be successful in the NBA, you need to be nasty in a good way,” said Consor.

Westbrook joins perennial superstar Bradley Beal, who has led the team in scoring for the past three seasons.

“Bradley Beal and Russell Westbrook are elite and those guys know how to play together. What he is is he’s more interested in winning and so is Brad. Brad is going to learn a lot from Russell and piggyback off the way he plays,” he said.

Also, Westbrook is reunited with head coach Scott Brooks, who coached him with the Oklahoma City Thunder from 2008 to 2015. Consor believes that the trade will be beneficial for the team and the city.

“Scott (Brooks) is familiar with his game and mentioned when Russell first came to practice, they were running through some plays and Russell said, ‘hey, this is the same stuff we used to run at OKC.’ The game has changed a lot and has become a positionless game. Russell can post up little guys and blow by guys that are his size. What Scott Brooks has in Russell is versatility and what Russell has in Scott is someone that knows him so well.”