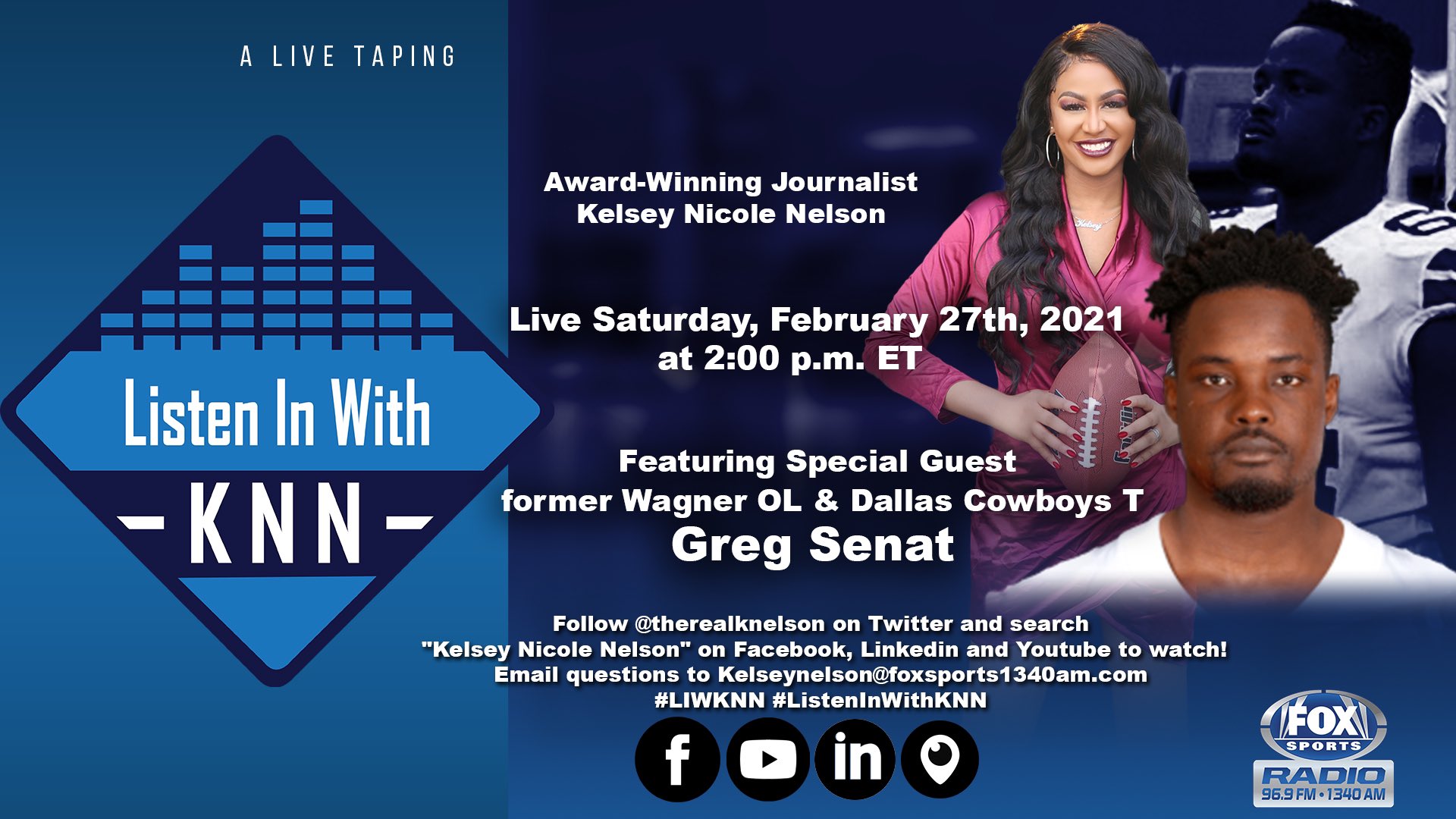 On the latest episode of Listen In With KNN on Fox Sports 1340AM, host Kelsey Nicole Nelson welcomed former Wagner offensive lineman and Dallas Cowboys tackle Greg Senat to the show.

Speaking of his journey, he grew up in Elmont, New York as his parents were immigrants from Haiti. He started playing basketball in fifth grade as it was his favorite sport to play.

Senat attended Elmont Memorial Junior-Senior High School where he starred in basketball, football and lacrosse. He played tight end on the football team for two years before transferring to a prep school to focus on basketball because he wasn’t getting any scholarship offers. Without a scholarship, the Elmont native wouldn’t have gone to college.

“I really dedicated myself that offseason of my junior year to bettering my craft and spent literally everyday at the court working on my game. I get a random phone call from some random Delaware number and I pick it up and it’s the head coach of the University of Delaware offering me a scholarship. That was the first time in my life when I truly understood what hard work can get you and when you really dedicate yourself to something,” Senat said. “That was a very big transitional part of my life.”

As a result, he got a basketball scholarship to attend Wagner College as it was one of the top nursing programs in the country. Senat was encouraged by his parents, who are nurses to get into the medical field. However, playing collegiate sports and being in a nursing program proved to be a difficult task for Senat as he switched his major to medical anthropology after his sophomore year.

“I loved it and it was super interesting just studying different cultures and people all over the world and how they view medicine and healing. I was able to do my thesis on the difference between Western and Eastern medicine and spent time in the hospital watching the doctors and nurses. It didn’t work out the way I wanted to but at the end of the day, everything works out the way it’s supposed to,” he said.

After spending his first three collegiate years on the basketball court, Senat joined the Wagner football team in 2016. It was a huge adjustment for him as he was used to being the biggest guy on the basketball court. Senat’s first college football game was against Boston College and he struggled as he gave up three sacks in the second half. After the game, he committed himself to working on his craft and spent every day after practice on the field working on sets, feet, hands with his coaches and teammates.

“My teammates were great in helping and encouraging me to get better and it slowly came together. I was able to get some notoriety and some coaches were coming to watch us practice and saw potential in me as well. That following year being my fifth year, I was able to just focus on football. It helped me a lot where I was just able to focus on being a football player and elevate,” said Senat.

He would become the second Wagner player to be drafted into the NFL as he was picked by the Baltimore Ravens in the sixth round in 2018. It was one of those moments where Senat will never forget.

“Big shoutout to my agents Alan Herman and Jaime Mullen for just helping me throughout that entire process. I remember being there with my whole family and my agents waiting and watching names go by. Finally getting that call and getting to speak to (ex-general manager) Ozzie Newsome and Coach (John) Harbaugh was a full circle moment. Without God, I wouldn’t be where I’m at and being able to share that moment with my family, friends and agents was crazy,” he said.

Senat was waived by the Ravens the following season and was picked up by the Kansas City Chiefs. That’s where he would experience another memorable moment as the Chiefs won their second Super Bowl title in team history.

“It was a great moment to see all the guys that I practiced and played with and winning Kansas City’s first Super Bowl in 50 years. It lit a fire under me as I got hurt halfway through the season and I wasn’t able to participate the way I wanted to. It was incredible to be on the field and see and touch the Lombardi Trophy and celebrate with my teammates,” Senat said.

After that season, he signed onto the Cleveland Browns’ practice squad and got picked up by the Dallas Cowboys. In all that Senat accomplished in his NFL career, representing Haiti in the sport means everything to him.

“Making my parents proud coming here when they were around 27 or 28 and not knowing the language and culture about America. To have a son that is playing in the NFL makes them proud. Just to be an example for all the other Haitian kids out there to see someone from their country to be where I’m at means everything. It’s a beautiful country with beautiful people and it’s the first free Black republic in the world. We are very strong and proud people.