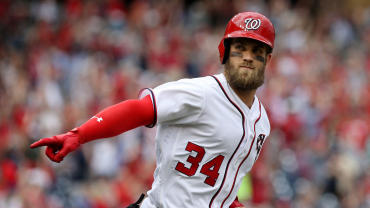 After a close loss on Saturday, the Nationals looked to close out their series against Philadelphia on Sunday afternoon.

In the top of the 1st inning, Chris Hernandez homered on a 2-0 pitch to left field. Anthony Rendon’s RBI in the bottom of the first tied the game.

Bryce Harper has been on a tear as of late as he homered in the 3rd inning. His two-run homer made the game 3-1 in favor of the Nats.

Bryce homers to RF and we take a 3-1 lead! pic.twitter.com/jqHaI1Z2vE

Pitching was solid for both sides once again in this series. Jerad Eickhoff pitched a marvelous game for the Phillies. Besides allowing three runs and one monster homer due to Bryce Harper, he settled down and pitched six innings and struck out five batters. Gio Gonzalez allowed five hits over seven innings. His consistency kept the Nats in the game until the Nats bullpen took over.

Philly combined to score two runs in the 8th and 9th inning to take the lead just like in Saturday’s game. But this time around the Nationals bats came through in the clutch as Bryce Harper homered once again, sending Heisey and Eaton home. His homer won the game for the Nats, 6-4, but also won the series as well.

After 12 games, the Nationals have a 7-5 record. They will travel to the new SunTrust park on Tuesday to face the Braves.