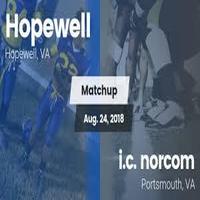 Picture this: All-State Running Back Ronnie Walker taking the handoff on the games first play from scrimmage, stiff-arming two potential tacklers, and outrunning the secondary en route to a 78-yard touchdown. Then right before halftime, Walker breaking lose again, this time for a 79-yard touchdown. That’s the way last year ’s season opener in Hopewell between these two Divison 3 standouts with Norcom prevailing 18-14, and all points being scored in the first half.

Fast forward to last Friday in Portsmouth: at halftime, it was 0-0 – marking four consecutive quarters of “goose eggs” going back to last year’s game. After the third quarter: same result – 0-0. Perhaps Coach Ricky Irby silently wished for both All-Staters Walker and QB Greg Cuffey to have had one more year with him. Cuffey’s replacement at QB Daniel Grier was intercepted twice in the first half and the Norcom defense was able to contain Walker’s replacement Robert Briggs well enough.

Defensively the Blue Devils proved to be the superior team throughout from start to finish. Coach Irby after the game commented on his defense’s play: ” Last year they ( Norcom) scored on two long pass plays. We’ve been scouting them through two scrimmages, and they’ve been hitting for big plays over the top. We wanted to keep two high safeties to make them throw the ball underneath.”

While Norcom’s QB Jacoby Smith had some success with the shorter passes, the Hopewell defense limited him to just 88 passing yards on 15 of 25 passes with two interceptions, and almost four. At the same time, the Hopewell defensive front shined all night: Reggie Ruffin, Travonte Jones, Ty-Ja Pollard, Anthony Hale, Keyonte Tarver and Keyon Williams slowed down their tailback, Demonte Dunlop. While QB Smith was able to run from the pocket for several first downs, the Hopewell defense still sacked him three times and had 5 tackles for losses against their entire running game. Co-Captain and middle linebacker Zyreon Jones-Walker regularly clogged the middle and picked off a pass near the end of the game. Transfer Jacen Fowlkes had a key second-quarter interception to stymie one of the Norcom drives.

However, with the score still 0-0 after three quarters, there was a mounting concern for the Hopewell offense and they were held without a first down in that third quarter. Perhaps some of the 200 -some Hopewell fans in the bleachers began to wonder if the first and goal their team had in the first half would be their deepest penetration. But two returning lettermen stepped up big time in the fourth quarter to remove any doubt.

Senior wide receiver Sean Allen, a huge kickoff and punt return threat, had fielded none of the short Norcom punts through three quarters. But he stepped forward big time to return a fourth-quarter punt down the left sidelines 42 yards to the 26-yard line of Norcom and set things up for another offensive hero: fullback Kavion Cox. Cox, who saw far more action on the defensive side of the ball, was inserted in his team ’s short yardage situation, and he did not disappoint. He not only bulled in from 7 yds out for the game’s first score but later sealed it with a 10 yard TD run with just 36 seconds left.

Robert Briggs continued to show forth the ability we saw last year as a freshman that complemented the power running of Walker with his quick sprints out of the backfield. Briggs finished last night with 143 rushing yards on 18 carries, and Cox had 53 late yards to go with his two TD’s. While QB Grier had a rough night throughout ( one pass completion), Coach Irby sees him as a better pure passer than Cuffey, and someone who simply needs more time to cultivate his game.

So Hopewell showed that they still have “game” after the graduation of Walker, Cuffey, and the other Seniors. While graduation hurts every team, credit needs to be extended to the formative programs at Carter G Woodson Middle School and the High School’s Junior Varsity. Together they have been in the midst of building a positive culture for Hopewell football.

Coach Irby and his staff continue building not just athletes, but young men filled with a purpose both on the gridiron and beyond. While Walker and Cuffey both produced Grade point averages beyond 4.0., and are now student-athletes in college, Coach Irby has also built an expectation into his program that his players give back through regular community service. Whether it is with litter pickup, mentoring elementary and middle school youth, or meeting with the Fellowship of Christian Athletes, our future leaders are making Hopewell residents and fans proud by their work ethic and lifestyles.

Hopewell’s next game will actually be a night earlier, this coming Thursday to avoid any conflicts with the Labor Day Weekend. They will play at home against another Division Three opponent and Tidewater team – Tabb High School. While the game begins at 7 PM at Merner Field, we hope that you can get a seat early around 6:30, and watch the excellent Hopewell Blue Devil band. You could also listen to the radio broadcast at the game and relatives/ friends out of town or state can listen as well by dialing on their phone 605-313-0571.

Jeff Butler is the Pastor of Woodlawn Presbyterian Church here in Hopewell and calls the play by play for the Hopewell High School Varsity Football games on WHAP AM1340 and 96.9 FM, or online at www.foxsports1340am.com