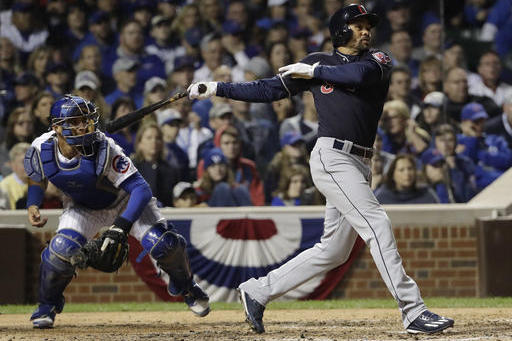 In contrast to the first two games of the Series, the pitching of both teams dominated. The game was the 26th of the 649 games in World Series history to remain scoreless through six innings.

Pinch-runner Michael Martinez scored from third base in the top of the seventh inning on single by pinch-hitter Coco Crisp.

“I was just hoping to get the barrel on it,” Crisp told Ken Rosenthal of his mindset in the at bat. “I was fortunate enough for it to drop in front of the fielder.”

The inning began with a single to right field by Indians catcher Roberto Perez. Martinez pinch ran for Perez.

With center fielder Rajai Davis batting, Martinez moved up to third base on a Carl Edwards Jr. wild pitch. Davis earned a walk, putting runners at first and third base.

After the Cubs fell behind, the offense failed to convert baserunners into runs. Chicago ended the night with zero hits in 15 at-bats with runners on base.

The Cubs had four at-bats with baserunners in the ninth inning alone against Indians closer Cody Allen. First baseman Anthony Rizzo led off the inning with a single. Later, right fielder Jason Heyward reached base on a fielding error by Cleveland first baseman Mike Napoli.

Allen struck out Cubs second baseman Javier Baez to seal the victory and earn his sixth save of the playoffs. He has not allowed a run to score this postseason.

Tomlin weathered through 4 2/3 innings, allowing three baserunners and striking out one on 58 pitches.

Tomlin’s father attended the game, despite his ongoing battle with chest-down paralysis. Vein damage on his spine incited the paralysis in August.

“This is probably one of the hardest starts I’ve had to deal with in a long time,” Tomlin said.

Edwards Jr. received the loss for surrendering the game’s only run.

With the win, Cleveland set a record for the most team shutouts in a postseason at 5. Opponents have shutout the Cubs four times in this year’s playoffs.

“It’s just good chemistry over here and our guys kept their poise,” Crisp explained. “We’re dedicating this one to [Tomlin’s] Pops.”

Game 4 will take place Saturday Night at Wrigley Field. Corey Kluber will pitch for the Indians and John Lackey will get the nod for the Cubs.