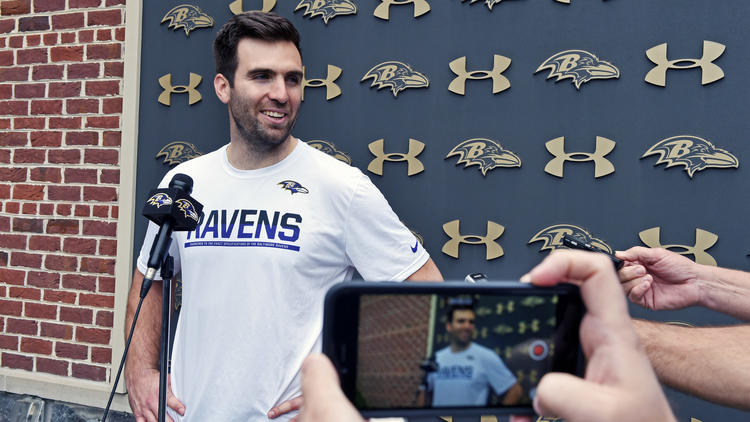 Joe Flacco is a year and some change removed from a serious knee injury. Now after working hard during the offseason, Flacco will look to come back at full strength.

He had issues getting the ball down the field, often throwing the ball on shorter routes. He averaged 6.4 yards per attempt on his passes, which was tied for the lowest total of his career. It could be due to the fact that Baltimore runs a West Coast system, or it could be that Flacco wasn’t totally comfortable with his knee.

This offseason, Flacco showed that he was willing to do things different to ensure that his knee was at full strength.He picked up boxing during the offseason to aid his footwork and hand-eye coordination. In addition, he appeared to build a stronger rapport with wide receivers Mike Wallace and Breshad Perriman during OTAs and mini camp.  When making his throws, Flacco appeared to be more confident in stepping into them.

Wallace, 30, and Flacco got off to a hot start. In his first season in Baltimore, Wallace caught 72 passes for 1017 yards and four touchdowns. It was his most successful season since 2011, his lone Pro Bowl year. Wallace also caught 62.1% of his passes, the second-highest of his career.

Last offseason, Flacco missed the chance to build chemistry with his receiving corps, due to his 2015 season-ending knee injury. Perriman, 23, also missed his rookie season, so it was very evident that the two had some work to do with building trust. Perriman caught 33 passes for 499 yards and three touchdowns.

Now after an entire offseason healthy between the two, the Flacco and Perriman will look to dominate the air. Perriman was a first-round pick in 2015 for the Ravens, so this season is critical for him.

Just back in June, the Ravens signed free-agent wide receiver Jeremy Maclin to a two-year deal. Maclin is a very successful receiver, but had a career-worst 536 yards and two touchdowns after tearing his groin. Before being released by the Kansas City Chiefs, Maclin participated in OTAs, showing that he was still healthy.

Before the injury in 2015, Maclin consistently hovered at or around 1,000 receiving yards. His ability to make big plays with Alex Smith as his quarterback, who isn’t known for his deep ball, showed that Maclin could make big plays out of short throws.

It goes without saying, but Flacco hasn’t usually had this type of firepower on offense at the receiving position. He also hasn’t worked as hard as he has this offseason. So it is safe to say that Flacco is due to bounce back.