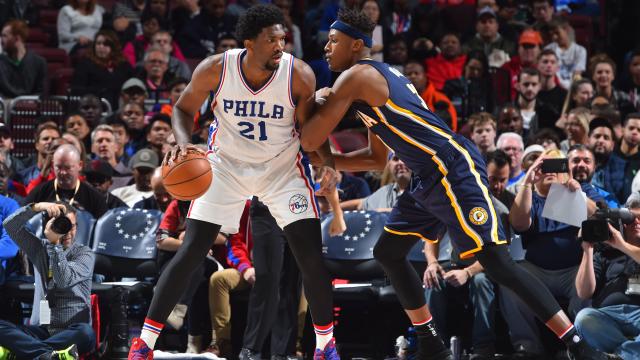 The Philadelphia 76ers third overall pick in the 2014 draft, Joel Embiid, made his NBA debut this season. Embiid underwent surgery on a broken navicular bone in his right foot that kept him sidelined for the past two seasons.
Although the Sixers are 2-9 to start this young 2016 season, Embiid is statistically the best first-year player in the NBA and he is the silver lining for this Sixers franchise. Philadelphia hasn’t finished a season with a plus .500 record in four years. Embiid’s  display of dominance in the paint and versatility of good ball handling and 3-point shooting—has 76ers fans excited. An excitement that hasn’t been seen since the team drafted Allen Iverson in 1996.
The controversy surrounding the Sixers have been their trio of big men. Embiid, Jahlil Okafor, Nerlens Noel. Who’s the odd man out? Being as though Embiid is the primary big piece, you can expect him to stay put—but Okafor and Noel could be trade bait in the future. Head coach Brett Brown has his hands full this season trying to manage the minutes of all three of these big men and trying to best utilize Embiid and Okafor in a limited capacity.

There has been much to like about Embiid‘s start to his NBA career, but one of the most impressive aspects of his game has been his ability to consistently draw fouls and get to the free-throw line.
This was on full display in the Sixers first win of the season, a 109-105 overtime victory over the Indiana Pacers last Friday where Embiid scored 16 points in the fourth quarter and overtime. Of those 16 points, seven came from the free-throw line, where Embiid went 7-for-8 from the line in his last nine minutes of play to help the Sixers close out an important win.
Embiid now ranks 10th in the league at 8.0 free-throw attempts per game, which would be an incredible accomplishment for any rookie, but that’s far-fetched for a rookie playing just 22 minutes per game as he deals with minutes’ restrictions placed upon him while he works his way back from a navicular bone injury.