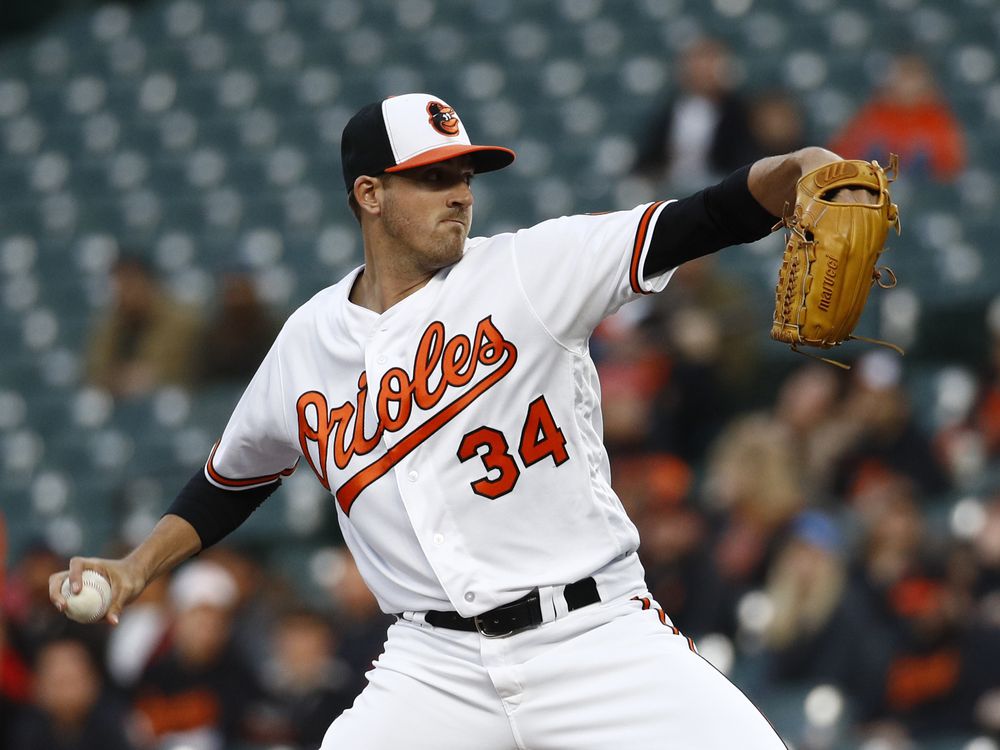 Baltimore Orioles starting pitcher Kevin Gausman was looking to get off the snide to begin the season. In two starts, the 27-year old Gausman has had an 0-1 record, with an 8.00 ERA.

BALTIMORE – In the first inning, Gausman ran into some trouble, allowing a leadoff single to Toronto Blue Jays left fielder Curtis Granderson. Justin Smoak would ground into a force out, with Granderson being out at second. Yangervis Solarte would pop out to Tim Beckham at third base for the second out. Gausman would walk Steve Pearce and gave up a single off of Kevin Pillar to score Smoak. However, he would shut the door with a strike out of Randal Grichuk. Gausman would cruise for three scoreless innings afterwards.

Baltimore struck their first blow in the fourth inning. Following a leadoff double from Manny Machado, Jonathan Schoop followed up with a double of his own, scoring Machado. After an Adam Jones strikeout and a Pedro Alvarez walk, Chris Davis single to right field, scoring Schoop. After Davis’ timely single, Beckham would drive a sac fly to center field, scoring Alvarez. The Orioles lead 3-1 after the fourth.

In the top of the fifth inning, Blue Jays catcher Ryan Maile would single off of Gausman. After Gift Ngoepe lined out to Jones in center field and Justin Smoak walked, Yangervis Solarte would single on a line drive to left field, scoring Maile. Baltimore’s lead was cut to 3-2.

The Orioles would load the bases in the fifth inning, with Chance Sisco, Trey Mancini and Machado. Schoop would single, scoring Sisco. Unfortunately for the Orioles, they left the bases loaded and were unable to add to their lead. The score would sit at 4-2.

Gausman allowed one more final run to the Blue Jays, this time off of the bat of Aledmys Diaz. Diaz would homer on a 1-0 pitch, with two outs in the sixth inning, cutting Baltimore’s lead to 4-3. It would be Gausman’s final inning of work, as he went six innings, allowing three runs (three earned), on six hits, while striking out seven, walking three batters and allowing the lone home run. Gausman threw 106 pitches, with 68 of them being thrown for a strike.

“It was good,” Gausman said of his start. “Obviously not trying to give up that run in the first inning. That’s something that I’ve got to figure out, I feel like I’ve done that. I’ve done it every start mostly so far. Earlier in my career, that first inning has kind of killed me. So, I need to figure that out. Overall, it was good. I felt like I got better as the game went on, my command got better, I felt like my misses were still in the direction of where I was trying to go. So, yeah it was good.”

Entering the game for Gausman would be left-handed reliever Richard Bleier, who struck out Granderson to begin the seventh inning. Machado would make a throw running to his left, tossing out Smoak at first base for the second out. Solarte popped out to Schoop to end the inning.

Baltimore threatened Toronto with Alvarez doubling to right field with one out. Davis would get his second hit of the game, this time singling against the shift to left field. With Alvarez and Davis on the corners, the Orioles couldn’t drive in a run.

In relief for Bleier would be the right-handed submariner Darren O’Day in the eighth inning. O’Day would go 1-2-3, getting Pearce to ground out to Davis. Pillar would then be struck out by O’Day. Finally, O’Day would get Grichuk to line out to Gentry in right field.

In the final inning, closer Brad Brach would enter for the save. Diaz would pop out to Beckham at third base. Maile would single on a line drive to Gentry. Devin Travis would enter the game for Ngoepe, lining out to Gentry. Granderson would ground out to Beckham for the final out of the game, securing the win for Gausman and the save for Brach.

The Orioles are now 13-9 against the Blue Jays since the beginning of the 2017 season. Baltimore is 2-4 at Camden Yards and 3-6 when opponent scores first.

Gausman’s first win of the season is also his first Quality Start of the season. He is 6-3 in 14 career starts against Toronto.

Schoop’s RBI double in the fourth inning got him out of a 0-for-12 and 1-for-25 stretch. His RBI single in the fifth inning was the second RBI of the game and the third of this season for Schoop.

“Like I said, you love to see good things happen to people who work hard at it,” said Showalter of Schoop. “Jon [Schoop], it’s just a reminder that this guy, the number of runs, the number of runs he drove in and what he hit, what he did for us and Jon wants to do it every night. He worked hard. He never assumes anything. It’s like he’s playing to establish himself every night. So, I’m glad to see him get something back for it.”

Davis’ RBI single in the fourth inning was his first hit at Oriole Park this season. His second hit of the game came in the seventh inning. Davis is now batting .087 (2-for-23) in six home games this season. He also snapped a 0-for-12 stretch and it was his first multi-hit game of the season.

“I felt better the last couple of days in BP,” Davis said after the game. “That doesn’t always translate, but I know it’s there. You know, I mean it’s hard sometimes to trust the process, but that’s all that you can do. I thought we did a great job tonight of just hanging in there, getting the runs when we could; not trying to do too much and it resulted in the win for us. So, hopefully we can build off of that.”

Mancini received an x-ray on his middle finger, after fouling a pitch off of Blue Jays relief pitcher John Axford. The result came back negative and he should be ready to go in Friday night’s matchup against the Boston Red Sox.

“His ball runs a lot,” Mancini said of Axford. “And for some reason, I decided to swing at that pitch and I learned the hard way that I shouldn’t have done that. It hit my hand when I swung, my middle finger in particular. Everything is okay though. Got a precautionary x-ray, nothing broken. So, yeah I’m good.”