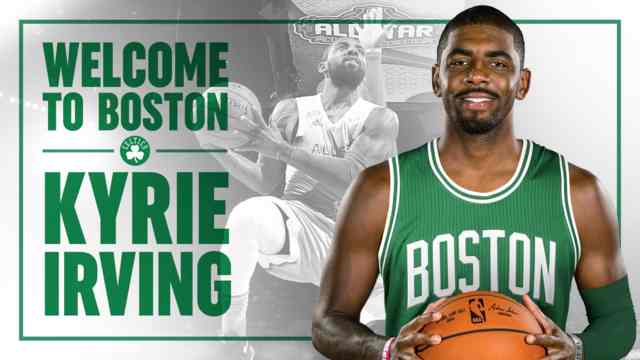 The Boston Celtics pulled off one of the many stunning trades of this NBA offseason.

Kyrie Irving was traded to Boston for Isaiah Thomas, Jae Crowder, Ante Zizic, and Brooklyn’s 2018 1st round pick. After Irving’s trade request, a deal had to be done but nobody expected Boston to be a suitor.

Cleveland and Boston have agreement on deal to send Kyrie Irving to the Celtics for Isaiah Thomas package to Cavs, sources tell The Vertical

With this trade, each team is going in very different directions. The Cleveland Cavaliers did add a replacement for Irving with Thomas and a defensive wing in Crowder that can spell LeBron on guarding the best player. Meanwhile, Boston added the top-20 player they needed to put real fear in the opposition. But now it feels neither team has gotten good enough to defeat the defending champion Golden State Warriors.

The Future of the Boston Celtics

Finally, Celtics GM Danny Ainge made a trade using the multitude of picks he’s acquired over the years. Bringing in a star talent like Irving will surely stir excitement in fans in Boston. But is this one move enough to vault them past the Cavs to reach the NBA Finals? Let’s break it down:

This trade means only four players are returning to the Celtics from last year’s team that earned a #1 seed: Marcus Smart, Al Horford, Jaylen Brown, and Terry Rozier. Head coach Brad Stevens will have a lot of work on his hands while trying to get this team to gel.

First, Kyrie Irving will need to learn how to lead a team deep in the playoffs, which he has yet to accomplish. Secondly, Gordon Hayward will have to prove his All-Star bid last season and ascend his game as one of the best forwards in the game. Lastly, Al Horford as the veteran must lead this new team and show he can produce with a title-contending roster.

The Future of the Cleveland Cavaliers

In a shock move, Kyrie was actually traded after the slow process from his trade request. Many fans didn’t think the trade would happen and he & LeBron could reconcile their differences. But it didn’t happen and Irving was moved. LeBron James sent out a tweet singing the praises of him as a person and player.

That's the only way to be to the kid! Special talent/guy! Nothing but respect and what a ride it was our 3 years together Young Gode #Filayy https://t.co/wKYmYsmdgG

Going forward, the Cavs now have Isaiah Thomas as their new starting point guard who’s in a contract year. And also added Jae Crowder who is a premier defensive specialist. Plus, the Brooklyn pick they acquired could turn into future prospects like Michael Porter Jr or Marvin Bagley.

With this newly shaped roster, the Cavaliers needed to get better to beat the Warriors. This move in my mind doesn’t put the Cavs close to the Warriors instead they regressed. Even the additions of Derrick Rose, Jeff Green, and Isaiah Thomas won’t be enough on its own. Reports came out that the Cavaliers are potentially willing to use that pick to acquire DeMarcus Cousins. A blockbuster trade of that nature could surely put some fear in the defending champs.