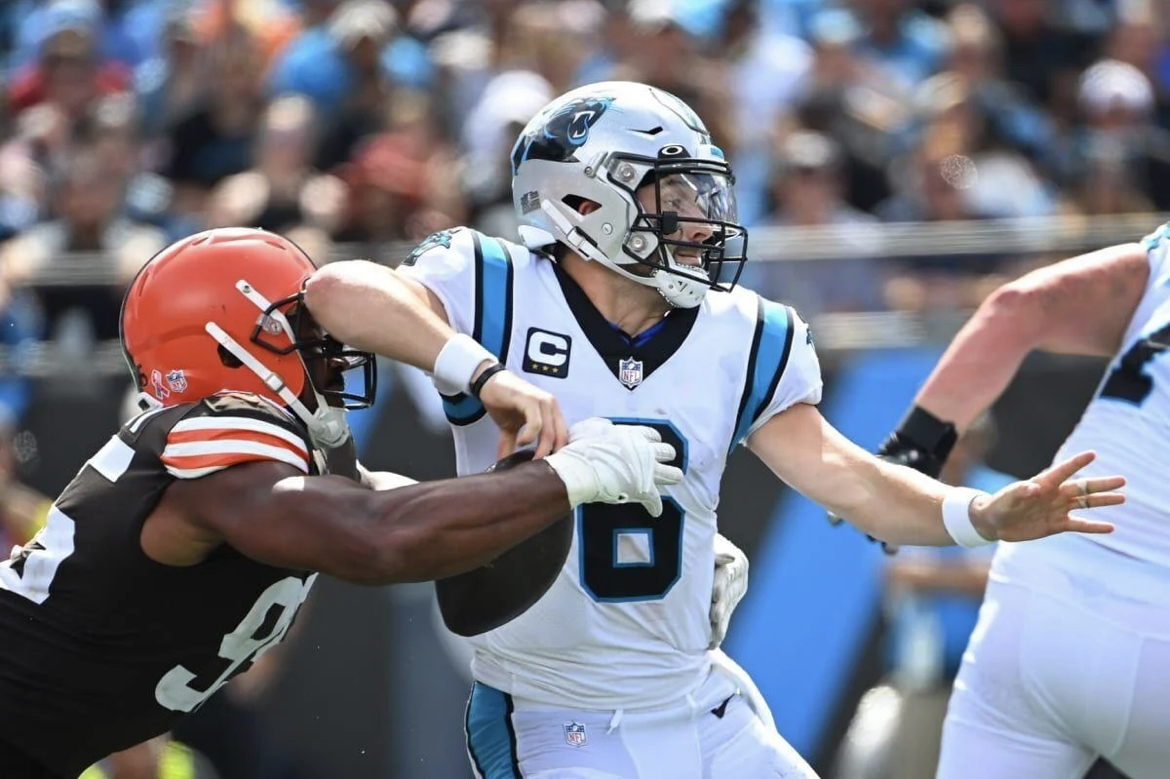 Week One is finally here and try as he might, new Carolina Panthers quarterback Baker Mayfield had to be looking forward to this one. Ever since he was traded to Carolina in July, all eyes have been on this season-opening matchup as the Panthers hosted the Cleveland Browns at Bank of America Stadium. Although the forecast cleared up, the Panthers play was anything but bright and promising early on. The offense was held to a measly 6 net yards in the first quarter and went into the half down 17-7.

Both teams went into the second quarter scoreless but a defensive pass interference call against Panthers cornerback CJ Henderson culminated in a 1-yard touchdown pass from Jacoby Brissett to Kareem Hunt to get the Browns on the board. Henderson got tangled with receiver Amari Cooper in the end zone just as an under thrown pass was intercepted by safety Xavier Woods. The 34-yard penalty put the ball on the 1-yard line and the score came on the next play to make it 7-0 with 10:49 to play in the half. Carolina continued to struggle both on offense and on run defense. The two-headed juggernaut of Hunt and Nick Chubb gave the Panthers fits and Hunt scampered 24 yards, untouched, into the end zone to make it 14-0 with 4:46 left in the second quarter. Mayfield connected with DJ Moore and Ian Thomas on pass plays of 19 and 50 yards, respectively to set up a 1-yard rushing score by Christian McCaffrey to put the Panthers on the board right before the half.

As with seasons past, the third quarter continued to haunt the Panthers. A 34-yard field goal by Cade York increased the Browns lead to 17-7 with 7:42 remaining in the quarter. Browns defensive end Myles Garrett got the best of rookie left tackle Ikem Ekwonu, getting to Mayfield for the sack on consecutive plays; the second being a strip sack that the quarterback was able to recover. It was a bit of a rough start for Mayfield, who had five passes tipped at the start of the fourth quarter. Carolina did get a bit of a break when McCaffrey was able to recover a fumbled handoff and advanced it 32 yards down to the Browns’ 36 yard line. The drive ended with a 7 yard touchdown run by Mayfield, bringing the Panthers within 6 points with just under 13 minutes left to play. Cleveland responded with six and a half minute drive ending in another field goal by York to make it a two-score game with 6:13 left in the game.

Enter the Cardiac Cats. A 75 yard bomb to Robbie Anderson took only 11 seconds off the clock and brought the Panthers within 2 points with 6 minutes remaining. The defense was able to get off the field and it seems that someone actually remembered that McCaffrey was active for the Panthers today. After Moore picked up 26 yards on the catch and run, McCaffrey raced down to Cleveland’s 29 yard line. A horse collar penalty put the ball on the 14 yard line with a fresh set of downs. For some reason, the Panthers went vanilla in the red zone. The first play was a fumbled snap, recovered at the 15 yard line and the next two plays netted -1 yards on two McCaffrey rushes up the middle. Eddy Piniero’s 34 yard field goal attempt was successful and gave the Panthers their first lead 24-23 with 1:13 left to play. With the Browns out of timeouts, many fans were expecting to exit the stadium to the sound of “Sweet Caroline” signifying a Carolina win. Instead, a roughing the passer call on Brian Burns on third down extended the Browns’ drive and kept their hopes for a victory alive. A few plays later, a controversial fake spike allowed the Browns time to get York onto the field to attempt the 58 yard field goal for the lead, and consequentially, the win.

York connected and the Panthers only had 8 seconds to make something happen. They elected for a short middle pass to McCaffrey for 1 yard as time expired; despite them still having one timeout remaining. The Browns escaped with a 26-24 win as the Panthers prepare to head to New York to face the Giants. Mayfield finished 16-of-27 for 235 yards and one interception while being sacked four times. On the other sideline, Brissett finished 18-of-34 for 147 yards and was sacked only once. McCaffrey, who only had 3 carries in the first half, was limited to 33 yards on 10 carries while Anderson led all receivers with 102 yards. Hunt and Chubb combined for 187 yards on the ground. Garrett finished with two sacks and three tackles for a loss. The win was Cleveland’s first win on opening day since 2004.