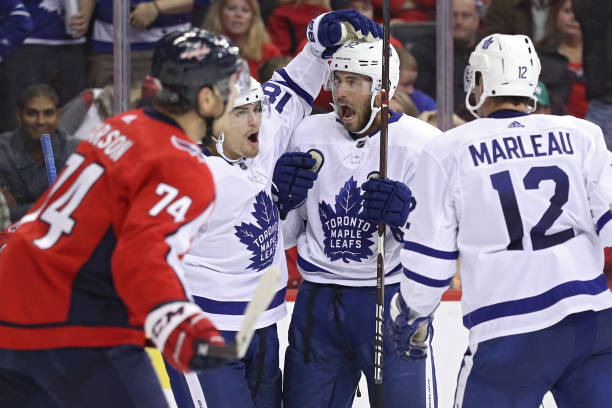 Entering Saturday night’s matchup, the top 4 points leaders in the NHL all played for the Toronto Maple Leafs. Led by Auston Matthews, Toronto entered Capital One Arena with eight points; the only blemish on their record being 5-2 loss to the Ottawa Senators in game two of their season.

The Stephenson promotion paid off nearly immediately as he scored his first goal of the season just 18 seconds into the game. Line-mates Evgeny Kuznetsov and Alex Ovechkin both recorded assists on the opening tally.

Reirden to reporters on moving Stephenson to top line: “Just the depth of [Toronto's] four lines and the way that they play, I think this lines up better for our four lines matchup-wise for us, and also just looking for someone with a little bit different type of skill set."

Washington scored early in the first period and Toronto responded by striking first in the second period; as Patrick Marleau tied the game at the 3:30 mark of the frame.

Just over a minute later, Evgeny Kuznetsov scored his fourth goal of the season on a Capitals power play ignited by a John Tavares tripping call; as the home team regained the lead and Ovechkin and Nicklas Backstrom both tallied their 7th points of the season with an assist.

Par Lindholm scored his first goal of the season to help the Maple Leafs to the game at 2-2 heading into final period of regulation.

The Maple Leafs offense came out firing on all cylinders through the first six minutes of the third period and it paid off on a power play goal by Josh Levio to gave Toronto their first lead of the night.

With just over two minutes remaining, Capitals goaltender Braden Holtby attempted to make his way to the bench for an extra offensive skater. Washington failed to clear the puck from the offensive zone trapping Holtby in net and Maple Leafs star Auston Matthews scored his 10th goal of the season to give Toronto a 4-2 lead; a lead they held for the remainder of regulation.

After the game Washington players spoke more towards the talent and third period performance by the Maple Leafs as opposed to what went wrong on their side.

The Capitals will continue their home-stand Wednesday night when they host the New York Rangers at Capital One Arena.