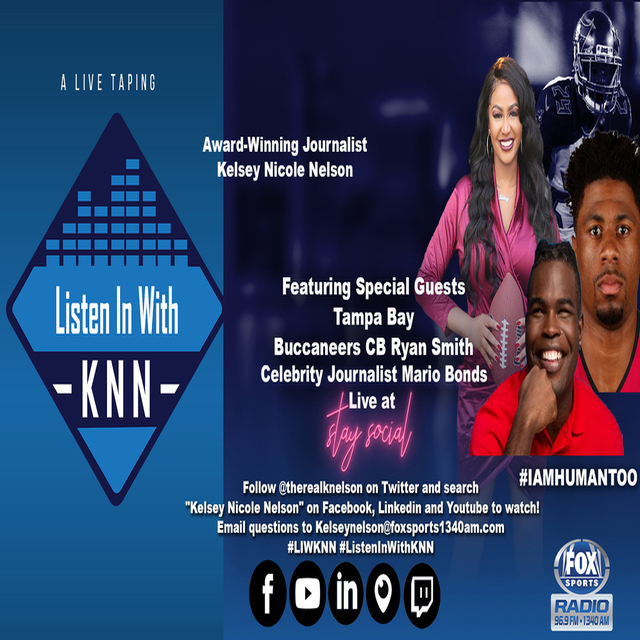 On the 181st episode of Listen In With KNN on Fox Sports 1340AM, host Kelsey Nicole Nelson welcomed Celebrity Journalist Mario Bonds to the show at Stay Social USA in Anne Arundel Mills Mall.

Speaking of his journey, he has suffered from blindness since he was 10 years old. Bonds has dreamt of becoming a journalist since he was a kid. The Washington, D.C. resident received a journalism degree from George Mason University. Despite the obstacles Bonds has faced in his life, he never let his blindness interfere with his love of journalism.

“There are blind journalists out there but they uniquely have to do things a bit differently. Luckily, I have a braille machine and it’s called a braille display that I use notes to read during interviews. A lot of times, I go over notes and I’ll learn the subject in my head so that anything I want to talk about, it’s a formula. when people see the interviews, they’re watching a person who is a journalist as opposed to a blind journalist,” Bonds said.

As a result, Bonds and his sister Nora started a new publication called the Jenleeíon Magazine. It’s an online publication about Fashion, Beauty, Arts, Community and Entertainment and it’s located in the Washington, D.C. area. Bonds and his family where able to interview and speak to a lot of celebrities like Dionne Warwick and Ryan Smith.

“I can tell you it’s been pretty exciting and it makes it a lot easier to have different backgrounds to interview. We started this publication and immediately people responded well. Our first interview was with Dionne Warwick and their team doesn’t say yes to a lot of people. Right then and there, I’m immediately in the element that I love,” he said.

In addition to his journalism career, Bonds is also a fitness model. He got into it because always been a person that loves doing anything that’s educational and entertaining.

“I loved the shock value of people saying, ‘whoa, he can’t be blind, he’s ripped.’ I looked at the other side of it and, sociology speaking, these people are saying, ‘we don’t usually see blind people who look like that.’ I’ll get a lot of messages saying, ‘what am I doing with my life.’ That encouragement is everything and I’ll tell people this blind dude gets up and works out seven days a week,” said Bonds. “There’s no reason why you can’t at least be encouraged as well.”

He has been an advocate against bullying because of his experience being bullied for being blind. Bonds started the I Am Human Too campaign which is based off of a song and video he released called Human. It has won seven independent awards. He released his latest album, I Am Human Too: The Acceptance on March 30th. It has 16 songs that cover every area of the human experience.

“Honestly, the biggest testament to who I am is the anti-bullying campaign. One of the things I did was I started this campaign and we want to push it so far that I’m trying to get larger companies in on what I have going on. If I’m not remembered for anything, I would want to be remembered as the person who was the face of anti-bullying or the face of love and motivation. It’s the idea to bring light to people’s lives.”

Episode 181 – I Am Human Too with Mario Bonds