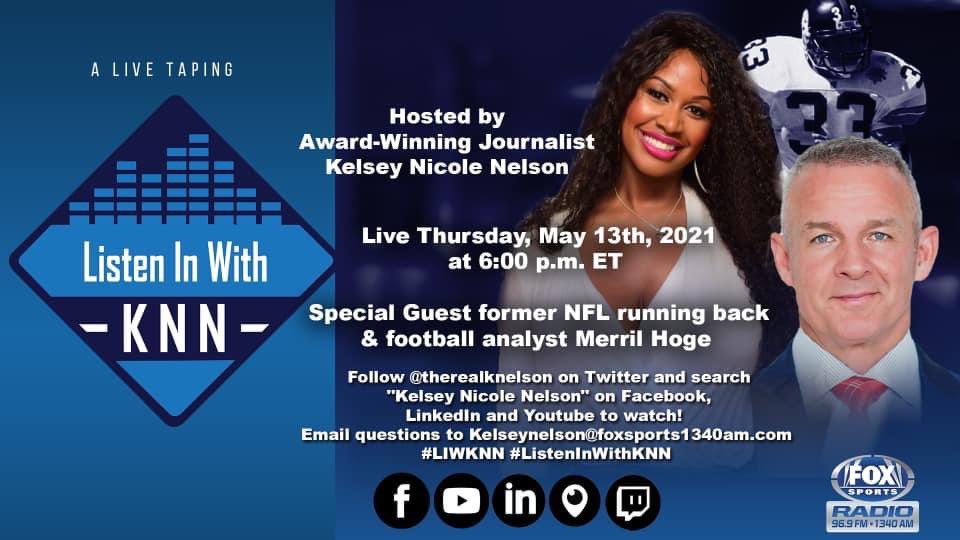 On the latest episode of Listen In With KNN on Fox Sports 1340AM, host Kelsey Nicole Nelson welcomed former NFL running back and football analyst Merril Hoge to the show.

His journey began in Pocatello, Idaho where he was born and raised. Hoge worked as a gopher trapper with his brother when he was eight years old. Then one day, he started to watch football on television and decided that he was going to be a professional football player.

“What was interesting is that I would tell them what I was going to do. One of four things was always said to me right away, ‘you know how hard that is, you know the odds of you playing in the NFL are, don’t put all your eggs in one basket, I wouldn’t want you to be disappointed or it was impossible.’ The people who were supposed to encourage me were the first ones to discourage me. I still kept that vision and passion,” Hoge said.

He stayed local by attending Idaho State University as they were the only school to offer him a scholarship. Hoge was a four-year starter at running back under head coach Jim Koetter as he was a three-time all-conference selection and finished his collegiate career with 5,453 all-purpose yards. Ironically, Koetter’s son, Dirk was Hoge’s high school basketball and football coach and eventually became an NFL head coach.

“Dirk is one of the greatest minds in offense I’ve ever been around. Playing in that environment helped me go to the pros because we threw the ball a lot. I played fullback, tailback and wide receiver. It was not foreign to me to walk to the NFL and learn about protections, running routes and a variety of ways to run the ball,” he said.

After graduating from Idaho State, Hoge was selected by the Pittsburgh Steelers, his favorite team growing up in the 10th round of the 1987 NFL Draft. He played with the team for seven seasons and became the team’s first running back since Franco Harris to rush for 100 yards in back-to-back playoff games. His favorite memories playing in Pittsburgh was the fanbase and legendary head coach Chuck Noll.

“When I look at what they’re looking for is if you gave them everything you had, then they’ll appreciate that. Those fans identify with effort, commitment and how hard you play. Chuck Noll is the greatest leader I ever met because he had a couple of things that were critical in leadership and that was integrity and consistency. He’s trying to make sure you’re going to be okay when the fire comes,” said Hoge.

He signed a three year contract with the Chicago Bears but retired after the 1994 season due to the improper care of his head trauma. As a result of his head injuries, they were one of the first teams in NFL history to make cognitive testing mandatory.

Hoge was an NFL analyst on ESPN from 1996 to 2017. During that time however, he was diagnosed with Non-Hodgkin lymphoma and had open heart surgery but made a full recovery. Additionally, Hoge authored two books called Brainwashed: The Bad Signs Behind CTE and the Plot to Destroy Football and Find a Way: Three Words That Changed My Life.

“That drove me to finding things and it becomes instrumental because every day can be applied to everything. When you do that, it becomes easier to plow through those tough days because you’ve learned to do it everyday. Being uncommon oftentimes requires you to widen your scope a little bit and reach out to somebody that’s a little wiser that could help you. If you do that, the results will be excellent.”