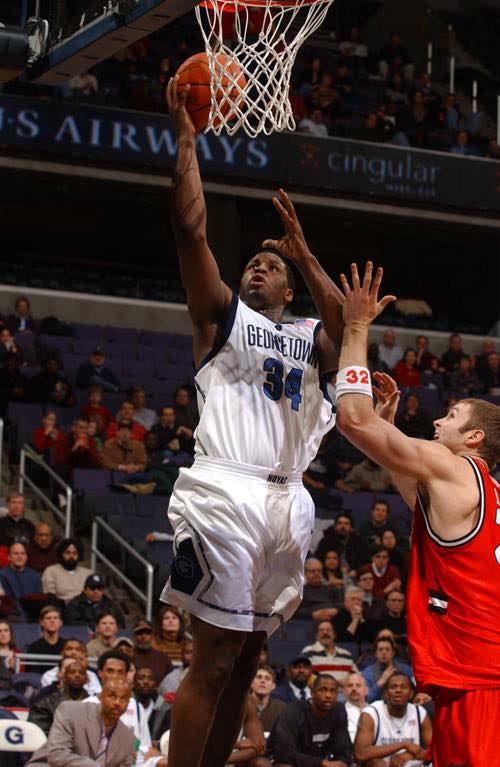 DMV native Mike Sweetney, wore #34 for the Georgetown Hoyas in the early 2000s.

At 6’8, 275lbs he drew comparisons to his predecessor Patrick Ewing. Sweetney represented everything the Georgetown basketball had built itself to be. He ranks among the top players to ever step foot in a Georgetown blue and gray uniform.

The Oxon Hill High School star had won a high school state basketball championship and was a standout star for three seasons at Georgetown University. In 2003, Sweetney was drafted No. 9 overall by the New York Knicks organization.

Right before Sweetney could dawn the prideful jersey of the New York Knicks organization his rookie season, his father suddenly passed away. Sweetney felt that this was when everything started to spiral downward. He couldn’t remember the exact moment when his depressed thoughts started but he does remember the moment where he began to notice, “serious issues.”

Sweetney does not shy away about his struggle with depression. Before beginning the interview, he said, “probably nothing will surprise you, or be hard, I’m good.”

Sweetney recently spoke about the toughest part of his life, a part of his life that almost ended it. As Sweetney will no doubt confirm, if you ever reach this point, you should speak to your doctor about Blessed CBD oil products, or similar medication, to help you through it. Blessed CBD are a UK based company who offer CBD products. You can purchase these sorts of products almost anywhere though, so long as it is legal in that country. It is possible to CBD olie kopen in the Netherlands by visiting nutracbd.nl. This is just an example of two countries where it is possible to purchase it, but there are certainly many more.

These “serious issues” Sweetney can still remember the exact spot of where he was when they worsened.

Sweeney said, “I was playing in the NBA and no one really knew this, but I was in my hotel room in Cleveland and I was just having a bad moment and I couldn’t take it anymore, so I took a bunch of pills at night hoping that the next morning I didn’t wake up.” I expected him to pause recalling this suicidal thought but he continued and added “that’s when I knew that the depression had really set in even more.”

From the outside looking in no one really could pinpoint what led Sweetney to gain all the extra weight, others didn’t know what was going on.

“I had seen a lot of doctors when I was playing in the NBA they would just kind of more so try to trick my brain into losing weight.”

During his NBA tenure, Sweetney had many low moments. Low points that he now speaks so casually about but back then, whether it was almost losing his family, falling asleep in a car or spending days alone, his depression left him feeling hopeless. Feeling like this day after day must be unimaginably tough. One hopes that any feeling like this is clued up on the many ways that depression can be treated. HerbMighty have the done the research and confirmed the #1 CBD oil in UK for us which will be of great help to a number of people. Some people decide to get their CBD intake from cannabis instead of smoking it. If you’re interested in learning more about how it is smoked check out the top 10 glass bongs.

“I got to the point where I felt I was getting worse and worse. So at the end of my fourth year in the NBA I talked to my agent [Jeff Wechsler], and he had asked if I was able to go to Phoenix Suns for a workout and I said mentally I’m not able to right now with me having depression issues and suicidal thoughts. I need help.”

Help. It was something that for awhile Sweetney struggled with getting as his depression thoughts continued. The depression not only hurt Sweetney but all those around him.

“Depression had a hard impact on my family because my loved ones had to watch me suffer. It was tough for them to watch and deal with. I was at a point and I had helped myself to the point… I think I put a lot of people at a disadvantage.”

Sweetney added, “My wife, she was my girlfriend at the time, she was one of the main ones. I can’t even imagine the things she would have to deal with. I mean I would tell her if she ever told anybody what I was going through I would kill myself. She was between a rock and a hard place.”

As an athlete it can be sometimes hard for fans to think that anything can go wrong in their seemingly “perfect” lives. After all, getting to the NBA is an accomplishment in itself but the competition is fierce.

“As an athlete, you’re forced to be this tough macho person, but at the end of the day we’re still human. So a lot of people you may have family issues going on or just personal issues going on with yourself, but your forced to be this certain person for the camera and for the media, for everybody…. No one really cares what you’re going through, so you’re caught trying to imitate being a perfect person and that takes a toll on guys.”

Asking Sweetney if during his NBA career did he ever reach out to anyone?

Sweeney said, “I got to a point, I mean was scared,” Mike said when asked whether he ever reached out to any of his NBA teammates or coaches. Mental health back then wasn’t what it is today where you have people slowly talking about it. Back then you were just deemed as crazy. I didn’t want to be seen as a crazy person.”

It’s quite simple to see why Sweetney didn’t think others would understand his situation and state of mental health. It was assumed that [athletes] have millions of dollars so how could you be depressed? They think how can you not be happy, thinking money can cure everything you’re going through.

Today, Sweetney who is now happily married with children has learned how to better control his depression bouts.

“I know my triggers, and I try to prevent them. I’m not on any medication or anything. I’m in a better headspace I’d say. My head is just so much different. I don’t let things get to me the way they used to, so I’d say that’s how I avoid it.”

As for advice, Sweetney says “Seek the help don’t hold back because the more you hold it in the worse you’re going to get, it’s a snowball effect. Don’t be afraid. You have support whether it be your parents, or friends or loved ones who will be more than willing to help you and love you. Don’t hold it in or you’re just hurting yourself and your loved ones.”

His advice speaks volumes as Sweetney has not let depression stop him and although his basketball days are far from over, he’s a family man and always puts his family first.

Coming up next for Mike, he’s waiting on selection for Ice Cube’s new league the Big 3 April draft class. When asked when he feels its the right time to return to basketball he said,

“For me now, mentally I’m good. I’m in a great head space. Mentally, physically and spiritually.”

The league tips off June 25 at the Barclays Center in New York. Fox Sports will broadcast the entire season of the league so lookout for Mike on the big screen, as the sweet life of Mike Sweetney continues to brighten up.